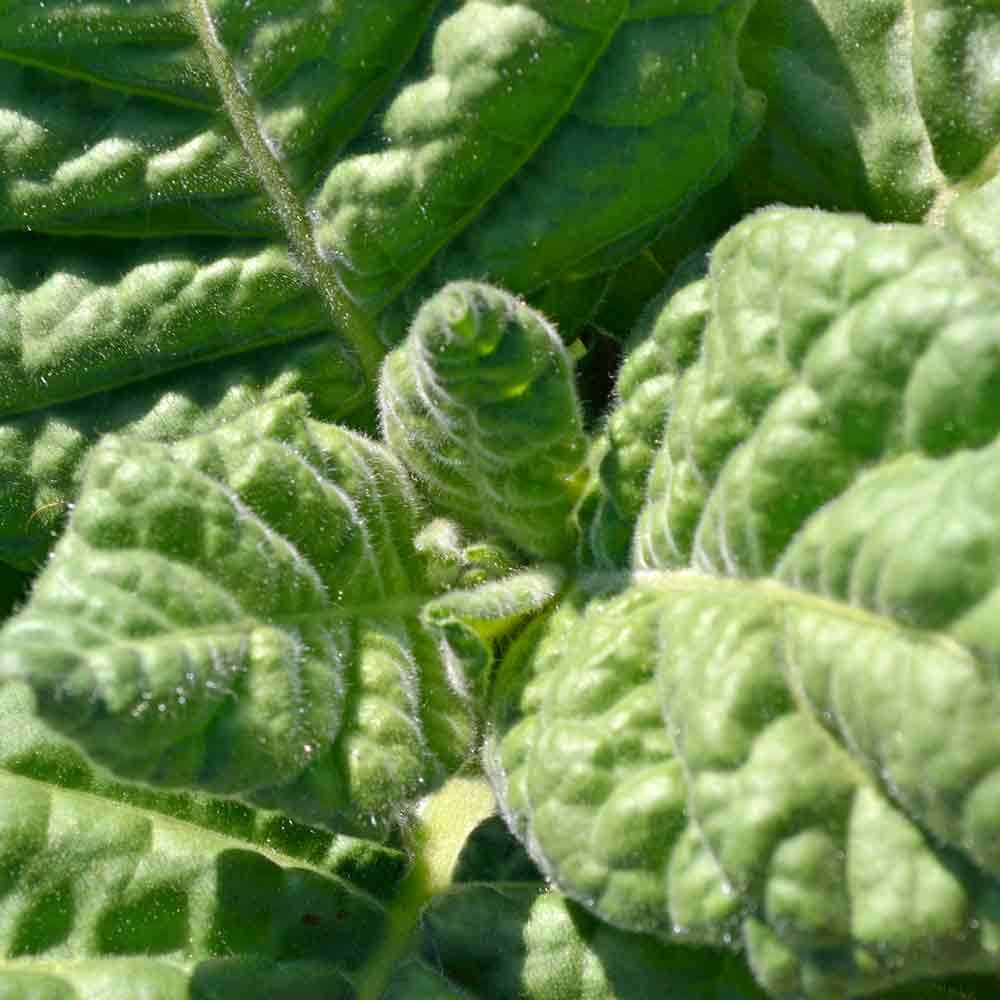 Out of Stock
Frequently bought together:

Hopi tobacco is an ancient, powerful, sacred, and useful plant, valued by home gardeners and Native Americans alike. It is easy to grow, is hardy and tolerant of poor soils and harsh climates, yet attracts several pollinator species with its abundant tiny flower clusters that open in the early evening.

More cold-hardy than other tobaccos, it grows slowly at first until established, then takes off. It grows 18-24" tall with large silvery green leaves topped by clusters of pendulous greenish-white flowers that open at sunset and emit a rich, jasmine-like aroma that can be smelled across the garden.

A longer growing season is needed for full leaf production but still produces well in cooler climates. The leaves contain up to 9 times the amount of nicotine compared to commercial tobacco, making it an ideal ingredient in natural pesticides against aphids and soft-bodied insect pests.

Our seed stock is from the Hopi tribe in northern Arizona and grown, harvested, and cleaned by hand in the western US.

Archaeological evidence suggests Indian peoples in the Andes region of South American began cultivating and domesticating about 7,000 years ago. The tobacco we know today possibly originated as a cross between two ornamental varieties, most likely on the western slopes of the Andes between Ecuador and Peru, where several indigenous cultures once flourished.

The practice of growing tobacco and using it in ceremonies spread alongside trade into Central and North America, reaching as far north as parts of Canada before the arrival of Europeans. It appears to have traveled northward alongside cotton and the Lagenaria gourd.

Hopi tobacco was reserved for special occasions and rites, as it was believed the tobacco smoke carried prayers to the Gods. Everything about the plant was sacred and powerful services were performed by specific tribal members, from sowing the seed and growing the leaves, to harvesting, curing, and using the tobacco in ceremony, as payment, and in medicine.

Ceremonially, tobacco is still an important part of Native American spirituality. When asking advice of an elder it is customary to offer tobacco in honor and thanks. When preparing the fire for the sweat lodge, tobacco offerings are given to the fire.

Studies as early as 1925 proved the high concentration of nicotine in its leaves makes it useful for creating organic pesticides. One recipe used equal parts finely ground leaves mixed with hydrated lime and water and let sit overnight. After filtering it was then sprayed on aphid-infested plants with excellent results. Remember that any insecticide does not choose and will kill beneficial and pest insects equally well, so be very careful how and where you spray!

Used extensively in rituals and religious ceremonies but also used for cramps, sharp pains, and headaches. A poultice made from the beaten plant is used for boils and applied to insect bites.

How to Cure Tobacco

To cure tobacco, pick the leaves when they have a tinge of yellow on them and hang them where the leaves will dry out during the day and pick up moisture at night. This is how they cure. When the leaves are completely golden brown and have no more green they are ready to roll. This can take a month or sometimes two. It is best to roll the leaves when there is some humidity present so the leaves are flexible. Lay the leaves out, one at a time, alternating stem to tip for 7 leaves thick. Roll the leaves together tightly, like a big cigar. If desired, twist each end in opposite directions to make the traditional "plug" of tobacco. Shave off a little at a time from the end for each use.

MSRP:
Now: $3.55
Was:
Hopi Blue Corn - Add Some Color to Your Flour An ancient flint corn that is a traditional staple of the Hopi people in Northern Arizona. Plants are 5' tall and bushy with beautiful smooth...

MSRP:
Now: $3.60
Was:
Navajo/Hopi Tea (Greenthread Tea) Greenthread is a beautiful, hardy native herb that thrives in harsh conditions while sharing its gifts generously. It is a short-lived perennial often grown as an...

MSRP:
Now: $3.60
Was:
Navajo/Hopi Tea (Greenthread Tea) Greenthread is a beautiful, hardy native herb that thrives in harsh conditions while sharing its gifts generously. It is a short-lived perennial often grown as an...

MSRP:
Now: $3.25
Was:
King Umberto Tomato - The Royal Ancestor to San Marzano King Umberto is an ancient Italian tomato variety, gaining its name as a tribute to the first visit of Umberto I di Savoia, the King of...

MSRP:
Now: $3.55
Was:
Hopi Blue Corn - Add Some Color to Your Flour An ancient flint corn that is a traditional staple of the Hopi people in Northern Arizona. Plants are 5' tall and bushy with beautiful smooth...