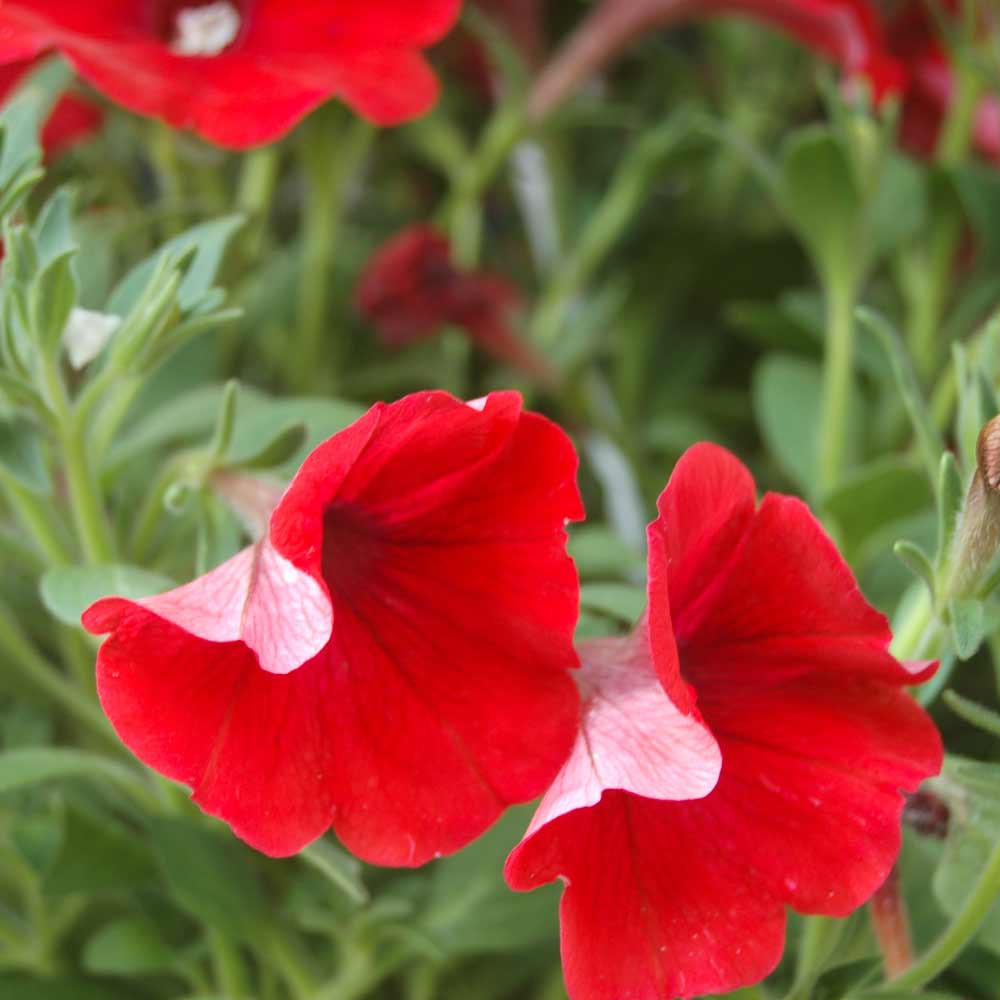 Fire Chief is the first true red petunia to be introduced and of the 45 pre-1960 All-American Selections award-winning petunias, the only one still surviving. Developed by S. Sinclair, a Bodger Seeds plant breeder, over a ten year period with line-bred cultivars Salmon Supreme and Cheerful as ancestors, Fire Chief was an All-America Selections Gold Medal Winner in 1950. It’s continued popularity today speaks volumes of its value in the garden.

A very specialized petunia variety with large trumpet-shaped vibrant red blossoms, not the pink or off-purple that passes for red in other petunias. It is just simply fire engine red, bright enough to knock your eye out in the flower bed. Blossoms are noticeably more fragrant than those of other petunias, opening with a rich red and fading to a soft rose-red shade.

Plants have a bushy clumping habit giving it a more elegant appearance, although you will barely be able to see the foliage due to the huge number of flowers that will be covering it! Those blossoms attract a record number of bees, butterflies, and hummingbirds searching for nectar.

Blooms from summer into fall when planted in full sun, well-drained soil, and consistent moisture. Tolerant of heat and drought, making them great for containers, pots, and hanging baskets.

Petunias became popular after a severe summer drought in 1944 killed record numbers of bedding plants throughout the United States. Their drought tolerance became national news, establishing their widespread popularity. Subsequent breeding focused on the hybridization and improved color and performance, often at the expense of their memorable scent.

The familiar garden petunia is almost a tobacco, as part of the Solanaceae family, it is closely related to the Nicotiana species, cape gooseberry, tomato, potato, and chili pepper.

In the early 16th century Spanish explorers in South America discovered a low growing, trail forming, white-flowered scented Axillaris, which in the Tupi-Guarani language was called Petun. It wasn’t until 1823 that French explorers bring back petunias to Spain when it became accepted and grown widely.

Beds, borders, walkways, garden paths, and containers are all perfect environments for the petunia. Planting older cultivars give both color and scent, which also attracts hummingbirds, butterflies, and bees.

In milder southern climates, petunias are a popular winter flower, valued for their long flowering period and bright colors.

MSRP:
Now: $3.35
Was:
Dwarf Sunspot Sunflower - Snow White Would Be So Happy! These dwarf sunflowers only grow 2-3 feet tall, and is one of the easiest flowers to grow in any garden. Makes a huge statement and catches...

MSRP:
Now: $3.35
Was:
Dwarf Sugar Pea - Colorful Blossoms One of the earliest, dwarf edible sugar pod peas around. Popular for the colorful blossoms, shoots and leaves as well as its prolific crop of curved small...

MSRP:
Now: $9.70
Was:
Widger Stainless Steel Seedling Tool - Superbly Handy The Widger is a perfectly elegant yet invaluable little stainless steel tool for planting seeds as well as pricking out and transplanting...

MSRP:
Now: $3.70
Was:
Szechuan Buttons – Effervescent, Champagne-like Zing These bright yellow and red gumdrop-shaped flowers do what no other herb can – take you on a journey of your senses and stop you in...