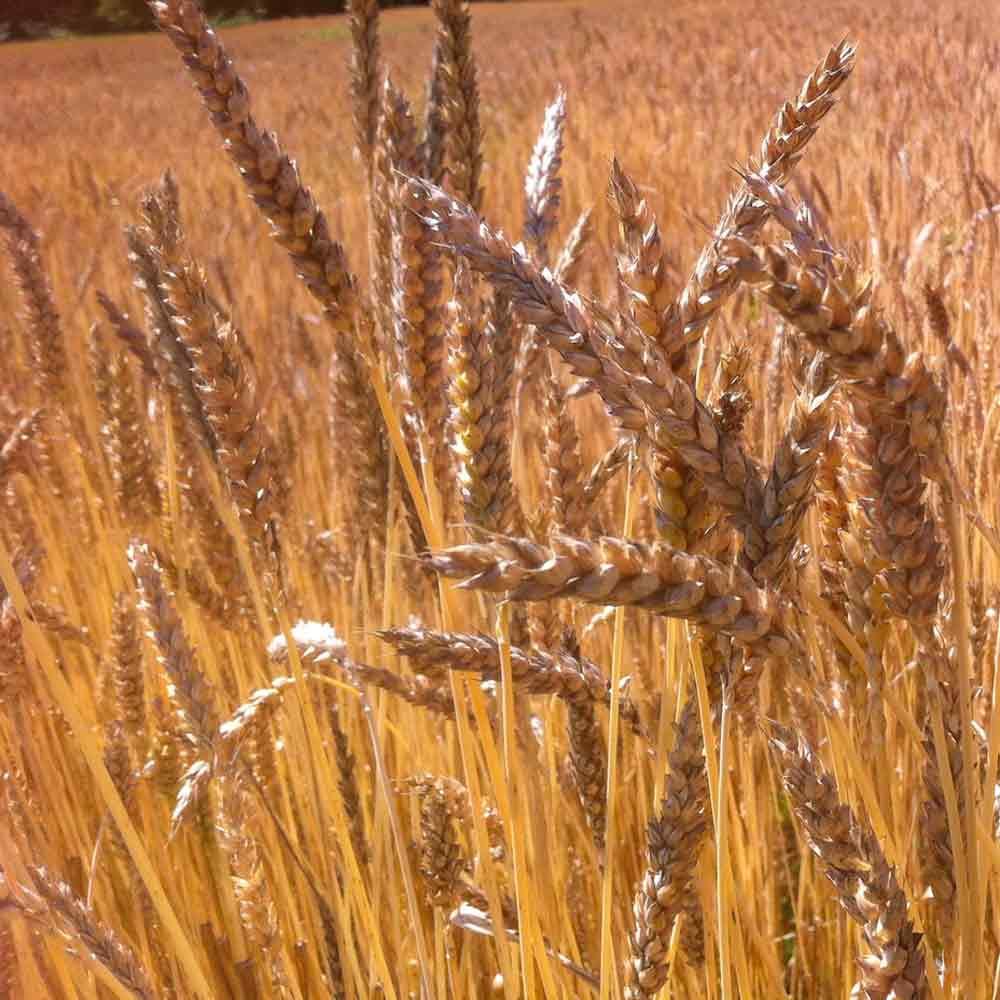 Red Fife Wheat - One of the Best Bread Flours

Red Fife wheat is Canada's oldest and most cherished wheat, dating back to 1842. Its intriguing origin story involves a Scottish farmer in Canada, a friend visiting the port of Glasgow, Scotland, and a barge of wheat from either Gdansk, Poland, or a port on the Black Sea, and hinges on three heads of wheat that escaped being eaten by the family oxen.

Red Fife was the most widely grown, distributed, and loved wheat across Canada, renowned as the best for milling and baking for over 60 years. It set the Canadian wheat standard until the early 1900s when Marquis - its offspring - replaced it as the number one wheat variety.

Even though Red Fife was gradually replaced, most of today's Canadian bread wheat varieties trace their genetic lineage back to the originator - Red Fife wheat.

Red Fife flour is being "rediscovered" and gaining popularity once again thanks to its wonderful flavor - described as a sweet, robust nutty flavor and lower gliadin levels that affect gluten-sensitive people.

Red Fife seed is a heritage grain that can be planted as either spring wheat or winter wheat, depending on your climate. Plant as winter wheat in areas with cold, freezing winters and as spring wheat where winters are milder with few freezes.

It grows to about 3-5’ tall and is a perfect grain for the home gardener, with a 10x20’ block of wheat needing about 1/2 lb of seed to plant, but yields up to 50-75 lbs of threshed wheat after harvesting.

Red Fife grows well in larger raised beds, and some enterprising gardeners have grown wheat quite successfully in plastic kiddie pools with holes punched in the bottom for drainage.

A good, healthy stand of heirloom wheat will almost always out-compete most weeds.

Interior decorators, restaurants, breweries, and home gardeners have all rediscovered the almost magical attraction that a sheaf of wheat on display brings, whether braided or not.

Early Canadian settlers tried to grow wheat beginning in 1812 with repeated failures due to grasshopper predation or destructive weather. No matter which variety was planted, none was suited to the harsh climate coupled with plant diseases, storms, floods, and rapid temperature changes, compounded by unskilled settlers who were not farmers.

The history of how, exactly, it came to be on David Fife's farm has taken on aspects of myth and legend, with several accounts explaining its arrival and discovery.

What is known for certain is that David Fife migrated to Canada from the small village of Kincardine on the north shore of the Firth of Forth, in Fife just northwest of Edinburgh, Scotland, and settled about 7 miles east of Petersborough in Otonabee, Ontario. The area was first settled in 1816, so much of it was farming land that was owned by the Crown.

When David arrived, local farmers were trying to grow Siberian wheat - introduced to Canada in the hopes that it would survive the severe winters. It did not grow well, yields were low and it was extremely susceptible to the fungal disease rust.

David then wrote to a friend in Glasgow - a major shipping port - asking for samples of good seed wheat. Exactly how the wheat seed was procured is where myth and legend intermingle.

Wheat is not grown in or around Glasgow - however, barges full of different wheat varieties from all across eastern Europe were often in the port of Glasgow, being offloaded or cross-shipped elsewhere.

The wheat sample procured for Mr. Fife that became Red Fife was more than likely from Galicia, or Halychyna in western Ukraine, and could have been shipped out of the port of Gdansk in Poland, or from the port of Odesa on the Black Sea, as Galician wheat was known to be shipped from both ports to western Europe. Ukrainian wheat was well-known and highly regarded, having been exported to western Europe and the Middle East for at least a couple of centuries by this time.

The wheat sample arrived in time for spring planting, but David didn't know whether it was a spring or winter wheat. He sowed part of the sample, but only five heads matured, showing that it was winter wheat.

Mrs. Fife discovered an ox eating two of the heads and rescued the remaining three healthy, disease-free heads. David saved the seeds from the three heads and replanted them that fall, even though the conditions were decidedly unfavorable, being quite late and in a shady location.

That single planting proved to be the foundation of Red Fife, as it was the only wheat in the area free from rust.

Red Fife was shared with other farmers and quietly became the wheat of choice for farmers, millers, and bakers until a Wisconsin farmer harvested a bumper crop of Red Fife in 1860 and wrote to a popular farming magazine describing his experiences. From then through the early 1900s Red Fife was the king of wheat in both Canada and the United States.

After about 1915, Red Fife began to slowly decline until around the 1950s it was only grown on a localized scale by those who preferred its flavors over the newer hybrid wheat varieties. From then until 1988 Red Fife was mostly maintained in plant breeder's seed collections. In 1988, Sharon Rempel, chief interpreter of The Grist Mill historic site at Keremeos, BC started planting the original varieties of wheat that were milled there. Seven historic varieties, including Red Fife, were planted and evaluated, becoming a living museum of wheat.

From there, bakers, brewers, farmers, and consumers became interested in the long-lost flavors, nutrition, and textures of this historical wheat. Now, leading chefs and bakers across Canada and the US are welcoming Red Fife into their kitchens, bakeries, and breweries.

When chef Jamie Kennedy organized an organic dinner for Prince Charles at Toronto's Brickworks in 2012, he asked Ontario farmer Patricia Hastings to attend and contribute her Red Fife flour. Prince Charles was so taken with the heritage wheat with a Scottish connection that he took several bags home.

Baking still remains the largest use of Red Fife wheat flour, with brewing in both beer and distilled spirits gaining interest as the uniquely warm, rich flavor wins new fans.

Wheat needs full sun, so plan your garden area accordingly. Planting wheat in a block is often the best use of a space, such as a 5x10' or 10x10' area will yield a surprising amount of wheat compared to what was planted.

Plant Red Fife as spring wheat if you have mild winters with few freezing periods. Areas with cold, freezing winters can plant either in spring or in the fall – up to a month before your first expected frost date to vernalize the young wheat plants to get an initial growth that will do dormant over the winter and begin growing again in the spring.

Plant spring wheat early in the spring – as soon as the soil reaches about 40°F but after the surface of the soil has dried out. An old saying from the Kansas wheat belt is, “Plant into the mud, and you’ll get a dud. Plant into dust and your grain bins will bust.”

Moderately fertile soil gives the best balance between flavor and yield, as rich soil has better yields with a noticeable lack of flavor. Rich soil also contributes to lodging, or the stalks falling over in windy conditions.

Heirloom wheat is deep-rooted, easily reaching over 3-5' down into the soil for moisture and nutrients. Loose surface soil is best for sowing, broadcasting is best as wheat isn't a row crop. Hand scattering can work, but you may not have a uniform stand. An inexpensive hand-cranked seed spreader works well.

Some gardeners plant strips of wheat 3' wide - this makes it easier for any weeding and harvesting later on. Raised beds and kiddie pools with drain holes work surprisingly well, considering the root system on heirloom wheat. Use your imagination to discover how you can grow wheat in your garden!

Once about 85% of the heads have turned golden, stop watering. Monitor the seed heads for dryness and harvest when most of them are dry and firm to the touch.

After harvesting, let the heads completely dry before threshing and storing. One easy way to harvest for the home gardener is to tie a sheaf of heads together, then cut the stalks below the tie with garden shears or heavy-duty scissors. The drier the wheat, the easier threshing will be. You can store the harvested stalks for months before threshing if needed, just keep them in a dry area where rodents can't get to.

Threshing is simple to do and using methods from the Bible still work today - lay the stalks out on a sheet on the floor and walk over them with hard-soled shoes, or pile the stalks a couple of inches deep and hit the heads with a stick. Rubbing a block of wood over a heavy framed screen is also very effective.

Collect the seeds, and remove the dust and chaff by slowly pouring from one bucket into another with a fan or slight breeze blowing the chaff away. You may need to do this a few times.

After the grain is threshed and clean, it is ready to store. Make sure to test a grain or two to make sure it is completely dry before storing, otherwise, you may have moldy grain. Take a single berry and bite it in two. If there is any hint of softness, let it dry further and test again before storing.

MSRP:
Now: $6.00 - $16.80
Was:
White Sonora Wheat White Sonora is a soft, round-grained winter or spring wheat with pale red grains that grow on beardless heads. An early spring variety that does equally well as a winter wheat...

MSRP:
Now: $6.00 - $16.80
Was:
White Sonora Wheat White Sonora is a soft, round-grained winter or spring wheat with pale red grains that grow on beardless heads. An early spring variety that does equally well as a winter wheat...

MSRP:
Now: $33.55
Was:
Ultimate Grain Seed Collection The Ultimate Grains Collection is the easiest growing, tried and true grains to get started with. They are ideally suited for the home gardener as they need no...