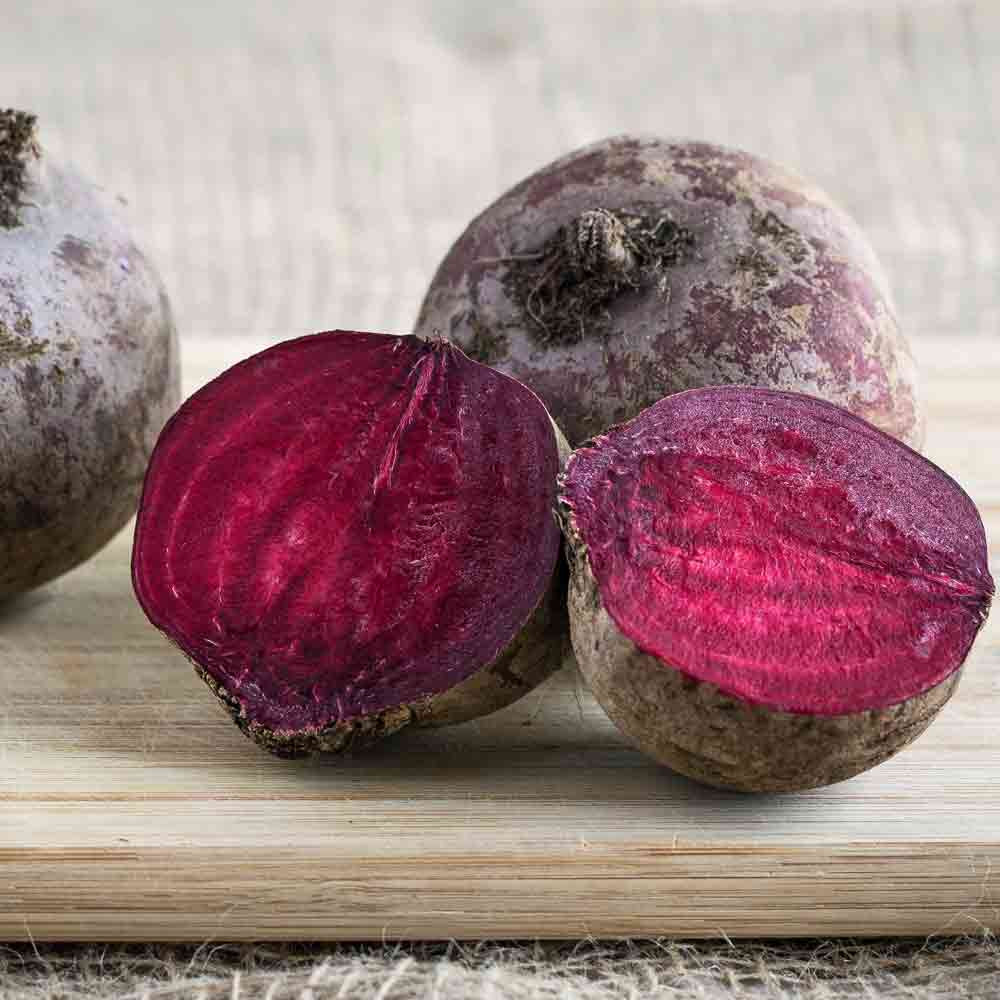 Bull’s Blood is often the winner of taste tests in both beet greens and the roots, with a flavor most often described as sweet and nutty with never a hint of a sharp or bitter aftertaste.

Even though it is considered to be a cool-season vegetable, its quality lasts all summer, and the color deepens as it grows, especially in cool conditions in fall or mild winters.

Bull’s Blood is as eye-catchingly ornamental as it is tasty. The deliciously sweet leaves are perfect for salads or can be used as baby greens at about 35 days. The leaves are broader than most beet varieties and have a particularly sweet taste when harvested young.

This gorgeous beet is a perennial favorite among beet lovers because it provides a consistently rich and sweet flavor from year to year.

Selected and refined by Dutch seedsman Kees Sahin from a selection of the ancient cylindrical French beet ‘Crapaudine’ for its deep, rich flavor, it was introduced in 1986 and was immediately a new favorite of American gardeners.

In Sweden, Bull’s Blood beets are the only variety that can be legally used to make red food coloring.

Beets are an ancient food for humans, most likely domesticated somewhere along the Mediterranean, possibly coastal Europe, in the second millennium BC. Today the wild beet, Beta vulgaris maritima is a common seaside plant in southern and western Europe. It arrived in Babylonia through trade in the 8th century BC and as far east as China by 850 AD.

The writings of Aristotle and Theophrastus suggest the beet was grown primarily for its beet greens, or leafy tops, for most of its history, though beet greens lost much of their popularity following the introduction of spinach around 850 AD.

The Romans liked both beet greens and the roots. To the Romans, beets were a food staple, and they introduced a white beet variety into Northern Europe, which the Celts grew. The first mention of a red beet was in the 13th century in northern Italy, and it wasn’t until the 17th century that the red beet became the main type in Europe.

Young, tender Bull’s Blood beets are hearty and delicious whether they are grated raw in salads, steamed and chilled, or roasted. Beet tops, or greens, are perfect additions to salads.

For a special taste treat, roast whole beets on a covered BBQ grill over medium heat until fork-tender. This smokes and cooks them slowly, deepening their flavors and caramelizing the sugars. Once chilled, serve them thinly sliced on a cracker with crumbled goat cheese and a drop of raspberry vinaigrette. Truly delicious and memorable!

They are also delicious when pickled, offering an incredible flavor profile while also extending the beets’ shelf-life. One of our clearest memories of pickled beets was a Polish beet recipe that was slow-smoked for a full 24 hours, then pickled in crocks and buried in the ground for 6 months. They were served cold, and each flavor slowly unfolded on the tongue and in the mouth, building on each other.

Direct-sow Beet seeds as soon as the soil can be worked in the spring when the soil has warmed to about 50°F and through the summer for successive crops.

While the beets are growing you can pick up to a third of the leaves and use them fresh or cooked. When the roots are 2-3” in diameter, start harvesting them. Pull or dig them up, and cut off the stems to prevent dehydration from starting.

MSRP:
Now: $3.30
Was:
Golden Detroit Beet Beautiful golden-orange roots that won’t bleed when sliced or cooked. Has good yields and is sweetest when young, does not become fibrous when larger. Looks almost like an...

MSRP:
Now: $3.30
Was:
Ruby Queen Beet Fine quality, early beet with a smooth, buttery texture and an outstanding flavor. Globe shaped with a smooth skin and even dark red coloring throughout. Grows well even in...

MSRP:
Now: $3.30
Was:
Rainbow Beet Mix  A stunning mixture of colors; red, white, yellow and striped this rainbow mix will surprise you with each beet harvested. They are a delicious addition to salads or make a...

MSRP:
Now: $3.30
Was:
Golden Detroit Beet Beautiful golden-orange roots that won’t bleed when sliced or cooked. Has good yields and is sweetest when young, does not become fibrous when larger. Looks almost like an...

MSRP:
Now: $3.30
Was:
Ruby Queen Beet Fine quality, early beet with a smooth, buttery texture and an outstanding flavor. Globe shaped with a smooth skin and even dark red coloring throughout. Grows well even in...