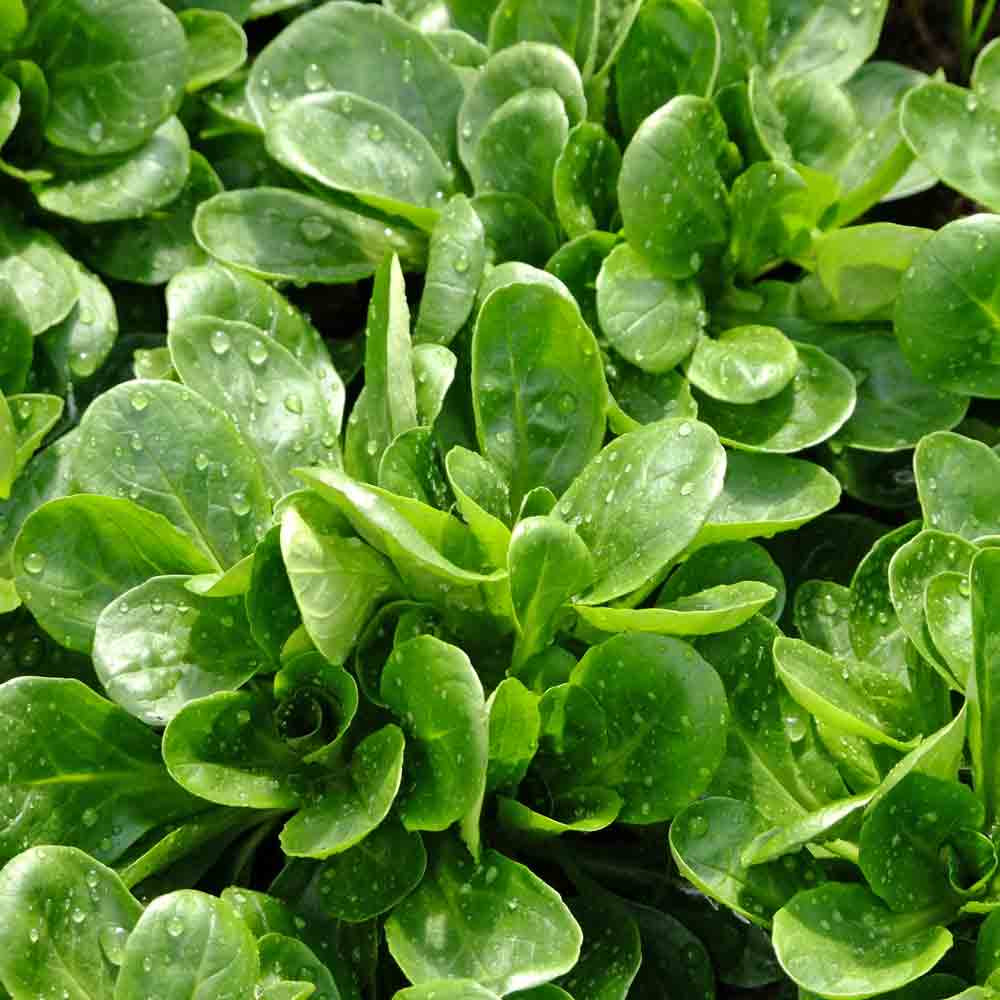 Corn Salad is an ancient green that grows wild in Europe and was foraged by peasants for centuries as a dependable source of essential fresh greens from fall to early winter and again in early spring. Stands of low-growing dark green rosettes with their spoon-shaped leaves growing alongside a harvested field or roadside were a welcome sight.

The corn salad plant is quick-growing, perfect for cut-and-come-again harvesting for a continual supply of leaves in cool weather or can be cut whole once the head has filled in.

The young leaves are delicate and tender, like butterhead lettuce, but a bit more herbal, while mature leaves are used much like spinach.

Today it is a traditional gourmet winter salad green in France, Italy, and Germany, mixed into salad greens as its characteristic nutty flavor and attractive dark green color complements other leafy greens.

As with other ancient plants that have traveled through different cultures, corn salad is known by several names - mâche or mache, common cornsalad, Dutch corn salad, lamb's lettuce, nut lettuce, or field salad. The common name "corn salad" refers to the European use of "corn" as a cereal, not the US term meaning maize.

Corn salad still grows wild across central and southern Europe, northern Africa, and western Asia. It is often seen as a common weed, as it grows abundantly in harvested fields and disturbed soils. It has escaped cultivation in North America and become naturalized on both the eastern and western seaboard.

Corn salad is grown as a specialty crop around Nantes, France - the primary producer in Europe.

The dark green rosettes nestle close to the soil. The plant has a delicate white stem, with layers made of 6 - 8 rounded, spoon-shaped, dark green leaves branching out in a loose head. Mature leaves can reach 4" long. Although technically hardy in Zones 5 to 8 where it can over-winter, it is almost always grown as an annual in all zones.

Corn salad was a staple food crop for thousands of years, as seeds have been found in excavations of Neolithic and Bronze Age lake dwellings on Lake Constance, Lake Zurich, and other Alpine lakes.

Botanically, it seems to have originated in the Mediterranean region and the Caucasus and was brought into Europe by Neolithic farmers crossing the Alps.

For centuries, European peasants depended on foraging for wild greens like dandelion, sour dock, or watercress. Jean-Baptiste de La Quintinie, the royal gardener of King Louis XIV, introduced corn salad to kitchen gardening in France towards the end of the 17th century, where it soon spread to other countries.

In Britain, corn salad first appears in English herbalist John Gerard's 1,484-page illustrated Herball, or Generall Historie of Plantes of 1597, although it was also eaten for centuries prior to being published. Gerard was astonished at seeing foreigners - Dutch and French living temporarily in England - sow "lambs lettuce" in their gardens and harvest it during the time of fasting.

To him, it was just one of countless field weeds growing wild in fallow fields, between stubbles in grain fields, and especially in vineyards or grape orchards. It was even called "vineyard lettuce" in many regions and was gathered by the basketful.

French settlers brought the plant to North America in the early 1800s. Thomas Jefferson was growing corn salad at Monticello and recorded saving seed in 1794. Its mildly nutty tasting leaves were especially valued as a winter lettuce when other lettuces are rare. While serving as President, he noted that "corn sallad" was available in Washington markets from March 4 to April 30.

The preeminent French seed house Vilmorin-Andrieux mentions six different "varieties" in their 620-page book The Vegetable Garden, first published in 1885 and widely considered to be the bible of vegetables.

Corn salad is excellent used as a tender young green, similar to chicory or arugula, as a highlight in salads. Its mild and a bit nutty taste and juicy texture make it a great counterpoint for other leafy greens. Corn salad is delicious in a mixed salad with a splash of olive oil and a little balsamic vinegar.

In Sicily and Sardinia, mache is made into pesto that is used as a condiment.

Direct sow mâche in early spring for colder climates or in the fall for warmer climates. Soil temperature should be between 50°F - 70°F for the best germination, but no higher than 70°F as the seeds start to go dormant. Patience is necessary, as mâche can be slow to germinate.

Sow by broadcasting the corn salad seed and lightly covering them with 1/8" to 1/4" of soil. Keep soil consistently moist until germination, which usually takes 7 - 12 days. Full sun is needed for the best germination.

Keep fall-planted mâche growing under cover of a row cover or hoop house in colder climates. It will tolerate temperatures down to about 5°F with protection.

Corn salad can be harvested as a "cut-and-come-again" lettuce. Use the outer leaves first, when they are about 3" long. Leave the rosette in place to allow more leaves to follow. You can also slice off an entire head, but it is unlikely to regrow.

MSRP:
Now: $19.80
Was:
Gourmet Lettuce Seeds Starter Pack For those who don’t know where to start with heirloom lettuces, or those who want to explore more and need some guidance. Our hand-selected starter pack includes...

MSRP:
Now: $23.90
Was:
Salad Bar Seed Collection - Grow The Best Salad You'll Ever Have A good mixed salad is appealing to both the eyes and taste buds, satisfying your appetite with great nutrition. Great salads have a...