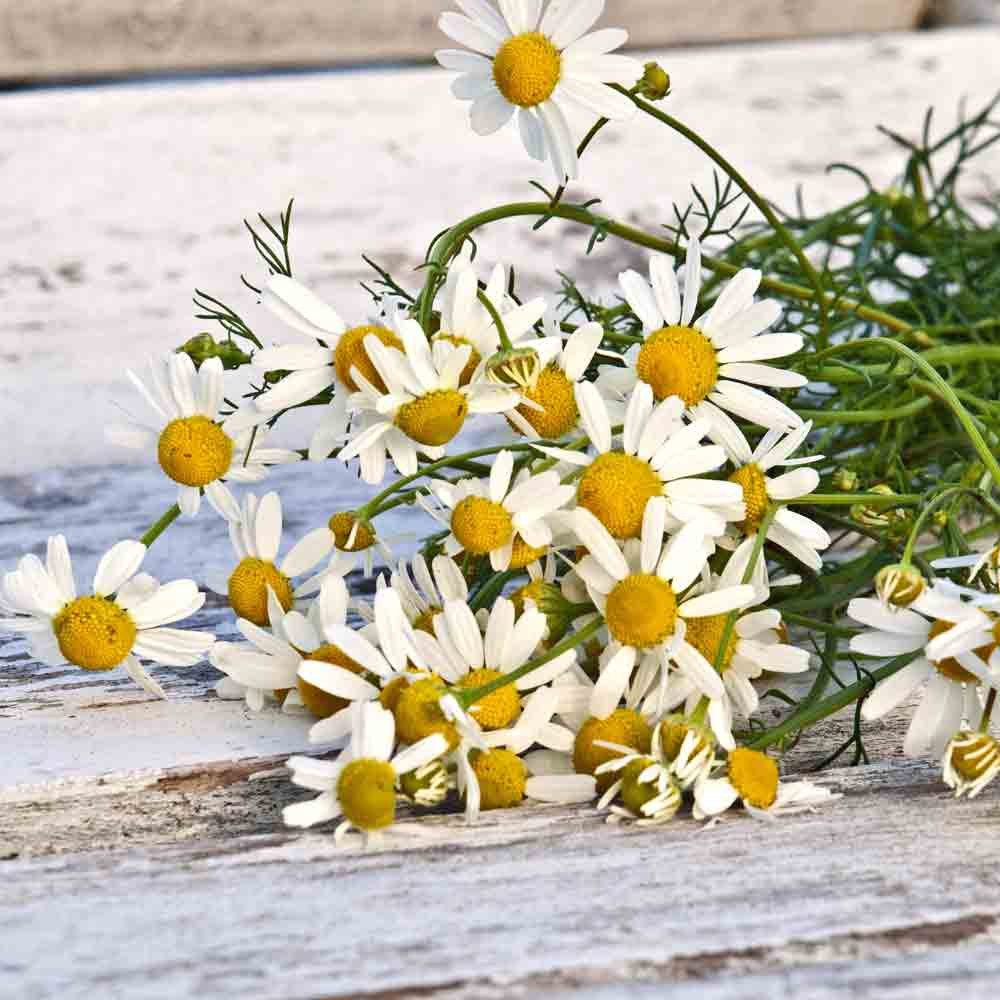 The tiny daisy-like flowers have a strong, aromatic apple scent and bloom early to mid-summer. They have collars of white drooping petals circling raised, cone-shaped, hollow yellow centers and are less than an inch wide, growing on long, thin, light green stems up to 3’ tall. The essential oil derived from the yellow and white flowers of this plant is blue due to very high levels of chamazulene, an anti-inflammatory and anti-histamine natural compound.

The foliage is finely delicate and fern-like with stems that branch out, with each stem bearing flowers and foliage. Native to Europe and Asia, and is grown for commercial use in Hungary, Egypt, France, and Eastern Europe.

It is traditionally used to calm and support the nervous system and as an aid in good digestion. All parts of the plant are edible and tasty in salads, especially when young.

The use of chamomile dates back thousands of years to the ancient Egyptians, Romans, and Greeks. It is native to Europe, north Africa, and some parts of Asia.

Roman chamomile is best used for calming as a sedative, for muscle spasms or tight muscles, or digestion, as it is rich in esters researched as being calming to the central nervous system and relaxing to muscles.

The two chamomile plants are in the same family and have similar flowers and leaves but are used in very different ways. Both are used medicinally, are listed as safe herbs, are naturally antiseptic, insect repellents, and are anti-spasmodic, anti-inflammatory, anti-fungal, and anti-bacterial.

Beneficial insects and friendly pollinators are attracted to chamomile while helping to rid your garden of pests and improve pollination. Poor soil is no problem for chamomile, so plant it generously in, around, and near your garden.

MSRP:
Now: $3.30
Was:
Roman Chamomile Roman chamomile is most known as a low growing perennial groundcover, preferring part shade to a height of around 12”, spreading by rooting stems. The tiny, sour-apple scented...

MSRP:
Now: $33.35
Was:
Feed the Bees Seed Collection – A Pollinator Paradise in Your Garden “Bees do have a smell, you know, and if they don’t they should, for their feet are dusted with the spices from...

MSRP:
Now: $3.30
Was:
Roman Chamomile Roman chamomile is most known as a low growing perennial groundcover, preferring part shade to a height of around 12”, spreading by rooting stems. The tiny, sour-apple scented...

MSRP:
Now: $20.45
Was:
Time for Tea Seed Collection Growing an herbal tea garden can be one of the greatest gardening rewards, and can be just as therapeutic as drinking the tea. The tea garden is a sensory delight,...