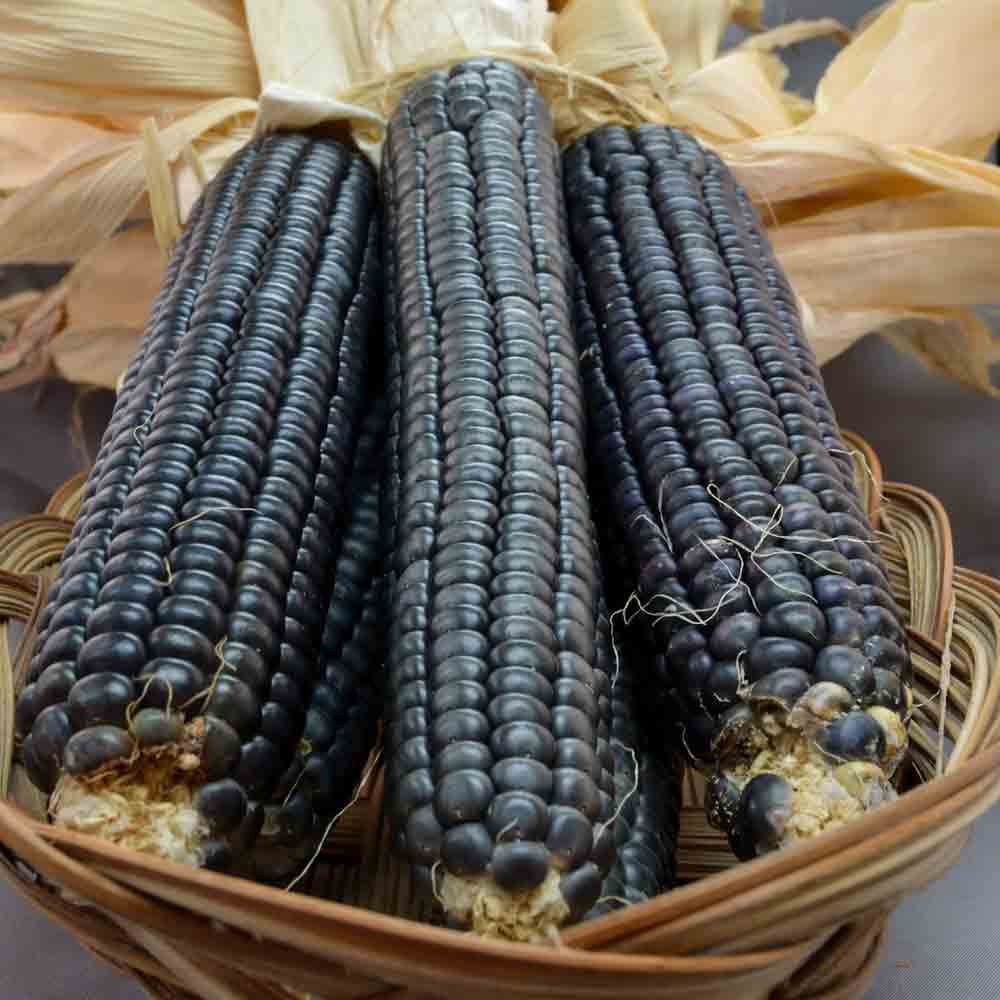 Hopi Blue Corn - History, Color, and Flavor for Your Garden

This ancient, heirloom corn is far more than simply a traditional food for the Hopi people in Northern Arizona, as all of Hopi family life revolves around the cycle of corn – starting with the planting ceremony each spring.

Hopi Blue Corn is a very robust, drought-tolerant cultivar selected over many generations that is well-adapted for harsh climates. Plants are short - growing 5’-6’ tall and bushy with side shoots at the base helps prevent falling over - known as lodging. Pollen and tassels are a striking reddish-purple color, with kernels first appearing ivory-colored until dry-down when they develop their stunning royal blue-black luster. Ears are a beautiful smooth silvery blue that are 8-10” long with usually 2 per stalk.

The stunning color is complemented by the exceptional flavor and texture once dried and ground. Extremely drought-tolerant thanks to its long, deep taproots, it has a higher protein content than any modern corn.

The Hopi people’s origin stories say that long ago Màasaw, the Guardian Spirit, offered the clans several gifts - wood for the Hopi planting stick, a bag of seed corn, a gourd of water, and a small ear of blue corn. At Màasaw’s direction, the clans began an extended migration. They learned on the way to cultivate corn and a better life, one that embraced unity, selflessness, cooperation, harmony with nature, and stewardship of the land.

Corn is thought to have been first domesticated about 9,000 years ago in the lowland tropics of Mexico. It arrived through trade and travel to what is now the Southwest United States about 4,000 years ago. After 2,000 years of continuous planting, close observation, and careful selection by indigenous farmers the corn has adapted and now thrives in the area’s harsh climate of high, dry elevations and short, unpredictable growing seasons. As a result, the Hopi people became masters of dry-land farming.

Corn is present at every stage of life for the Hopi - every ceremony, and every key moment in the cycle of the seasons. Corn is the first thing they are fed after birth, and cornmeal sends them off to the spiritual world when they pass on.

Can be eaten as sweet corn when picked young and roasted, but is best known for making an excellent, sweet blue corn flour that has 30% higher protein levels than dent corns. Traditional cornmeal porridge or corn bread from home-grown Hopi Blue is a transformational experience that is deeply satisfying. Also makes a great fall decoration with the stunning silvery blue-black ears.

Hopi clans are matrilineal, so women make many of the decisions for their community’s agriculture. Late in winter, Hopi women check their stocks of corn and decide what colors and amounts must be planted for the coming year.

The women prepare and bless the seeds before planting to encourage a good harvest.

Hopi farmers also grow beans, squash, melons, and some fruit trees. Those fields will sometimes be irrigated, but they never irrigate their cornfields, depending solely on winter snowfall and summer monsoon rains. Only the moisture stored in the soil is available from planting time until midsummer when the monsoon rains usually begin.

Hopi farmers plant corn in multiple fields in different locations up and down the washes or in side canyons. Planting at separate sites hedges their bets that at least one will produce a good crop.

Weeds are cleared off and a small patch of the sandy surface soil is scraped away before planting. The sand is replaced after planting, acting as a mulch, preventing moisture from evaporating too rapidly in the loamy soil below.

A flat-tipped digging stick is pushed into the ground, creating a hole about 12" deep, then 8 - 12 seeds are planted in each hole so the corn grows in mounds. Each mound is five to seven paces away from its neighbor to ensure that enough water is available for optimum growth.

The depth and spacing of each planting depend on that year’s soil moisture at planting time, the field’s location relative to rainwater runoff, and whether it is composed of clay or loam, among many other factors.

Most corn is planted in late May and early June.

Conventional corn is planted 2 - 4" deep and 6 - 8" apart. Hopi farmers plant deeper to catch moisture left from the winter’s melted snow, which lies deeper below the surface. It is this careful, continuous selection of the best strains of Hopi corn that has helped it adapt and thrive in a hot, dry climate for the past 2,000 years.

When a seed of Hopi corn germinates it sends out a single root downward, searching out the deep moisture, while also sending a shoot toward the surface. These adaptations, which are lacking in conventional varieties, helped Hopi corn thrive in a hot, dry environment for 2,000 years.

Fresh corn is ready at the young, milky stage by September where it is harvested and eaten fresh. Later in the fall the rest of the corn is harvested by the men who bring it home for the women to prepare for drying by stripping the husks off and stringing the ears through the stem before hanging them up to dry.

A few, perfect ears are saved for ceremonial use, while some of the best ears from the rest of the harvest are set aside for seed stock in future years.