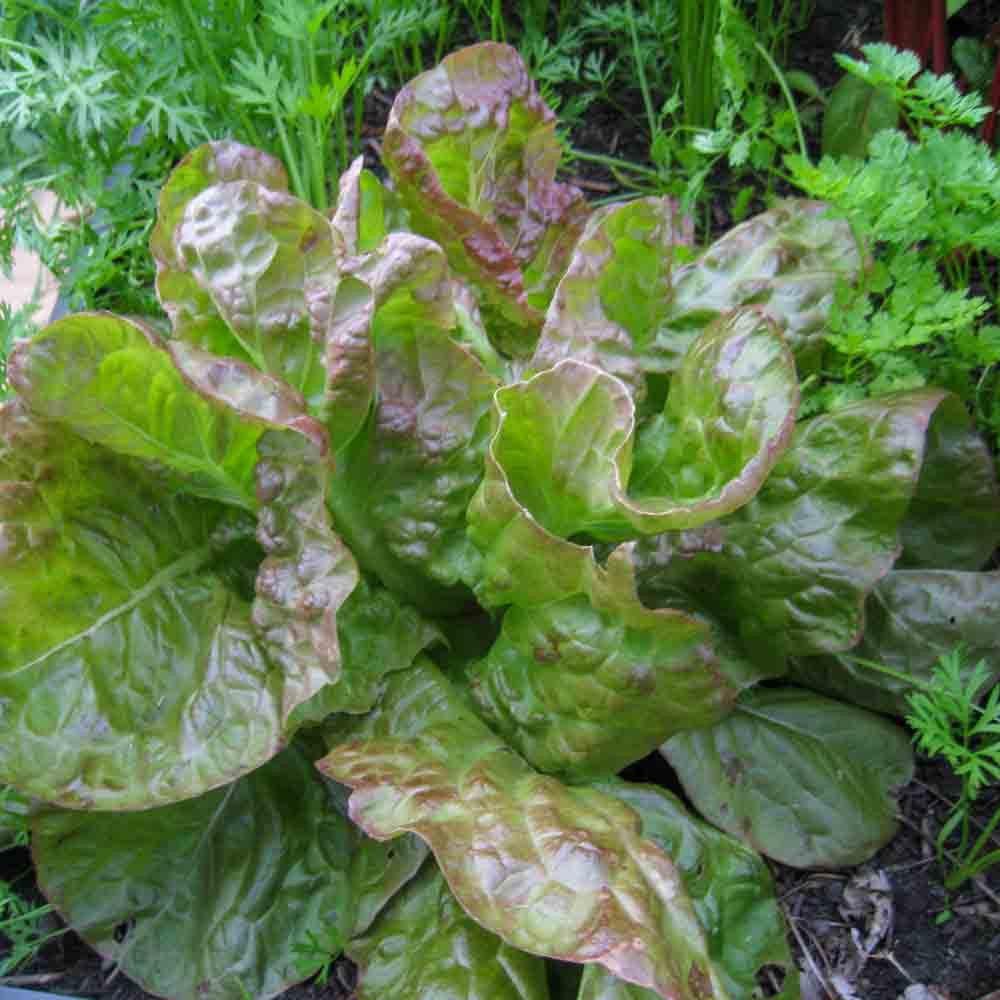 Monsieur Philippe Victoire de Vilmorin described Marvel of Four Seasons lettuce in his 1885 book "The Vegetable Garden"  - "This is the most highly coloured of all the Lettuces which are commonly grown about Paris, and is of a still deeper red than the old variety known as the Rouge Chartreuse. This variety may be grown almost all the year round, as one of its French names indicates, but it does best in spring and summer. The head forms very quickly and keeps firm for a long time, even in very hot weather."

The storied French company Vilmorin-Andrieux & Cie emerged in the mid-1700s from the collaboration of Philippe Victoire de Vilmorin—a grain and plant merchant and connoisseur—and his father-in-law, Pierre Andrieux, Botanist to the King. The Vilmorins, through the many Paris markets, contributed enormously to the botanical and agronomic knowledge of their time.

Their first catalog was published in 1766, showcasing seeds for kitchen garden vegetables. A series of Publications périodiques followed, notable for both the quality of botanical and horticultural information and the exquisite illustrations. By the mid-1800s, Vilmorin was one of the most highly respected seed companies in the world – thanks to advances in production, trade, and scientific study, thanks largely to Louis de Vilmorin's crucial research into selection and heredity in the 1850s.

It is also very cold hardy, traditionally planted 3-4 weeks before the last frost in the spring and succession planted every 3 weeks until late spring, stopping for the summer heat and re-commencing in the cool fall. Will bolt in the heat if not kept moist and shaded. It grows with some protection down to 20°F reliably.

First offered commercially around 1885, Marvel of Four Seasons likely originated in the 1820s and was prized for its ability to self-sow its own seed, producing a second crop in the late fall without succession planting.

All cultivated lettuces were originally grouped into two distinct categories, "Cabbage lettuces" which had rounded or flattened heads, and "Cos lettuces" with tall and elongated leaves and heads. These categories were further segmented into winter, spring, and summer lettuces.

The Butterhead designation was a refinement and expansion of the Cabbage category.

This butterhead variety grows 8" - 12" in diameter with tender, sweet, heavily crinkled leaves growing up to 8" tall. The leaves turn from light green at the base, through bronze to a striking cranberry-red at the tips, drawing eyes like a large flower in the vegetable garden.

Lettuce is thought to have originated in Asia Minor, probably from one of the wild lettuce types, of which there are more than 100 varieties. Lettuce graced the tables of Persian kings, Roman senators, and medieval lords. It has been food for peasant and noble alike for hundreds of years. Lettuce was also prized medicinally for its cooling powers and was used to tame fevers, liver inflammations and lust.

Fast-growing heading lettuces like Marvel of Four Seasons are ideal for filling in gaps in early-season gardens. Plant between widely spaced crops like eggplant, and you'll get an extra harvest of lettuce just as the eggplant begins to expand. Mulching your lettuce plants will help the shallow root system maintain even moisture. Try to keep constant moisture by watering the soil not the leaves.

Harvest lettuce early in the day - the closer to sunrise, the better it tastes and the longer it keeps. Lettuce is full of nutrients and moisture first thing in the morning, but by early afternoon has begun to wilt as water evaporates from the leaves.

MSRP:
Now: $3.30
Was:
Little Gem Lettuce - The Perfect Mini Head A refined Dark Boston type lettuce with 4-5" tightly wrapped heads with bright green leaves, a pale yellow heart that is sweet and crunchy with a superb...

MSRP:
Now: $3.30
Was:
Amish Deer Tongue Lettuce - Don't Let the Name Stop Your From Growing It! Amish Deer Tongue lettuce is named for the triangular shaped leaves with a thin midrib growing upwards in a rosette. It has...