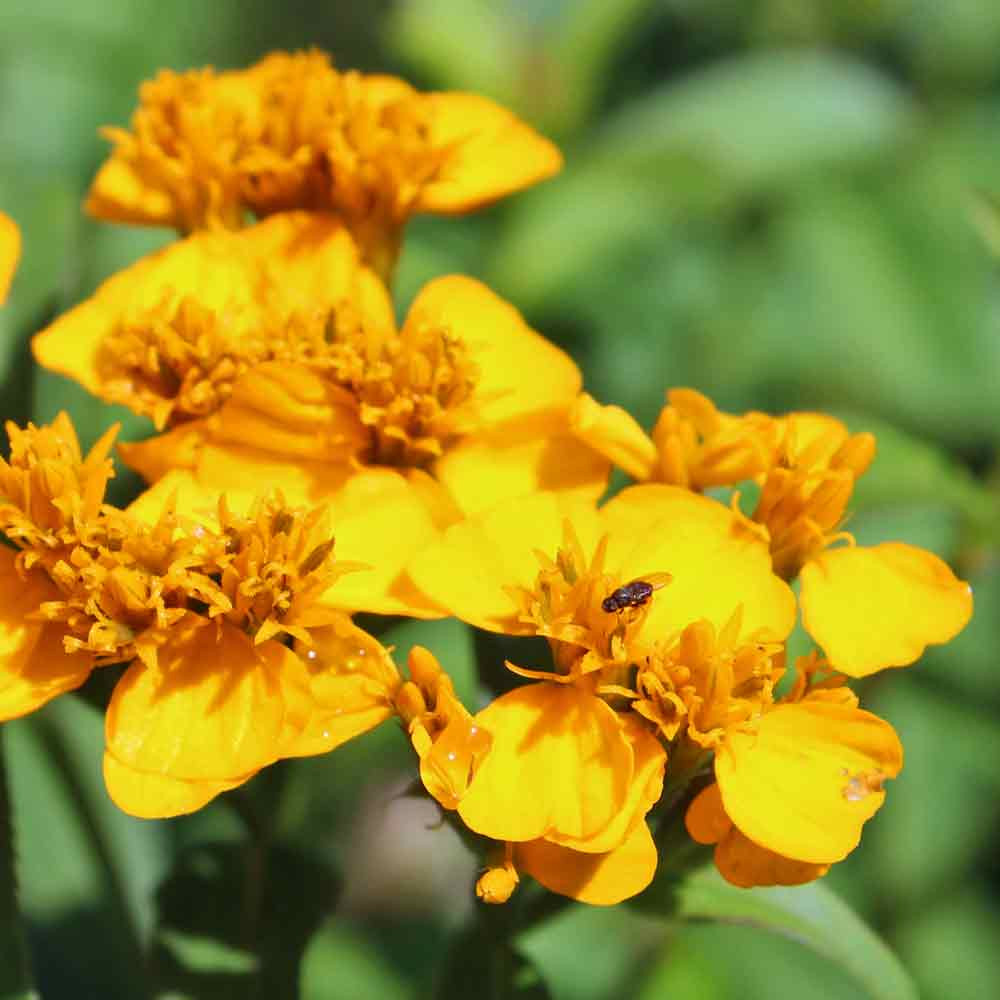 Often overlooked or misunderstood, Mexican marigold - otherwise known as Mexican tarragon, botanical name Tagetes lucida - is an undiscovered treasure for your garden, no matter whether it is vegetable, herb, or flower oriented.

Its sweet, anise-scented leaves and flowers are a gentle golden-yellow; blooming all summer and can be dried for a delicious tea. The leaves are a substitute for French tarragon and thrive in warm areas where tarragon can not grow.

Plant it and let it go to work attracting loads of beneficial insects and birds, all the while keeping destructive pests at bay, both above and below the soil.

This brightly cheerful plant thrives in hot, sunny areas where traditional tarragon withers. An evergreen shrub in USDA Zones 8-11, it is just as happy in cooler zones as an herbaceous perennial - dying back in the winter and regrowing next spring. It grows as an annual in cold winter areas, sprouting anew from last year's fallen seeds.

It grows 18 - 30" tall with a pronounced bushy habitat marked by a profusion of dark green leaves interspersed with striking orange-yellow bite-sized five-petal single anise-scented flowers that make a showy display from mid-summer through early fall.

Ethnobotanists believe marigolds originated in the area from south-central Mexico to Guatemala. Today they are nativized from the Southwestern US to Argentina, and through trade, grow worldwide.

The de la Cruz-Badiano Aztec Herbal of 1552 is the earliest European documentation of marigolds. Bernardino de Sahagun describes the tagetes species in his Florentine Codex, Book 1 during his discussion of Xochipilli, the Aztec god of inebriating plants, for whom one of the marigold species is named after.

Written between 1540 and 1585, the Florentine Codex (named for where the manuscript has been kept in the Laurentian Library collection since at least 1791) is considered the most authoritative documentation of the Aztec life and traditions.

Tagetes species have been cultivated and bred for many centuries in pre-Columbian Mexico, dating back to the Classic Mayan period (300 - 900AD).

Mexican marigolds have so many uses in its native Mexico and Guatemala that it is called pericón - literally, "the plant that does it all". It has been used in ceremonial, wedding, spiritual, medicinal, and culinary uses. Folk medicine prescribes it for everything from depression and anxiety to pain and fevers. Mayans used it to treat malaria and colds.

As if that isn't enough, it is a proven insect repellent, a rich golden-yellow dye, a healing tea ingredient, and incense.

Its culinary uses center on its sweet, anise-like flavor. Our beloved chocolate originated when Mayans used the flowers along with vanilla and chiles to flavor ground cacao beans for a drink called xocolatl, the hot spicy drink of Mayan gods and Aztec emperors.

Fresh-picked marigold flower petals add depth and flavor to chicken and fish dishes, along with soups and summer salads. Use it to season dressings and sauces. It mellows as it cooks, so add toward the end for more presence. In Mexico and Central America, it is still added to rice and bean dishes, as well as giving savory flavors to egg and meat dishes.

As a garden ornamental, grow along borders in full sun or partial shade to add pop to the transition areas. Plant along walkways, around patios, and outdoor living areas to get the most from it. Release its sweet scent by brushing across the leaves and flowers.

Mexican marigold thrives in containers on porches, decks, and patios where other flowers struggle.

Multiple species of bees, butterflies, and other pollinators visit the bright flowers. At the same time, the flowers help repel aphids, whiteflies, cabbage maggots, corn earworm, Mexican bean beetle, rabbits, and some species of destructive nematodes. Ladybugs are almost constantly seen on the leaves of Mexican marigolds. Asparagus beetles and bean weevils are also repelled by the Lucida species of marigold.

Mexican marigold is a nectar source for several species of butterflies and bumblebees, often part of butterfly garden plantings.

Other vegetables that benefit from companion planting of Mexican marigolds are basil, broad, runner, and bush beans, citrus, eggplant, peas, and tomatoes.

Flowers that benefit from being close to marigolds are roses, zinnia, sage, and mint

Mexican marigold dislikes cold soil, so plant once all danger of frost has passed and the soil does not feel cold to your hand first thing in the morning.

Direct sow the seeds onto the soil, pressing them gently into the soil for full contact. Keep the soil moist during germination, then reduce watering until the top inch of the soil is slightly dry.

Once it begins growing, it is hardy and resilient, not needing much attention or fertilization. The one thing it needs is full sun to slight shade - this is one plant that won't tolerate full shade.

Once flowers appear, harvest them every few days to promote repeat flowering and avoid going to seed. Once the first few flowers die back and start producing seed, the whole plant slows down significantly.

MSRP:
Now: $3.30
Was:
Pot Marigold A hardy annual with 2" single blossoms in cream, yellow, orange and shades in-between. An ancient Marigold, known today as Calendula, is very different from what are commonly...

MSRP:
Now: $3.30
Was:
Mexican Sunflower - The 'Torch' of the Garden Butterflies of all kinds, but especially the endangered Monarchs, carry a “Torch” for the Mexican sunflower. Swarms of migrating Monarchs are commonly...