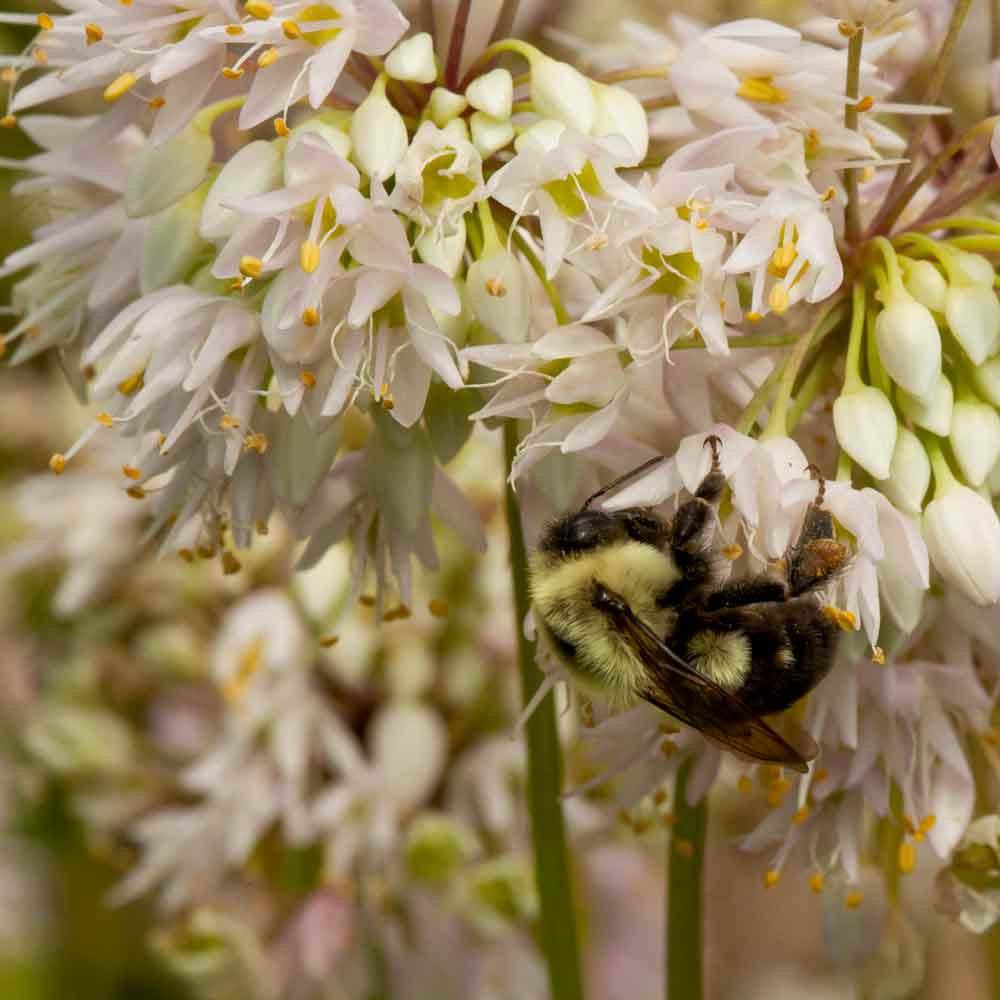 Nodding onion is one of the most dramatic flowers to grace home gardens and among the first to appear in early spring, though the true scope of its usefulness is often overlooked.

Native to North America, it is adapted in almost all states, is very easy to grow, and is quite drought-tolerant, often growing in prairies, dry woods, and rocky hillsides.

This valuable pollinator plant prefers well-drained soil in full sun but tolerates clay soils, thriving in difficult sites such as hot sun and gravely soil. It naturalizes easily, gracing native landscapes, wild gardens, and meadows with its effortless beauty but is also an eye-catching attraction in formal gardens. The abundant gently nodding bells floating above dense tufts of lime-green leaves are a great addition to rock gardens, borders, and cottage gardens.

It is perennial and hardy in zones 4-8.

Nodding onions grow 8-18" tall, starting with clumps of attractive narrow, grass-like leaves from which a single flowering stem emerges. The stem can have up to 30 individual drooping bell-shaped flowers that sway delicately in a breeze, showing how they earned the name of nodding onion. The flowers are light pink to lavender or occasionally white, depending on where they are growing. Butterflies, bees - both native and honeybees, and hummingbirds are attracted to the protruding stamens of the small flowers, which bloom from early to mid-summer. The grass-like foliage lasts into late summer before dying back, slowly expanding over several seasons and making new offsets.

The seed head that remains after the flowers fade is very decorative, later splitting open and releasing dull black seeds, each with a honeycomb pattern on the surface. Will self-seed, so remove dead flowers before they scatter their seed to reduce unwanted spread.

Nodding onion has been a historical staple food of Native Americans since long before European settlers arrived. Traditionally, the leaves, bulbs, and flower bulbils were eaten.

Archeological research at a pre-historic hunter-gather fisher site in the southern interior plateau of British Columbia, Canada discovered evidence of Allium cernuum bulbs that had been roasted in a hearth and steamed in pit ovens as a food source long before written records.

Once a common onion species, many Native American tribes foraged for the crisp bulbs from spring to early fall as an important and reliable food source. They were eaten raw, roasted, or added to stews, soups, and meat dishes much as common onions are today. Many settlers were introduced to the onion by Native tribes and came to love them as the Lewis and Clark expedition used it as a food source in Montana.

Onions have been cherished as medicine for almost as long as they've been used as food.

In 1711, Juan de Esteyneffer, a Jesuit brother who was assigned to the Order's College at Chihuahua to care for old or ailing missionaries wrote the Florilegio Medicinal. He combined his knowledge and experiences from his medical training in Europe with the observations in the missions in his writings.

This book compiled the herbal lore of various Native Americans missionized by the Jesuits, combined with the materia medica or medical knowledge of Europe, calling out cures to diseases that were recognized in the 18th century. Organized in three parts, the Florilegio provided systematic instruction on the diagnosis and treatment of diseases, surgical methods, and the composition of common medicines.

This book served as a standard reference for herbal therapy throughout the Greater Southwest. From headaches to coughs, earaches to ulcers, burns, wounds, and asthma, onions were frequently used as an ingredient for curing many common ailments.

All parts of this native plant are edible raw or cooked and can be eaten and prepared just like a traditional bunching or green onion. The flavor tends to be stronger than supermarket varieties, but cooking mellows and sweetens the taste. Bulbs and lower stalks are delicious in stir-fries; green leaves can be finely chopped and added to salads; flowers attract attention as garnish.

It is best to harvest bulbs in the second year after they have begun to establish themselves.

Nodding onion is quite adaptable, preferring moderate sun, and slightly moist fertile soil but will grow in less favorable conditions.

Plant nodding onion seeds outdoors in the fall where they have space to spread. Scarify seeds before planting for the best germination. Offset bulblets, which form around the base of the larger bulbs, can be divided in fall once they've gone dormant.

Wait until the onion plant has multiplied before harvesting, typically after the first or second year. Choose the largest bulbs at the center of the clump, replanting smaller bulblets for more plants next year.

Cut the greens back and use them like chives once in the spring before the flower stalk appears. Afterward, pick leaves sparingly. Chop them fine to use as a salad counterpoint. A few flowers are a beautiful garnish and attract attention to almost any dish.

White Ebenezer Onion Bulbs White Ebenezer onions are always crisp and delicious – one of the most popular onions grown in home gardens. The bulbs are medium sized, ranging from a baseball to...

MSRP:
Now: $3.30
Was:
Rampion - Shakespeare’s Salad Greens Rampion – sometimes called ramps in Europe where they are native – is one of the earliest wild edibles to emerge in spring. It is a...