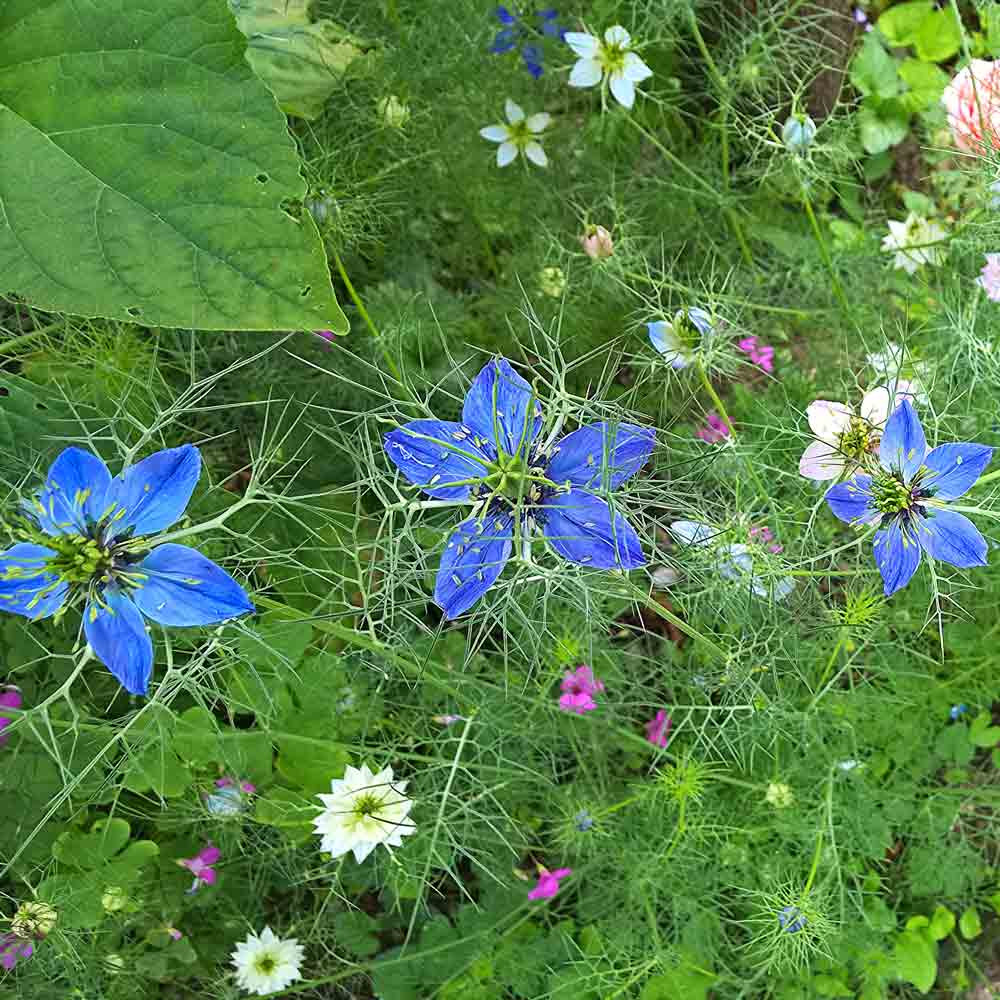 Easy growing, abundant cheery bright blue flowers were widely known and revered by the ancient world, but you’ll love their attractive sprays of fringed blossoms in shades ranging from Persian blue through periwinkle into pale white.

Valued by the ancient Egyptians, Greeks, and Romans; and discussed in the Bible, Koran, and in Ayurvedic traditions, the seeds are used as a spice for flavorings and medicinally for ailments from headaches to asthma. The flowers are highly ornamental and the dried seed pods are used in flower arrangements.

Most often grown in the US as an ornamental for its attractive flowers and closely related to Love-in-a-mist (Nigella damascena), nutmeg flower also attracts honeybees. Plants are hardy annuals growing from 8 – 24” tall supported by a well-developed taproot, allowing it to thrive in hot and arid climates with modest moisture. They tolerate a wide range of soils and will reseed themselves, establishing a community within a couple of seasons. The stems are branched with fine, deeply divided leaves topped by five-petaled flowers having numerous stamens. Seeds are hard, black and triangular or pyramidal shape.

Nutmeg flower prefers well-drained soil in full sun, and can often be found growing wild in rocky ground, fallow fields and scrubland. Because of its hardiness, it’s easy to grow and is often recommended for beginning gardeners, children, and low maintenance gardens.

Black cumin is believed to have originated in the Mediterranean region, but it is an ancient plant that has spread through trade throughout northern Africa, eastern Asia, and southern Europe.

Historical references are widespread and numerous – documented in some of the oldest religious and medical texts. Seeds and oil were found in the tomb of the Egyptian Pharaoh Tutankhamen, while the earliest written reference is thought to be in the 28th chapter of the Old Testament book of Isaiah, verses 25 – 27, where the reaping of black cumin and wheat is contrasted, indicating how it was treated differently by the farmers as more valuable than wheat and other crops. It is described as the ‘curative black cumin’.

Hippocrates wrote about nutmeg flowers benefits, as did the Greek physician Dioscorides and Pliny the Elder listed the treatments in his “Naturalis Historia”. Ancient Egyptians knew and used the oil externally to nourish the skin and as a digestive aid, treating it as a treasured part of daily life. In old Latin it is called as ‘Panacea’ meaning ‘cure all’ while in Arabic it is termed as ‘Habbah Sawda’, meaning ‘Seeds of blessing’. The Romans called it Greek Coriander.

Only the seeds are used. Nutmeg flower has earned many names from the different nations that have grown and used it, and those names give us an indication of its wide range of uses. One name is Four Spice, for its lemon-carrot scent and strawberry-pepper taste that lends an intriguing flavor to curries, bread, and cakes. Hippocrates and Dioscorides called it Melanthion – little black seed – and in the Bible it is specifically listed as the ‘curative black cumin’. In India it is known as Kalonji while in China it is referred as Hak Jung Chou. Other commonly known names include black caraway, Roman coriander, or fennel flower, while Moroccans call it sanouj – black seed. It combines well with lemon and cilantro in cooking. Make a tea by adding boiling water to lightly crushed seeds.

Moroccans use it today for colds and congestion, wrapping a spoonful of seeds in a small linen square and rubbing it between their hands to warm it up, then holding it under each nostril while pinching the other, repeating until they can breathe freely again. The ancient Greek physician Galen explains its use against catarrh – inflammation of the nose and throat – in exactly the same way it is used today, two thousand years later.

Seeds are sprinkled on yogurt and in salads to give the distinctive strawberry-pepper taste pop. India, the Middle East, and parts of north Africa roast and grind the seeds to season curries, rice, breads, and sweets.

Modern medicine has documented the benefits of black seed oil for many treatments ranging from headaches, nasal congestion, toothache, intestinal worms, asthma, diarrhea, and allergies. Containing over one hundred different medicinal chemical constituents, it is being studied for use in several different diseases.

Very attractive to smaller pollinators, especially honeybees and their relatives, so plant near vegetable and herb gardens.

Sow seeds on the surface of the soil, gently press them into the soil and keep it moist until they germinate. Seedlings have lacy foliage, making them easy to recognize from weeds.

The flowering time is only a few weeks, so succession plant seeds two or three times from late spring to early summer for a continual carpet of blooms.

Collect the seedpods as soon as they turn brown, storing in a paper bag until they are brittle. Open the seedpods and shake the little black seeds out.

MSRP:
Now: $3.30
Was:
Cumin - Spice of the Nile A member of the carrot family, cumin has a along history dating back to the Persians, Egyptians and Hebrews.  Details This small annual herb has slender, dark green...

MSRP:
Now: $3.30
Was:
Wasabi Arugula - Get Your Spiciness On! Japanese wasabi is a special root that only grows in very specific climates, but now you can have the wasabi flavor right in your garden with this specially...

MSRP:
Now: $3.65
Was:
Navajo/Hopi Tea (Greenthread Tea) Greenthread is a beautiful, hardy native herb that thrives in harsh conditions while sharing its gifts generously. It is a short-lived perennial often grown as an...

MSRP:
Now: $3.65
Was:
Dulce Buttons - A Little Bit of Sweet Known by the Aztec as Tzonpelic xihuitl, which literally means “sweet herb”. The tiny white buds are super sweet with a background flavor of...