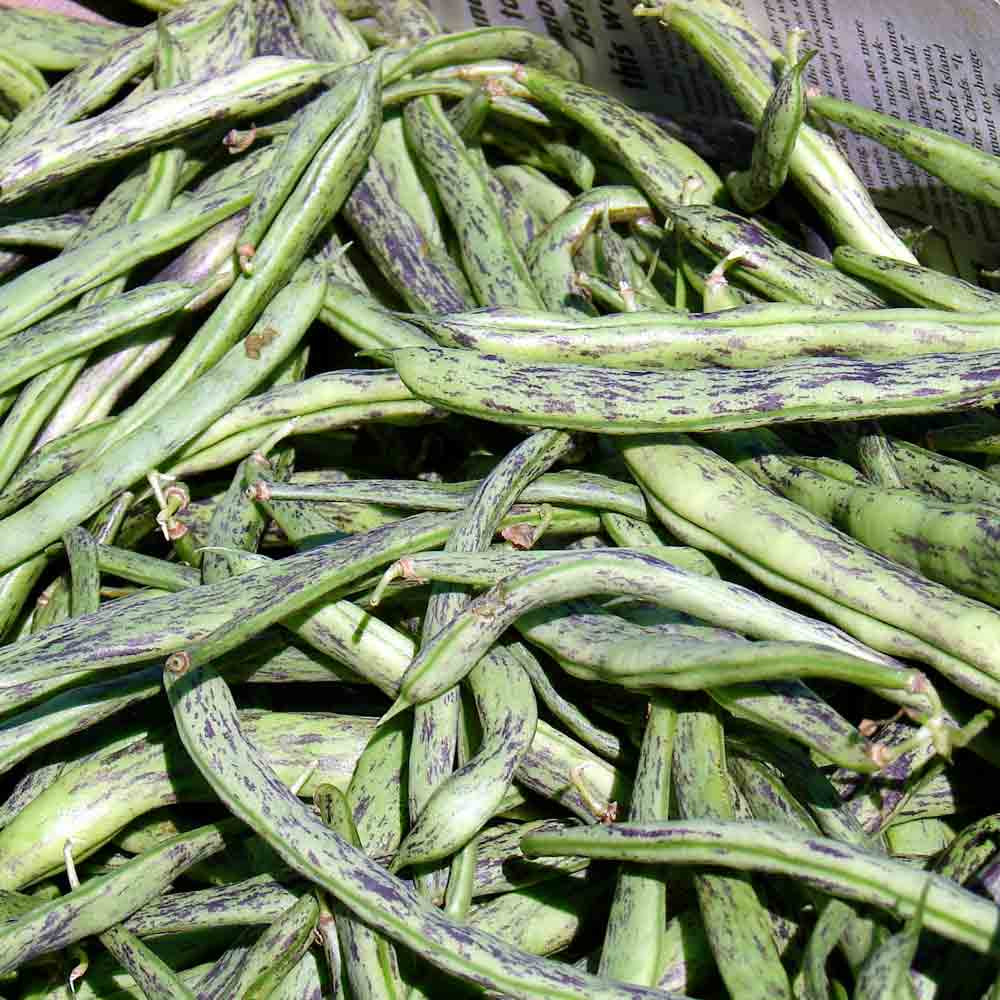 The Rattlesnake pole bean - also called rattlesnake bean and preacher bean - is forgiving to grow, easy to maintain, and a prolific producer, making them one of the best beans for home gardens across the US. The pattern on the long mature bean pods looks similar to the mottled scales of a rattlesnake, giving them their unique name.

It is extremely prolific, with an almost-continuous harvest of dark-green 8" pods mottled with purple that continues until frost. Fast growing, productive, and able to tolerate drought, they are stringless when young, with an excellent fresh flavor and tender texture that doesn't turn to mush when cooked. They also freeze well, retaining their flavor and texture.

Pole beans often produce 2-3 times larger crops than a bush bean in a similar-sized space, because they grow vertically and produce continually over a longer season instead of a couple of flushes as with a bush bean.

Its reputation as a full-flavored bean with a fresh, sweet, rich taste is well documented and often wins over newcomers in their first taste.

One customer commented, "Heat, drought, and pest resistant, they deliver an abundant crop, they are juicy, tender, reliable, and delicious."

Rattlesnake pole beans stand out with their uniquely variegated purple and green marbled pods. Their shape varies from slightly to extremely curved, even on the same plant, and mature pods are usually 6-7" long, but 8" long pods are often seen.

Inside their pods, the beans develop from an ivory white when young into mottled markings of buff and chestnut tones once fully grown. Fresh picked young pods have a sweet snap bean flavor while mature shelled and cooked Rattlesnake beans are plump with a meaty texture and savory, nutty flavors.

Beans were long thought to have originated in Mexico, but recent whole-genome sequencing for beans shows that there are two separate and distinct areas of origin and domestication; one in the Andes, specifically northern Peru and Ecuador, and another in the Lerma-Santiago basin of Mexico, starting about 8,000 years ago.

The earliest documented cultivation of domesticated beans has been discovered in archaeological sites dating about 2,500 years ago in the Tehuacan valley at the Coxcatlan cave.

Smaller beans are thought to have been cultivated in Mexico down into Central America, while the larger beans were cultivated in Peru down into Argentina. High in protein, easy to grow, dry, and cook, they have sustained mankind for millennia.

Rattlesnake beans can be eaten three ways - young as a green bean or snap bean, left to mature and used as a fresh or shelled bean, or left to fully mature on the plant, then shelled and used as a dried bean.

Green or snap beans are similar to grocery store string beans but are more tender and sweeter with better flavor. They are excellent when the entire young bean is sautéed.

When the pods start to turn leathery the beans are used as fresh or shelled beans, which are full size but still tender inside the pod. Cook shelled beans just long enough so they still have a crispness to them. Fresh picked unshelled beans will last in the refrigerator up to a week.

After the pods dry on the vine, the beans are fully mature and will rattle when shaken. After picking the dried pods, store them in a large paper bag for a week or two to make sure they are fully dry. The pods will be brittle and snap or shatter when squeezed hard. This is the dry bean stage and they can store over the winter with ease. Soak the dry beans overnight before cooking like pinto or black beans.

The Rattlesnake pole bean is a strong climber and needs the support of a fence, net, or trellis to grow up. They will grab on to anything, including each other. They make excellent arbors when grown up on each side of an arching trellis, forming a shady arching entrance to the garden. With fertile soil, vines can grow to 10′ tall with pods appearing from top to bottom.

Support can be as simple as a metal pipe driven into the ground to tall tripods lashed together at the top and erected over the beans. Native Americans often planted their tallest sunflowers in bean beds 2-3 weeks before planting the beans, giving the sunflowers a head start. The beans would anchor the sunflowers from being windblown while providing nutrients to the roots.

Pole bean seed germinates best once soil temps have reached 75 to 80°F or higher. Soil temperatures below 70°F will delay germination for a week or more. Seeds can require 3 to 7 days to germinate, depending on the soil temperature.

MSRP:
Now: $3.30
Was:
Kentucky Wonder Pole Bean  - Best Known Pole Bean since 1864 High yielding, extended season bean with a distinctive flavor and good firmness. Pods are fleshy 7-10 in. that grow in clusters with...

MSRP:
Now: $3.45
Was:
Lazy Housewife Pole Bean  Completely string-less beans. Brought to America by German immigrants and first listed in W. Atlee Burpee’s 1888 catalog. These beans were so-named because they were...

MSRP:
Now: $3.45
Was:
Lazy Housewife Pole Bean  Completely string-less beans. Brought to America by German immigrants and first listed in W. Atlee Burpee’s 1888 catalog. These beans were so-named because they...

MSRP:
Now: $3.30
Was:
Kentucky Wonder Pole Bean  - Best Known Pole Bean since 1864 High yielding, extended season bean with a distinctive flavor and good firmness. Pods are fleshy 7-10 in. that grow in clusters with...