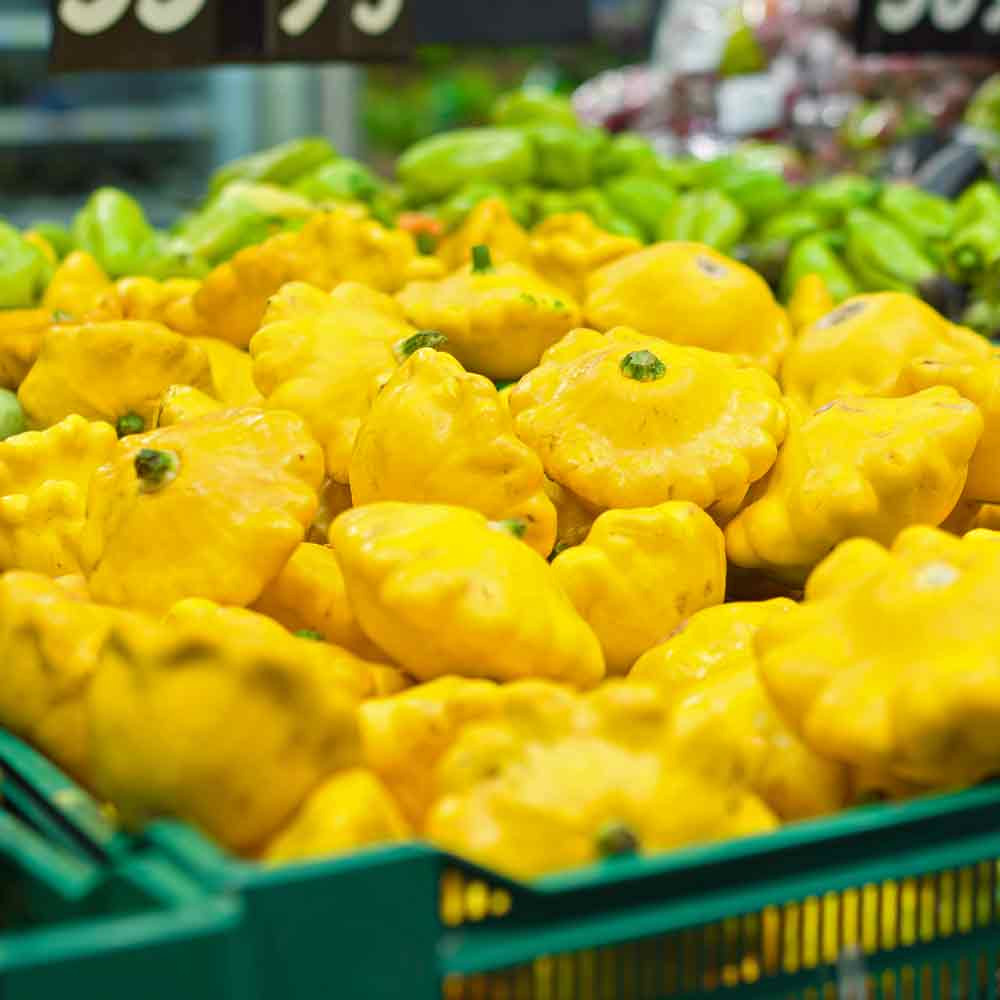 Delicate and tender when young, growing to a more mature yet still mild flavor when full sized, this is one of the larger patty-pan varieties – reaching upwards of 7" across. Golden-yellow fruits with an attractive scalloped edge are easy to see in the dark green foliage. Very easy to grow with good flavor.

Patty-pan squash are fast maturing, making them an excellent choice for those struggling with perennial squash bug issues. These can be planted a bit later to avoid the peak squash bug season while still producing a sizable harvest.

“This squash originated among the native peoples of the eastern United States, for it was known from Virginia to New England by a number of local names in various Indian languages. Both the yellow and white varieties date from pre-Columbian times, although the white has gradually supplanted the yellow over the past century and a half. In England, this squash is known as the custard marrow, in France as the patisson panaché. The old name cymlin or cymling was given to this squash in the 17th century, owing to its similarity in size and shape to the English simnal cake, a fluted cake made during Lent.

One of the oldest depictions of the patty-pan squash appeared in Mattias de l’Obel’s Plantarum seu Stirpium Icones (1591). The fruit looks very much like the patty-pans of today. The fact that this East Coast squash appeared in European botanical works prior to white settlement in the region suggests intriguing pre-contact seed exchanges that have not been given much notice by plant historians.”

When young they are very tasty lightly steamed or pan-roasted and drizzled with a high-quality olive oil, or simply diced into cubes and tossed in salads. After maturing they were often sliced into rings and hung on rods to dry, then stored for winter use by the Native Americans. They were used much like soup stock or a base with other dried and roasted nuts and seeds, making a rich and hearty vegetable stew.

Sow 5 seeds per hill, 4' apart. Thin to best 2-3 plants. Squash seeds dislike cold soil. It's better to wait until the soil is warm to plant the seeds.

MSRP:
Now: $3.30
Was:
Cocozelle Zucchini Summer Squash A rich flavored zucchini that is deep green when young, but ribbed with yellow stripes when mature. Also known as Costata Romanesca.   Originally from Italy;...

MSRP:
Now: $3.30
Was:
Early Summer Crookneck Squash These compact bush-type plants are prolific producers and will fill your garden with swan-necked fruit in shades of yellow that mature to a light orange. The skin of...

Tonda Nizza Summer Squash - "Round of Nice" Early maturing, round, light-green thin-skinned fruits on a bush plant with a flavor all its own.  Pick these "courgettes" at golf-ball size and...

MSRP:
Now: $3.45
Was:
Lemon Summer Squash - Tasty Lemon Lookalike This gorgeous lemon lookalike pleases your eye, brings joy to your garden, and delights your tastebuds. Having the size, shape, and color of a large...

MSRP:
Now: $3.30
Was:
Cocozelle Zucchini Summer Squash A rich flavored zucchini that is deep green when young, but ribbed with yellow stripes when mature. Also known as Costata Romanesca.   Originally from Italy;...

Tonda Nizza Summer Squash - "Round of Nice" Early maturing, round, light-green thin-skinned fruits on a bush plant with a flavor all its own.  Pick these "courgettes" at golf-ball size and...