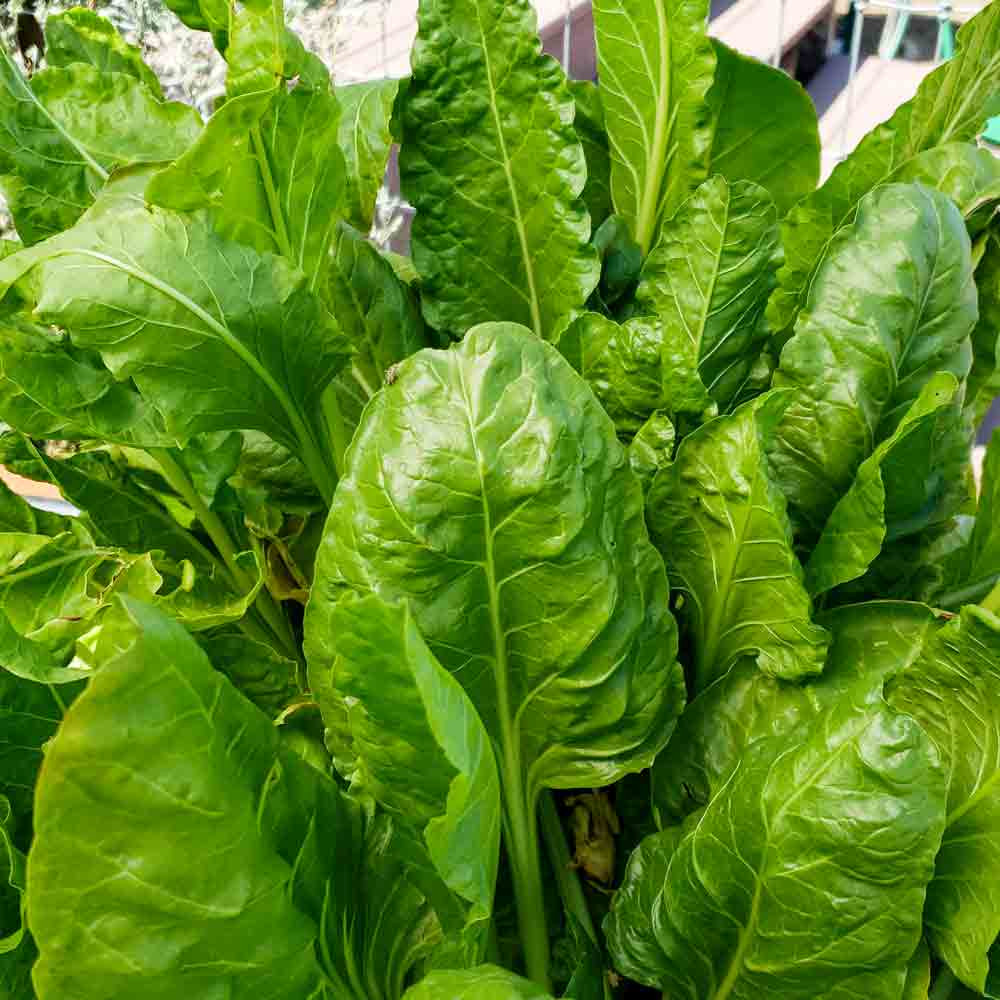 The heavily crumpled or savoyed green leaves have a deliciously mild, sweet flavor comparable to spinach, while the pale celery green to white stems or mid-ribs are succulent when cooked like asparagus, and served with butter.

Lucullus is particularly heat and cold tolerant and very easy to grow, producing a steady supply of greens over a long growing season. Three to four plants will keep most families well-supplied with abundant leaves.

The plants are upright and vigorous, growing 18-22" tall with a spread around 16". Continuous harvesting of the outer leaves keeps producing new growth in the middle.

It can be overwintered in the garden in milder climates, producing a welcome early spring crop. Succession planting from March through August extends the harvest season into the winter, providing fresh greens to family and chickens long after most other greens have faded into memory.

Lucullus Swiss chard is an Italian heirloom variety named after Lucius Licinius Lucullus, a Roman general and patron of the arts and agriculture, renowned for his splendid banquets and vast gardens in the heart of Rome.

His Gardens of Lucullus – where the Villa Borghese Gardens are now located – were the first planned luxury gardens and still cover 17 acres on the original site above the Spanish Steps.

The heirloom seed historian William Woys Weaver states in his book Heirloom Vegetable Gardening that Lucullus is a selection from White Curled Swiss chard, introduced in France in 1828 by the Vilmorin seed company, and Lucullus was introduced in 1890. It belongs to the same group as Bright Lights chard – producing a fine large but thin leaf that is savoyed (crumpled and indented) and fairly delicate in texture and flavor.

Other sources state Lucullus’s origins trace back to Sicily and was introduced in 1914.

Both leaf beets and root beets were developed possibly by the Romans from the wild sea-beet, which occurs in coastal regions of Europe and western Asia.

Swiss Chard is the same species as the garden beet and sugar beet but is grown only for its leaves.

Lucullus has that familiar earthy tang that Swiss chard is rightfully famous for, maintaining its tenderness even when the leaves are quite large. They are always remarkably mild and sweet, yet round and full in flavor, no matter the size of the leaves.

Many gardeners and chefs proclaim this as the best tasting Swiss chard around, with the most spinach-like flavors of the Swiss chards commonly grown.

The leaves become their tastiest as the weather cools, making harvests until the first or second hard frosts common, with many gardeners picking leaves as late as Christmas with a little protection.

After picking, simply wash the leaves and use as you would fresh spinach or salad greens - add to salads, or flash fry in a pan with a dab of butter for only a minute or so.

Swiss Chard is hardy and will grow with little or no attention, its only main need is regular weeding. Water regularly to keep the soil slightly damp to maintain steady growth and sweet flavor.

Harvesting can start as soon as the leaves are large enough to pick, usually about four to six weeks. Younger leaves – about 3" long – are best for fresh salads, while older leaves make an excellent summer spinach substitute.

Swiss Chard is a cut-and-come-again crop, harvest with a sharp knife instead of pulling the leaves off, as this will slow down the growth. You can harvest a combination of larger outer leaves and smaller inner leaves, making sure to not damage the central stalk and developing buds.

Improving Your Soil by Stu Campbell

MSRP:
Now: $3.95
Was:
Improving Your Soil Sometimes, a little understanding and knowledge can go a long way.  Take your garden soil for instance – you can devote multiple lifetimes to studying and learning...