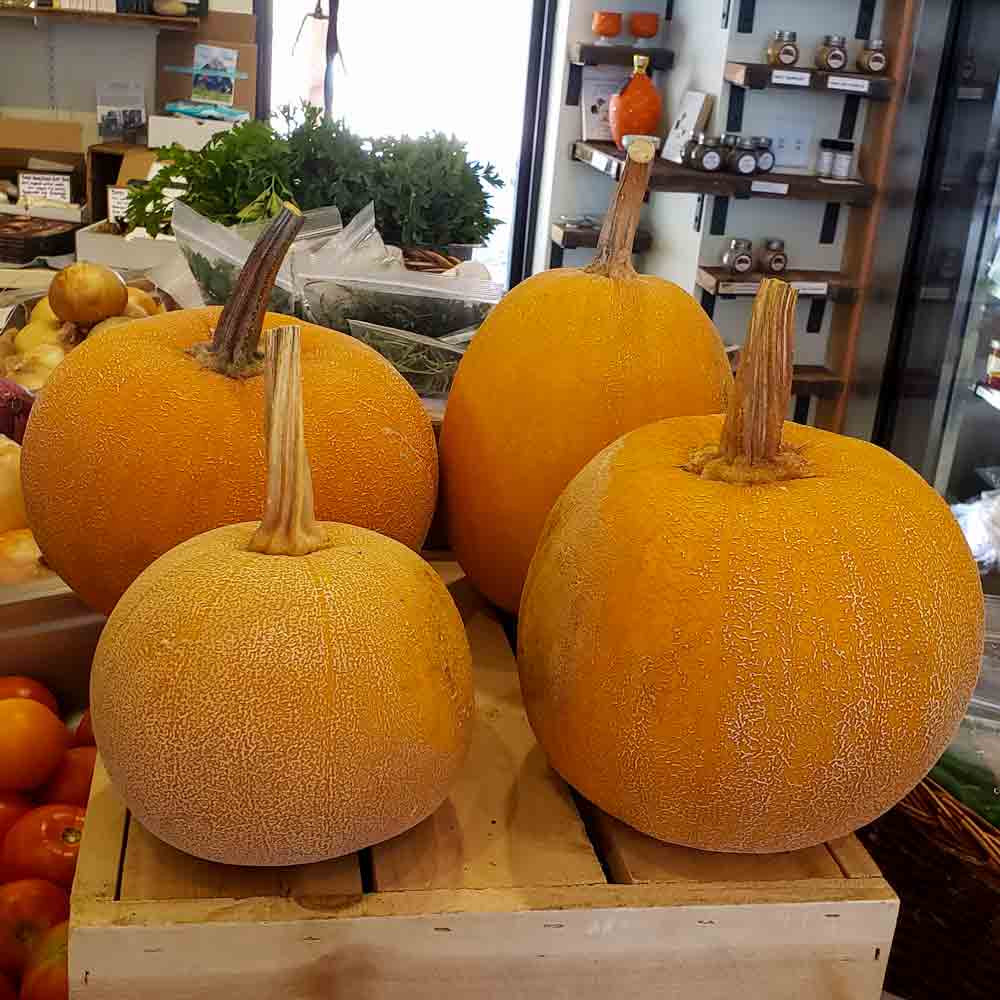 Grown in rich, fertile soil, this pie pumpkin makes the best tasting, smoothest, and most velvety pumpkin pie to be had. Widely considered to be the finest pie stock in existence - even by the most discerning and demanding gardeners, cooks, and chefs today.

When entered into pumpkin tastings, it comfortably captures first place for pie pumpkins, time after time. Comments like "outstanding flavor and texture", "seriously the sweetest pie pumpkins ever", "blew away all my expectations - taste was phenomenal, my family devoured all the pies the first day" are commonly heard.

As they say - the proof is in the pie!

Distinguished by its earthy golden skin covered with fine netting protecting its thick, dense sweet flesh, Winter Luxury pumpkins are usually around 6-8 lbs, with 3-4 fruit per plant. Once cooked, each fruit will yield enough pumpkin puree for 2 unforgettable pies.

Vines can be longer than expected for a small pumpkin, but allowing them their space will prove worth it after harvest time.

First introduced by Johnson & Stokes of Philadelphia in 1893 the original strain strongly resembled the popular Sugar Pumpkin and was smaller, had more yellow coloring, fewer ribs, and was more finely netted than today.

By 1917, the Gill Brothers Seed Company of Portland, OR had selectively bred what we know as the Winter Luxury pumpkin. This was another in a line of famed winter squashes and pumpkins that they were well respected for.

Winter Luxury is unsurpassed in cooking - apart from the familiar pie, cheesecake, and soup uses, it elevates pancakes, muffins, cookies, and banana bread into a completely different realm of flavor.

The best way to capture its essential flavors is to cook it freshly harvested and freeze the puree for later uses.

Bake it whole in an oven on a baking sheet at 350°F for an hour after trimming the stem off and piercing vent holes with a fork a few times. This yields the juiciest homemade pumpkin puree - if a lid is cut before baking it will give a drier pulp.

After it cools a bit, cut a lid and scoop out the seeds and strings, which will come out easily. Be careful not to scoop out the flesh yet, as you don't want to lose any!

Once cleaned, use a large spoon to scoop out the flesh, going all the way to the rind, puree in a food processor or blender, and freeze in jars for later uses.

Rich, fertile, and well-drained soil will yield the best-tasting pumpkins, so don't skimp on the well-aged compost or fish emulsion in preparing the beds.

Pumpkin roots are sensitive and dislike handling, so direct sowing is best if possible. Sow seeds in late spring when the soil temperature is over 70°F first thing in the morning. Seeds should be sown no deeper than twice their length for best germination, and the point or radicle should be pointing downward.

For very late spring or shorter growing season gardeners, starting pumpkin seedlings inside about 3 to 4 weeks before transplanting is fine. Harden off for about a week prior to transplanting, and be very careful to handle seedlings gently. Minimal root disturbance is best and will reward you with stronger plants and better harvests.

Space between rows of pumpkins should be about 6', with in-row spacing of 18-24" between plants.

Pumpkins are ripe when the stem begins to dry and the skin becomes too hard to dent easily with a fingernail.

It is best to harvest before the first frost. Winter Luxury pumpkins can withstand 1-2 light frosts - down to about 32°F - but nighttime temperatures below 28°F can damage the fruit.

Harvest by cutting the vine a few inches from the fruit, and don't use it as a handle as this causes cracking where the vine meets the pumpkin, causing it to deteriorate quickly.

In dry weather, cure in the garden for 5-7 days, or until the stem shrivels, with a cushion of cardboard underneath to protect the fruit. Cure indoors at around 80°F for 5-7 days with good ventilation.

MSRP:
Now: $3.30
Was:
Vegetable Spaghetti Winter Squash Rounded cylindrical buff-tan fruits are 8-12" long and 5-6" in diameter. 5-7 fruits grow per plant, and are mature when skin color changes from cream to bright...

MSRP:
Now: $3.30
Was:
Connecticut Field Pumpkin A popular pumpkin variety for carving and baking, known as Southern Field, Big Tom, Large Yellow and Halloween. This is what comes to mind when you think “pumpkin”...

Lady Godiva Pumpkin - The Naked-Seeded Pumpkin The naked or hulless greenish seeds are very nutritious and rich in protein in this pumpkin and grows to 4-8 lbs, with 12-15 pumpkins per plant and...

MSRP:
Now: $3.30
Was:
New England Sugar Pie Pumpkin - The Classic Pie Pumpkin The bright orange, slightly ribbed fruit will be about 4-5 lbs and averages 6-8" in diameter with sweet yellow flesh.  For...

MSRP:
Now: $3.45
Was:
Musquée de Provence/Fairy Tale Pumpkin A gorgeous French heirloom pumpkin that averages about 15–20 lbs each and is deeply ribbed, looking exactly like fairy tale pumpkins in...

MSRP:
Now: $3.65
Was:
Jarrahdale Pumpkin - Stunning Color with Delicious Flavor The Jarrahdale pumpkin is widely known for its blue-grey-green shell with striking, golden-orange flesh and is highly regarded for its rich,...

MSRP:
Now: $3.30
Was:
New England Sugar Pie Pumpkin - The Classic Pie Pumpkin The bright orange, slightly ribbed fruit will be about 4-5 lbs and averages 6-8" in diameter with sweet yellow flesh.  For...

MSRP:
Now: $3.30
Was:
Connecticut Field Pumpkin A popular pumpkin variety for carving and baking, known as Southern Field, Big Tom, Large Yellow and Halloween. This is what comes to mind when you think...