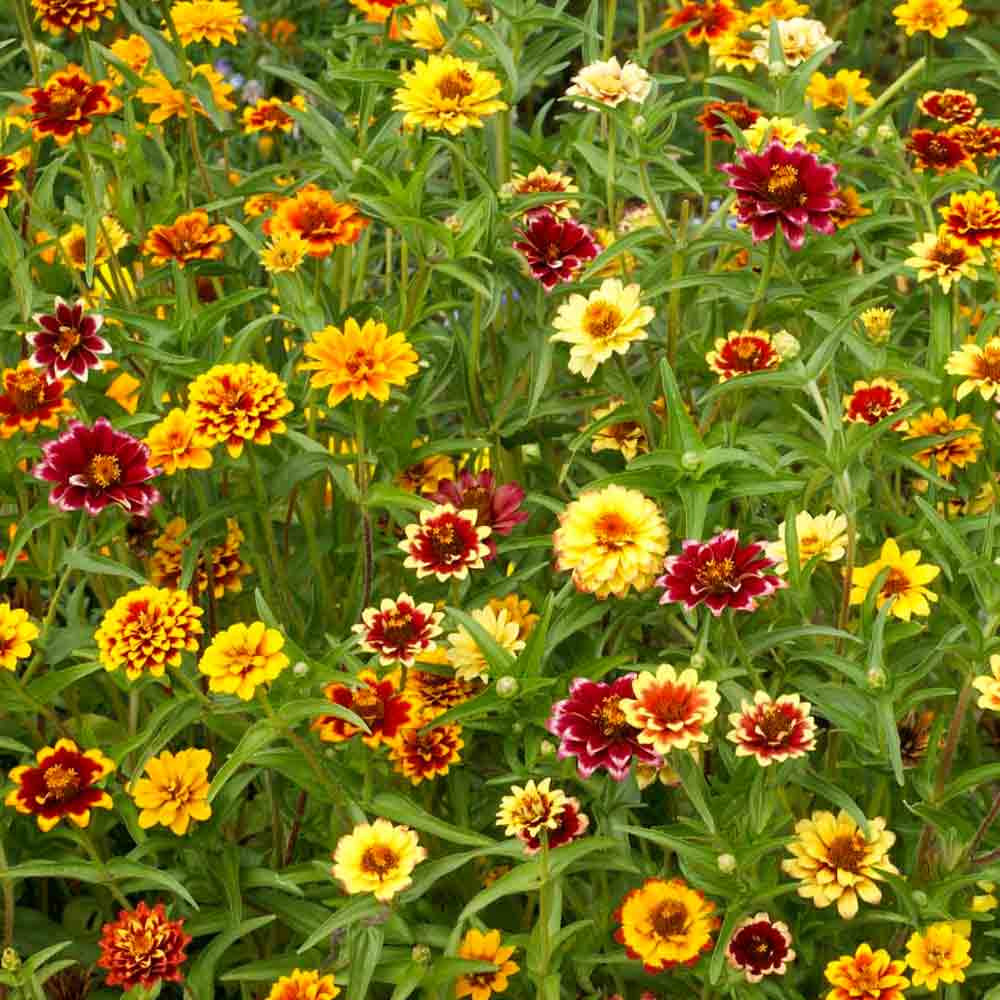 Magnificent non-stop color along with heat, wind, and drought tolerance means nothing equals our Persian Carpet Mexican Zinnia! Dozens and dozens of double and semi-double blooms in yellow, gold, burgundy, cream, and orange with a few whites and pure reds explode all over the dwarf plants, usually almost completely covering the compact bushy plant.

Most blooms are bi-colored having contrasting centers or tips with a few singles. All of them are long-lasting, whether in your garden or showcased in a vase; and entice butterflies, bees, and myriad pollinators into your garden all season long.

This heirloom is a Mexican zinnia rather than the more familiar and common garden zinnia. Plants are dwarf, only about 16” tall and no more than 12” wide, making them the perfect choice for difficult locations with less-than-ideal soil, hot spots like the driveway or walk or full sun areas that are too harsh for other, more delicate flowers.

Leaves are smaller and narrower than garden zinnias with a more bushy, compact habit. They are unaffected by powdery mildew – unlike hybrid zinnias – and thrive in heat and humidity, or hot dry conditions equally well. Blossoms first appear in early summer and only stop when frost takes their energy away.

Sow seeds in well-drained soil with full sun and tiny seedlings appear in days, with flowers powering up in just a few weeks.

Believed to be native to Mexico, zinnias first made their appearance in England by way of Paris in 1753 but were very tall and ungainly. What we know as the garden zinnia arrived from South America in 1796 and were bred for shorter plants with stems having double flowers.

Mexican zinnias arrived in the United States in 1861 and immediate breeding led to the first double flower appearing in 1872.

Professor Casimir Gomez is credited as first sending seeds from Mexico to his friend the marchioness of Bute in Madrid, wife of the ambassador to Madrid and daughter-in-law to John Stuart Bute, the director of the Royal Botanic Gardens at Kew.

The name “zinnia” comes from Johann Gottfried Zinn, an 18th Century German botanist and medical professor at Göttingen University who wrote a description of the flowers around Göttingen.

Zinnias attract and benefit pollinators, while they are pollinated by insects – typically bees and butterflies. Their bright colors draw pollinators into a garden, especially endangered Monarch butterflies who use them for nectar, making them an ideal companion to stands of milkweed.

They are good companion plants for vegetables, deterring cucumber beetles and tomato worms while attracting predatory wasps and hoverflies, which eat pest insects. Hummingbirds are also attracted, which eat whiteflies that damage tomatoes, cucumbers, and potatoes.

MSRP:
Now: $3.30
Was:
Mexican Sunflower - The 'Torch' of the Garden Butterflies of all kinds, but especially the endangered Monarchs, carry a “Torch” for the Mexican sunflower. Swarms of migrating Monarchs are commonly...

MSRP:
Now: $3.30
Was:
Mexican Sunflower - The 'Torch' of the Garden Butterflies of all kinds, but especially the endangered Monarchs, carry a “Torch” for the Mexican sunflower. Swarms of migrating Monarchs...

MSRP:
Now: $3.30
Was:
Fire Chief Dwarf Petunia - First True Red Aromatic Blossoms Fire Chief is the first true red petunia to be introduced and of the 45 pre-1960 All-American Selections award-winning petunias, the only...