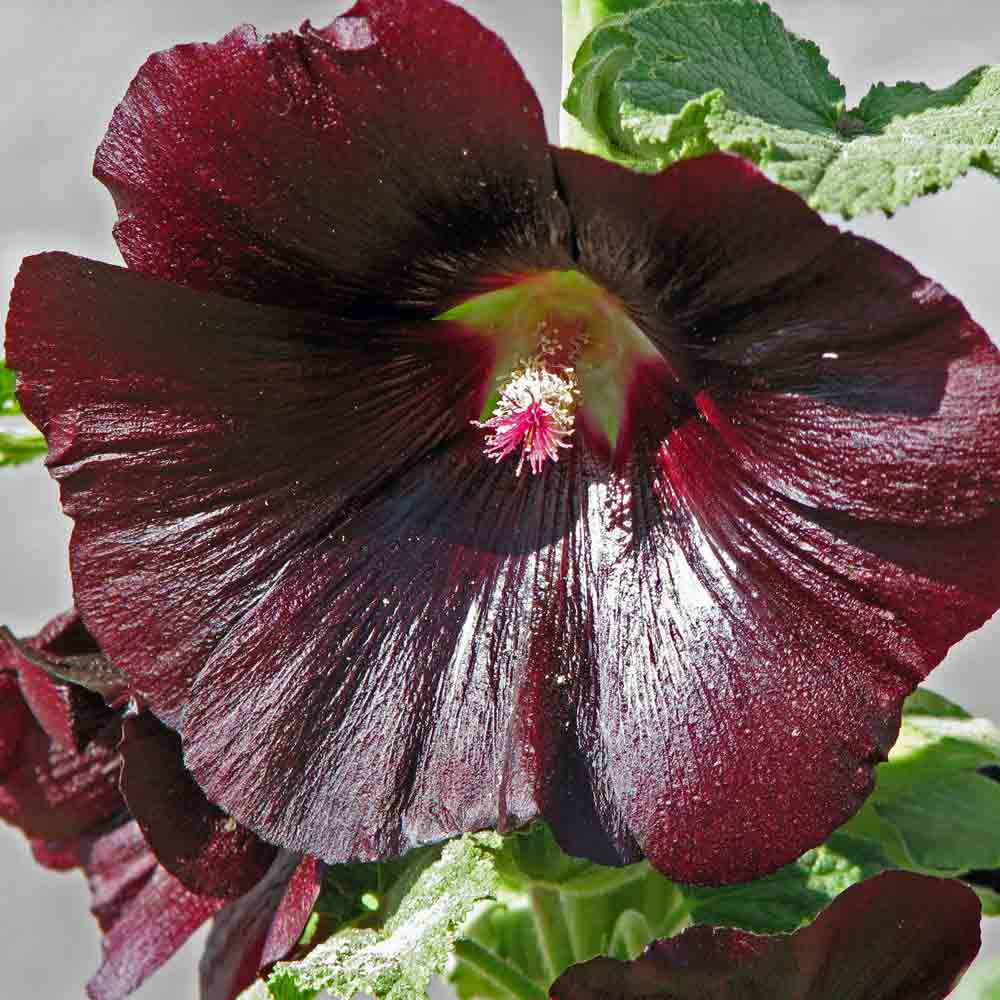 Black hollyhocks are truly impressive with their gently swaying seven-foot tall spikes of mesmerizing silky, dark-purple flowers adding a dramatic counterpoint to gardens and a lovely deep, rose-purple color to herb teas. The elusive maroon-black color of this old garden favorite has fascinated gardeners for centuries; its height, single flowers and rare color combine to create a riveting presence in the garden.

It's no wonder hollyhocks were one of the earliest imports to America. As early as 1629, respected English botanist and herbalist John Parkinson described the black hollyhock as being “of a darke red like black blood,” and Thomas Jefferson grew and valued them at Monticello, and offered by John B. Russe in an 1827 catalog.

Hollyhocks have a very old history with humans, as plants found in a 50,000-year-old grave of a Neanderthal man included the remains of hollyhocks. During the Victorian era, they symbolized both ambition and fecundity in the language of flowers.

Most likely originating in Turkey or Asia, the common name, hollyhock, is very old and doesn't have a clear history. It has been known in England since the 13th century, although originally spelled holihoc, a joining of two words together, holi – for holy, and hoc – an Anglo-Saxon word for mallow. Seeds were brought to Britain from the Holy Land by the Crusaders, making hollyhocks instantly loved and cherished for centuries afterwards.

Early physicians found the flowers useful in treating tuberculosis and bladder inflammation, and soothing herbal compresses and bath preparations were made to treat cuts and bruises. All parts of the hollyhock plant have been used for natural remedies.

Historical tidbit.... Old fashioned hollyhocks grew tall enough to disguise an outhouse...so were called "outhouse hollyhocks". Since outhouses were an unmentionable subject in Victorian days, visitors knew to look for the hollyhocks when seeking the outhouse, rather than asking where it was!

Hollyhocks make great additions to pollinator or wildlife gardens as they are highly attractive to butterflies and hummingbirds. In particular, hollyhocks are used as food plants by the larvae of the Painted Lady butterfly.

The flowers make beautiful dyes, with black flowers yielding hues from pale lavender to dark purple, and all of the red shades giving a yellow coloring. As with most plant-based dyes, they do require a mordant, or fixative to keep the colors in the fabric.

In addition to attracting beneficial pollinating insects, butterflies, and hummingbirds, hollyhocks help out in other ways. They help soothe irritation and inflammation gastrointestinal and respiratory tracts when cold-brewed as an herbal tea. Adding a few crushed flowers to a bath soothes dry skin.

They are very drought resistant and do well in poor, hard soils – as we’ve seen in our home garden. Ours grew from seeds left from last year's flowers, in a bed with the drip system turned off, only getting snow and rain from this past winter.

There was an infestation of bindweed at the other end of the raised bed, so we never turned the drip system on in it. The hollyhocks didn't care - they sprouted and grew just like there was plenty of water available – so much that we forgot we had turned the drip off!

MSRP:
Now: $3.30
Was:
Indian Spring Hollyhock Mix - Tall Graceful Beauties If one flower could embody the feeling of traditional English cottage and country gardens, it is the Indian Spring hollyhock with its towering...

MSRP:
Now: $3.30
Was:
Black Spanish Round Radish - The Winter Radish Very old heirloom radish, grown in Spain since at least the 16th Century and probably long before.  It was first introduced around 1824, and is...

MSRP:
Now: $3.30
Was:
Indian Spring Hollyhock Mix - Tall Graceful Beauties If one flower could embody the feeling of traditional English cottage and country gardens, it is the Indian Spring hollyhock with its towering...

MSRP:
Now: $3.30
Was:
Evening-Scented Stock Pretty purple and lilac flowers are small but their fragrance in the evening is unforgettable. Leaves are usually a gray-green and the perfumed flowers can be produced from...