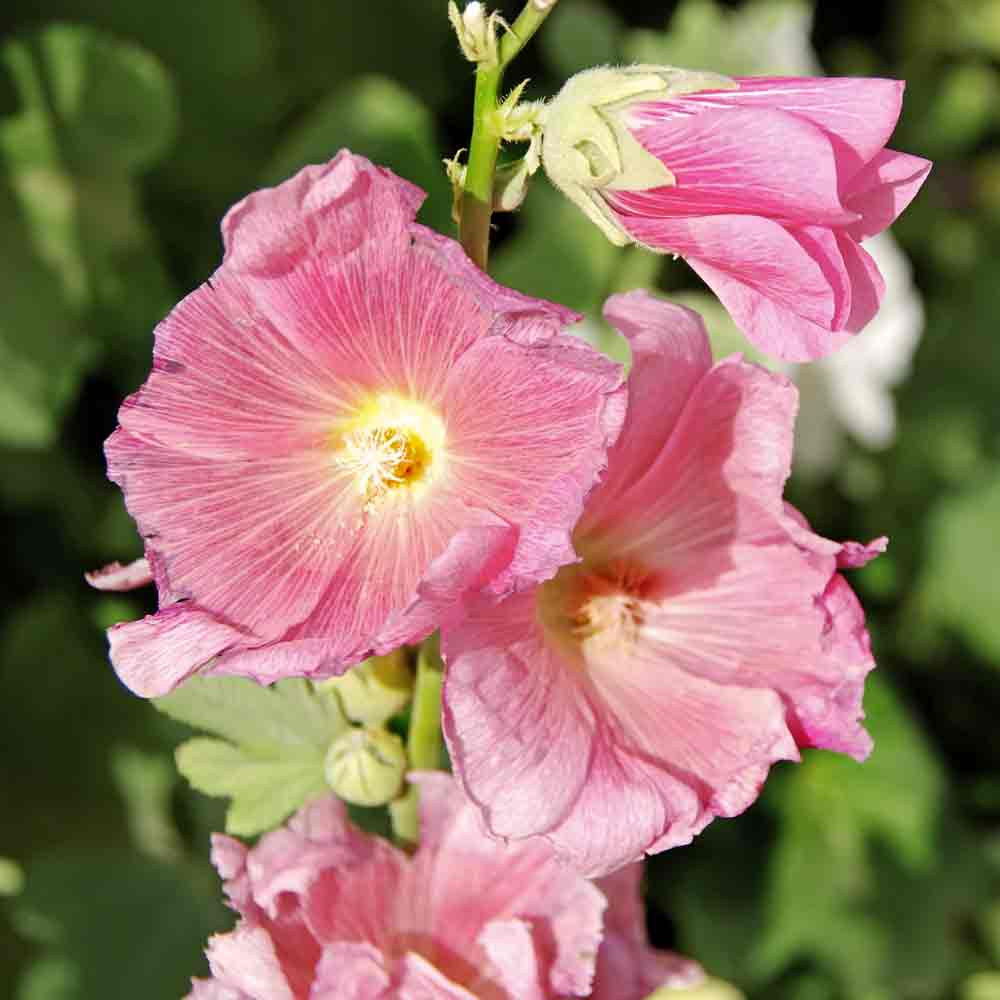 If one flower could embody the feeling of traditional English cottage and country gardens, it is the Indian Spring hollyhock with its towering show of neatly ordered, saucer-sized blossoms in shades of pink and red with the largest at the bottom. Their carefree smorgasbord of colorful flowers can grow to 9' tall, bringing interest and drama while catching your eye and capturing your imagination.

No cottage garden is complete without these tall dancing showy spikes to draw your eyes in and sweep them skyward. Gardens with space enough to allow hollyhocks free reign are unpretentious, happy, and inviting places.

Indian Spring hollyhocks make great additions to pollinator or wildlife gardens as the red and pink flowers are highly attractive to butterflies and hummingbirds. In particular, hollyhocks are used as food plants by the larvae of the Painted Lady butterfly.

Hollyhocks have a very old history with humans, as plants found in a 50,000-year-old grave of a Neanderthal man included the remains of hollyhocks. During the Victorian era, they symbolized both ambition and fecundity in the language of flowers.

Most likely originating in Turkey or Asia, the common name, hollyhock, is very old and doesn't have a clear history. It has been known in England since the 13th century, although originally spelled holihoc, a joining of two words together, holi – for holy, and hoc – an Anglo-Saxon word for mallow. Seeds were brought to Britain from the Holy Land by the Crusaders, making hollyhocks instantly loved and cherished for centuries afterwards.

Early physicians found the flowers useful in treating tuberculosis and bladder inflammation, and soothing herbal compresses and bath preparations were made to treat cuts and bruises. All parts of the hollyhock plant have been used for natural remedies.

Historical tidbit.... Old fashioned hollyhocks grew tall enough to disguise an outhouse...so were called "outhouse hollyhocks". Since outhouses were an unmentionable subject in Victorian days, visitors knew to look for the hollyhocks when seeking the outhouse, rather than asking where it was!

The leaves are edible either raw or cooked and the flower buds and petals add color and intrigue as a garnish for salads or fresh dishes. Also excellent as a long lived cut flower.

The flowers make beautiful dyes, with black flowers yielding hues from pale lavender to dark purple, and all of the red shades giving a yellow coloring. As with most plant-based dyes, they do require a mordant, or fixative to keep the colors in the fabric.

In addition to attracting beneficial pollinating insects, butterflies, and hummingbirds, hollyhocks help out in other ways. They help soothe irritation and inflammation gastrointestinal and respiratory tracts when cold-brewed as an herbal tea. Adding a few crushed flowers to a bath soothes dry skin.

They are very drought resistant and do well in poor, hard soils – as we’ve seen in our home garden. Ours grew from seeds left from last year's flowers, in a bed with the drip system turned off, only getting snow and rain from this past winter.

There was an infestation of bindweed at the other end of the raised bed, so we never turned the drip system on in it. The hollyhocks didn't care - they sprouted and grew just like there was plenty of water available – so much that we forgot we had turned the drip off!

MSRP:
Now: $3.25
Was:
Edible Flowers – Colorful and Tasty Our Edible Flower Mix is a colorful and tasty blend of annual and perennial flowers which are all edible. The culinary world is in love with edible flowers,...

MSRP:
Now: $3.25
Was:
Fragrant Flower Mix This seed mix has been carefully hand-selected with both annual and perennial flowers for a painter’s palette full of gorgeous colors with lovely, captivating fragrances...

MSRP:
Now: $3.25
Was:
Spicy Greens Seed Mix A perfect mix of greens for use in your favorite salad, sandwich, stir-frys or eggs. Harvest the young sprouts, shoots and leaves for a different taste treat or let mature and...

MSRP:
Now: $4.15
Was:
Sandwich Mix Sprouting Seeds The Organic Sandwich Sprouting Mix is one of the best and easiest ways to have incredible flavor and nutrition in almost no space at any time of the year. The Sandwich...

MSRP:
Now: $3.25
Was:
Hummingbird & Butterfly Mix  This great hand-picked mix of 23 annual and perennial flowers from Aster to Zinnia creates a habitat to attract and feed the hummingbirds and butterflies to...

MSRP:
Now: $3.25
Was:
Fragrant Flower Mix This seed mix has been carefully hand-selected with both annual and perennial flowers for a painter’s palette full of gorgeous colors with lovely, captivating fragrances...

MSRP:
Now: $13.55
Was:
Hummingbird Garden Seed Collection Hummingbirds are one of the most ethereal and captivating creatures known. From their diminutive size and dazzling beauty to their status as objects of affection...