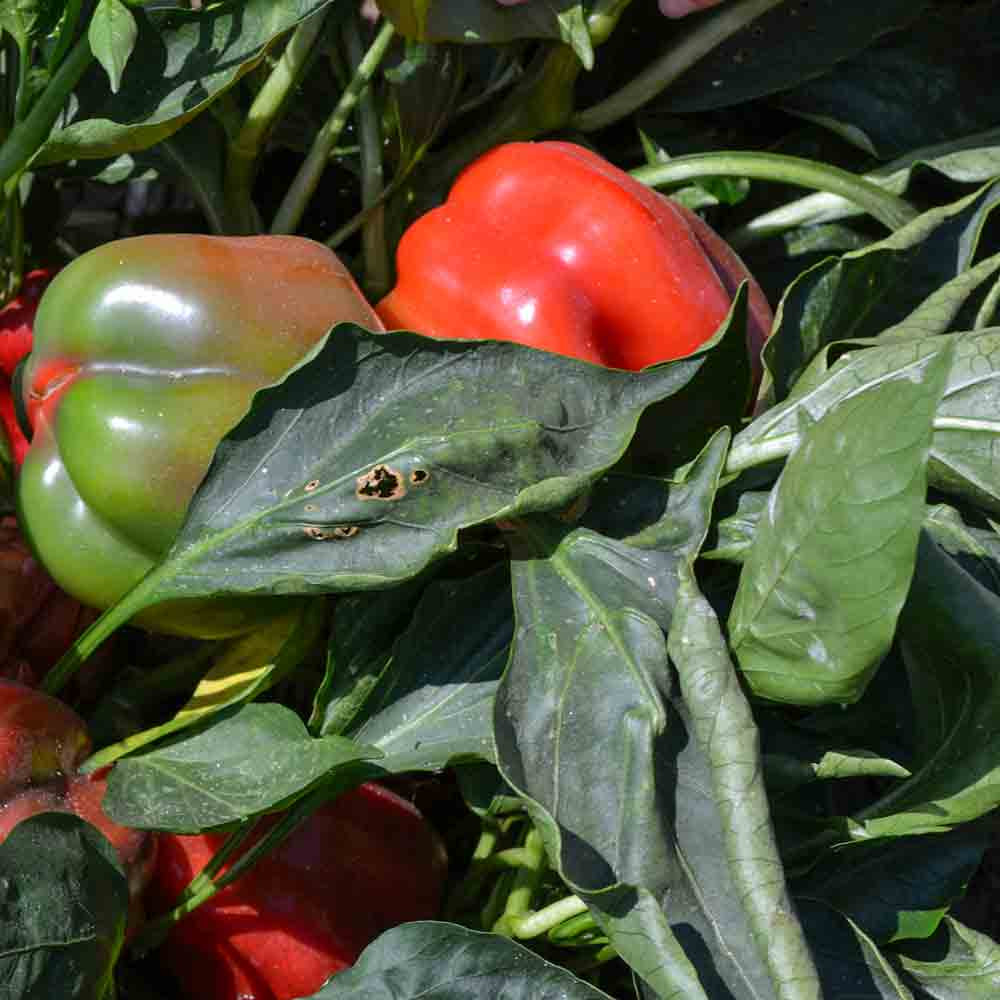 The Bull Nose sweet pepper distinguishes itself from newer bell pepper varieties by the crinkled "nose" on the blossom end of the pod. This very early bell pepper ripens uniformly, turning from pale green to bright scarlet red with a memorable flavor - the flesh is sweet while the ribs can be a tiny bit spicy.

A prolific producer, it is excellent fresh, or stuffed, and was historically pickled while still green.

Considered to be one of the first varieties of medium-sized bell or sweet peppers grown in the United States, Bull Nose peppers were named after the indentation on the blossom end thought to resemble a bull's nose and were one of the most popular peppers in the 1800s.

The fruits are smooth and glossy, ripening from green to bright red and tapering to multiple lobes on the blossom end, also known as a "bull nose." The flesh is thick and crunchy, with a cavity enclosing pale red ribs holding numerous round, flat cream-colored seeds.

The Bull Nose bell pepper is smaller yet richer, sweeter, and noticeably more flavorful than the common grocery store peppers today. A common comment is that store-bought bell peppers taste like water in comparison. Green peppers have a substantial flavor, just not as sweet.

Plants generally grow to about 2' tall, are bushy with lots of broad leaves that shade the developing fruit. With fertile soil, one plant can produce a dozen fruit.

The Bull Nose Pepper is one of the oldest named varieties in the seed trade, which appears in the mid 18th century as a blocky, somewhat squat irregularly lobed pepper, with a strongly creased blossom end. The original was probably smaller than what we know as the modern Bull Nose pepper, and at least in some types, it was mild to moderately hot.

In the United States, Bull Nose peppers were originally planted in Thomas Jefferson's Monticello garden in 1774, recorded in his 1812 garden calendar, and are one of the varieties still grown in the gardens today in homage.

Philadelphia painter Raphaelle Peale painted a group of still-life Bull Nose peppers about 1814, showing the pods in that period were smaller than the Bull Nose grown today. In 1865 Fearing Burr described the Bull Nose pepper that was much blockier with little to no heat. It retained the four small lobes on the blossom end, consistent with the peppers painted by Peale in 1814.

A Victorian variety called Bull Nose or Improved Large Bell appeared in many seed catalogs late in the 19th Century, measuring about 3" long and 2" in diameter, boxier than the old variety with thicker flesh, and usually described as sweet.

In 1796, Amelia Simmons published "American Cookery", mentioning the Bullnose Pepper by name, showing the impact this pepper had on gardeners in the early years of the United States. Amelia Simmon's cookbook is significant as it is most likely the first completely American cookbook written and published in the United States. All cookbooks before this were written and published in Britain.

The Bull Nose variety seems to have originated in India around 1759 and was brought to America soon afterward.

With the Bull Nose Pepper's continued success with gardeners and cooks, it became commercially available in 1853.

The center of origin for all chile peppers was long thought to be in a "golden triangle" area of southern Mexico and Central America. However, recent research - published in 2014 by a team of plant scientists, ethnobiologists, and agroecologists from UC Davis; University of Arizona's Southwest Center; the World Agroforestry Centre in Nairobi, Kenya; the Universidad Autónoma de Aguascalientes in Aguascalientes, Mex.; and the Centre National de la Recherche Scientifique in Montpellier, France - indicate otherwise.

The research, based on linguistic and ecological evidence along with traditional archaeological remains and genetic data, indicates the origin of the domesticated chili pepper to be the central-eastern states of Mexico encompassing Tamaulipas, Nuevo León, San Luís Potosí, Veracruz, and Hidalgo. The oldest remains were found in dry caves in the Tehuacán Valley - state of Puebla, southeast of Mexico City; and the Ocampo caves - state of Tamaulipas. The remains roughly date back to 7,000-9,000 years ago.

The Aztecs had named dozens of varieties by the time Spanish physician Dr. Francesco Hernandez documented seven peppers with their Nahuatl names in his Quatro Libros de la Naturaleza (1651).

Chile peppers were then introduced to Asia, Africa, and Europe through Portuguese and Spanish trade routes in the 15th and 16th centuries, and the pepper became extensively cultivated, especially in Asia. Through years of selective breeding, many new varieties were developed, and these peppers were eventually shared with the United States in the 18th century.

Bull Nose peppers are well suited for both raw and cooked dishes such as grilling, roasting, and baking. Picked fresh, the peppers are often sliced into rings and tossed into salads, or layered into lettuce wraps or sandwiches.

The thick and sturdy peppers are well suited to stuffing - filled with cheeses, grains, vegetables, or meats, and then baked or grilled. Bull Nose peppers can also be sliced and fried, pickled for extended use, chopped and topped over tacos, or lightly stir-fried with other vegetables.

MSRP:
Now: $3.65
Was:
Nadapeño - The Sweet Jalapeño The Nadapeño is the perfect choice for anyone wanting all of the delicious jalapeño flavors without the spiciness. Imagine your salsas, nachos, and poppers with all of...

MSRP:
Now: $3.45
Was:
San Marzano Tomato - The Original Plum Tomato Rectangular flat-sided intensely red fruits 1 1/2" x 4" long, borne in clusters, this tomato is one of the most important commercial tomatoes of...

MSRP:
Now: $3.30
Was:
California Wonder Red Sweet Pepper – America’s Favorite Bell Pepper After nearly a century, this is still the standard by which all other bell peppers are judged, and widely considered...