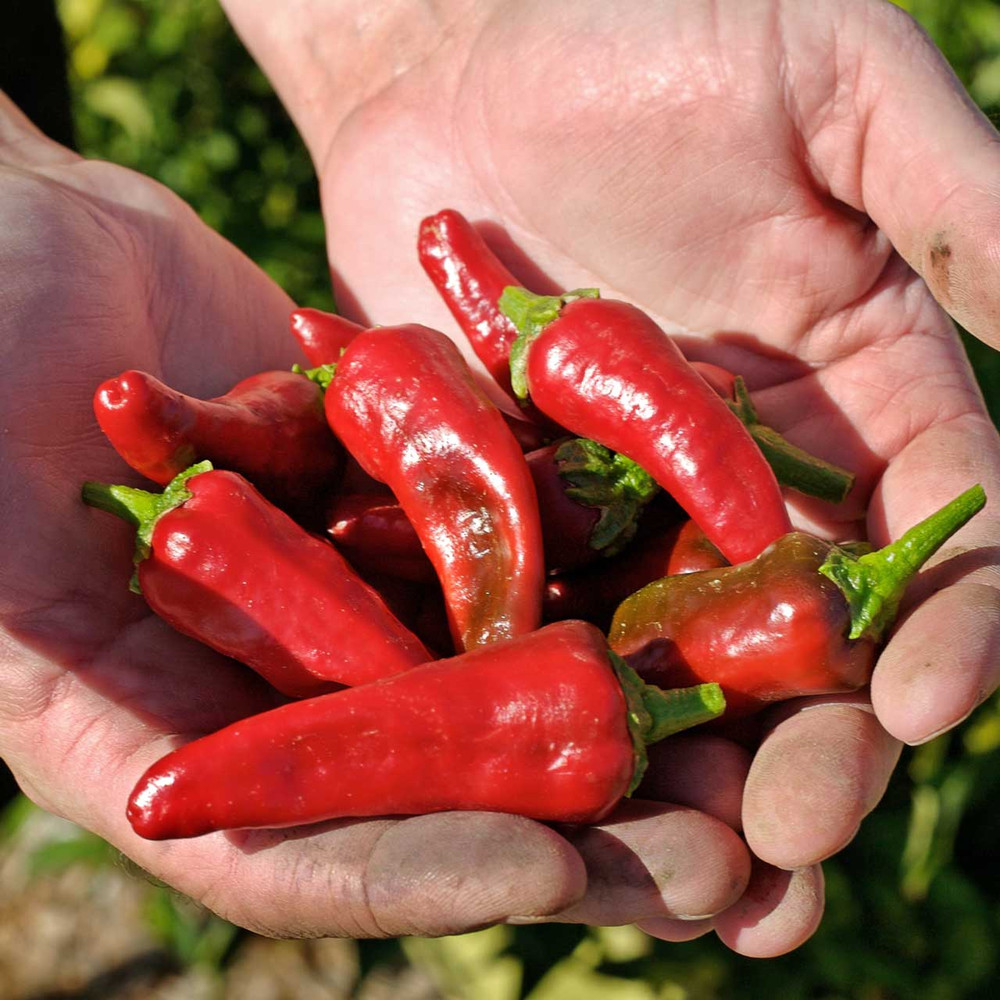 The plants are short and bushy, not over 2' with a thin skinned 4-5" peppers with medium heat that subsides quickly. The veins and ribs are extremely hot.

The Concho pepper is a very unique and little known chile from Concho, AZ. It is a New Mexican type, similar to the land-race varieties Chimayo or Espanola.

Historically, it was planted by the "pinch" about 3/4 - 1" deep, and the plants would help support each other as they grew. Three seeds were planted in each hole and tradition has said one for the birds, one for God and one for the farmer.

It was traditionally used green in stews and soups or dried, crushed into flakes and used to preserve and flavor meats. Local history indicates that the pepper was obtained from Spanish explorers by ancient Puebloans, and grown locally ever since. Very little known outside of North Eastern Arizona. We are excited to preserve this heirloom chile!

Chilhuacle Rojo Hot Pepper – Ancient and Rare Oaxacan Treasure  One of the oldest, rarest and difficult to find pepper varieties, grown only in a small area of La Cañada, just...

MSRP:
Now: $3.25
Was:
Jalapeño M Hot Pepper - The Original Jalapeño An improved historical pepper that is ubiquitous in Mexico and the American Southwest. It has a medium heat with a great flavor either...

MSRP:
Now: $3.25
Was:
Poblano/Ancho Pepper - Fresh or Dried This thick-walled stuffing pepper is 4" x 2 1/2" at shoulder and turns from black-green to red-brown when ripe. Concentrated fruit set on beautiful 2-3'...

Chilhuacle Rojo Hot Pepper – Ancient and Rare Oaxacan Treasure  One of the oldest, rarest and difficult to find pepper varieties, grown only in a small area of La Cañada, just...

Espelette/Basque Hot Pepper  - (Ezpeletako bipera)  The treasured chile of the Basque country, known for its robust and slightly smoky flavor. Some chiles are given treasured...

Chile de Agua Hot Pepper - Treasure of Oaxaca  A triangular, conical shaped pepper about 4" long and 1 - 1 1/2" wide at the shoulders, tapering to a pointed tip. The skin is shiny, smooth and...

MSRP:
Now: $3.60
Was:
Beaver Dam Hot Pepper A Hungarian heirloom pepper brought to Beaver Dam, Wisconsin in 1912 by the Joe Hussli family. Tapered fruits are crunchy and mildly hot when seeded. They mature from...

MSRP:
Now: $3.60
Was:
Lemon Drop Hot Pepper – Addictive Spicy Citrus Flavor For those who love their chile heat with a citrus tang, this is the pepper to know and grow. Also called Aji Limon or Lemon Chile and very...