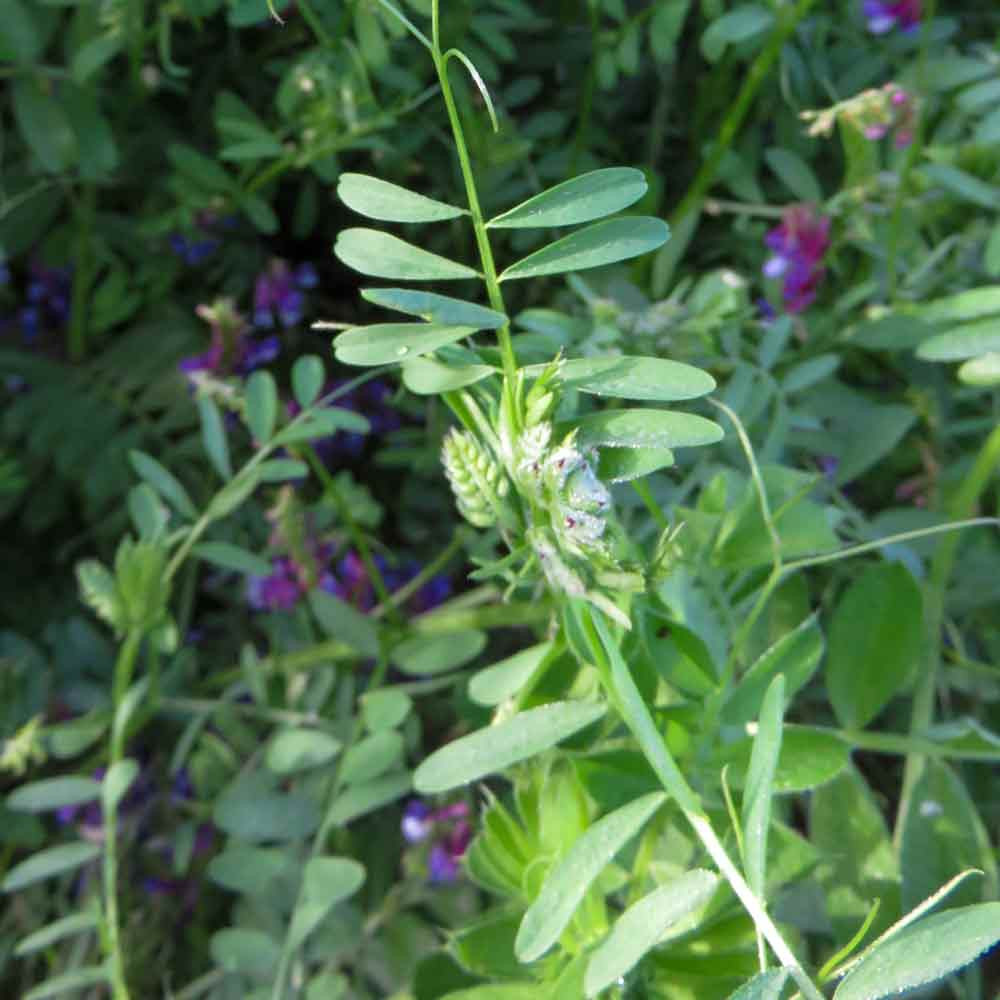 Hairy vetch is almost unsurpassed as a spring cover crop for mulch and root mass production, along with nitrogen fixing. Widely adapted and winter hardy through Zone 4, vetch grows a bit more slowly in fall but its roots continue growing through winter if not killed by mowing or weed whacking. If left to overwinter, vetch will grow vigorously in early spring creating a very abundant and viney biomass if left to grow.

Vetch’s benefits begin with the amount of nitrogen it can produce and fix into the soil, sometime enough for a following crop of corn without any additional nitrogen fertilizer. Its extensive root mass increases winter and spring soil moisture retention as well as aeration, soil structure, organic matter and increased carbon content. As the roots decompose they increase biological activity and beneficial insect populations just above and below the soil surface.

Hairy vetch improves topsoil tilth, creating a looser and more friable soil structure, but doesn’t increase long term organic matter due its rapid and total decomposition, which feeds the soil in the short term. It scavenges excess or unavailable phosphorus, storing and releasing it as the plant matter decays.

The very vigorous spring growth out-competes weeds by filling in and shading out bare soil, while also excluding nutrients from weed seeds and providing a weak allelopathic effect which hinders the germination of weed seeds. Cool season weed control is greatly enhanced when planted with cereal rye or oats.

Hairy vetch is more drought tolerant than other vetches once established and when over-wintered.

Because of its high nitrogen production, vigorous growth, tolerance of diverse soil conditions and low soil fertility needs hairy vetch is an important tool in the organic farmer and gardener’s toolbox for both fall and winter as well as spring cover crops.

Lightly broadcast seeds and work into the top half inch of moist soil, or cover with 1/2 inch of mulch or compost. Water to equivalent of 1 inch of rainfall per week until seedlings become established. Do not fertilize as this delays the nitrogen fixing action of the legumes.

MSRP:
Now: $3.40
Was:
Broad Windsor Fava Bean - Delicious Multipurpose Garden Worker One of the tastiest and largest of garden beans - often the size of a quarter - and perennially popular, especially in European...

MSRP:
Now: $27.00
Was:
Kitchen Herb Seed Collection What is a Kitchen Herb Garden? In its purest form, a kitchen herb garden is simply an herb garden focused around growing the culinary herbs you use most often in your...

MSRP:
Now: $3.30
Was:
Japanese Minowase Radish/Daikon Radish An early pure-white tender roots are 3 in. in diameter and to 1 or 2 ft. long. Sweet, white crispy flesh with a unique flavor. Fresh favorite in Chinatown...