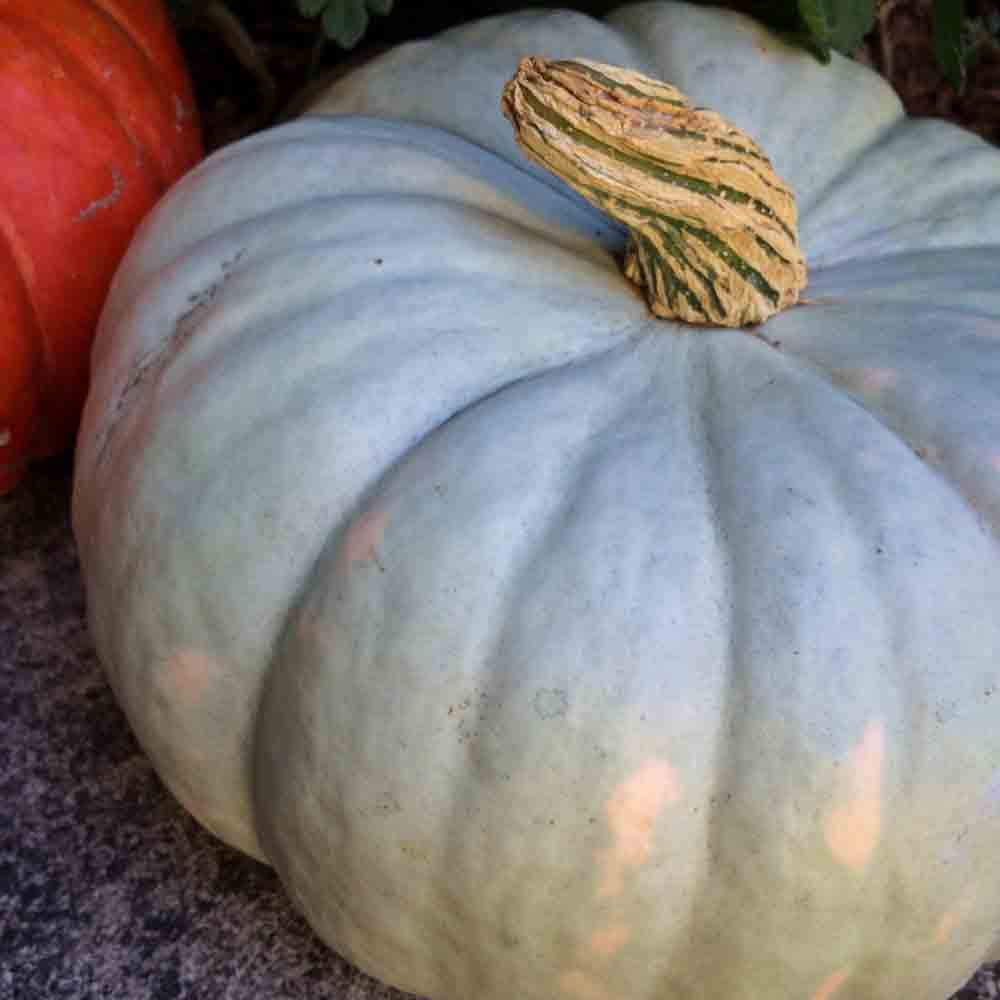 The Jarrahdale pumpkin is widely known for its blue-grey-green shell with striking, golden-orange flesh and is highly regarded for its rich, sweet flavor. It is almost universally prized for its signature contribution to pies, scones, soups, stews, and pancakes.

Slow roasting caramelizes the bright sweetness into a deeply rich, concentrated pumpkin flavor with a creamy texture that makes any commercial pumpkin seem watery and flavorless in comparison.

One of the most-heard comments is, "It's amazing for pies!"

This medium-large heirloom pumpkin stands out with its unmistakably unique rind colored in shades of bluish-gray with hints of green undertones, looking like no other pumpkin in the garden or farmer's market.

Young Jarrahdale pumpkins start out as a beautiful seafoam green that darkens as they age.

Mature pumpkins range from 12 to 18 lbs with noticeable ribs and often have a flattened shape. They have thick, dense golden-orange flesh that is almost stringless with a small seed cavity inside.

Properly cured and stored, their moderately thick rinds can keep for several months.

Jarrahdale pumpkin is a blue pumpkin variety that gets its name from the town of Jarrahdale in Western Australia, just southwest of Perth.

The exact history is a bit murky, but the Jarrahdale is likely a cross between the Blue Hubbard squash and the Cinderella pumpkin, both of which grow well in Western Australia. Blue Hubbard contributes its hard rind, coloring, and flavor, while the Cinderella gives it the flattened shape and brightly colored flesh.

One theory suggests that local growers liked the flavor and storage life of the Blue Hubbard, but wanted an easier shape to handle with the flavors of the classic Cinderella pumpkin, so several crosses were made and the most appealing cross was selected and grown out ever since. Their stunning color drew the eyes of cooks and home gardeners, and their sweet mellow flavor and versatility in the kitchen made them popular wherever they traveled.

From there, the pumpkin spread through railroads to the rest of Australia and New Zealand, as Jarrahdale was an important timber junction from Perth in the late 18th to early 20th Centuries. It first arrived in the US in 1932 from Arthur Yates & Co. of Sydney.

Jarrahdale pumpkins slate blue-green coloring makes these pumpkins a focal center point in seasonal decorations, their long storage life combined with their versatility in the kitchen makes them a true multipurpose vegetable.

After harvest, they will brighten up your home, then sit quietly in storage until needed, when they will add interest and flavor to your dishes.

Slow roasting brings out the best, richest flavors of this pumpkin, but it can also be baked or steamed with excellent results. The creamy, stringless flesh lends itself well to both sweet and savory dishes, desserts, and baked goods.

Soups, stews, and curries are excellent dishes where the texture and flavor accent and enhance the results. Other dishes where roasted Jarrahdale pumpkin shines are risotto, gnocchi, ravioli, pasta sauces, muffins, and pancakes.

One amazing but unusual dessert is to roast bite-sized sliced wedges until very soft, then drizzle a little honey and finish with a sprinkle of mild chile powder.

As with most pumpkins, Jarrahdale needs space - each plant grows 12 - 24" tall with vines reaching 10 - 15' long, and will produce, on average, from 3 to 5 fruits per plant, so plan accordingly.

One proven method of growing pumpkins in a smaller garden is planting them at the far corner of the garden, in the corner of a bed, and train the vines to sprawl along the less-used walkway. If you have squash beetle or vine borer problems, protect the vines with folded shade cloth, several layers of newspaper, or cardboard to prevent contact with the soil.

Pumpkins like at least six hours of sunlight per day, but can do well in partial shade - either early to mid-morning or late afternoon.

For the best flavor, harvest these pumpkins just before your first expected moderate frost, as this gives them time to fully mature. They can tolerate one or two light frosts to 28°F, but the fruit can be damaged by colder temperatures.

Clip the vine 3-4" from the fruit when the vine, but avoid picking up by the "handle" as it can damage where the vine connects to the fruit, leading to a shortened storage.

Cure freshly harvested Jarrahdale pumpkins by letting them sit in the sun for 7-10 days, which allows the rinds to harden. If needed, protect the underside from damp soil with a square of cardboard or folded newspaper. The rind hardens as it cures, so when fully cured it will be very resistant to a thumb pressing on it.

MSRP:
Now: $3.45
Was:
Galeux d'Eysines Pumpkin - The Forgotten Heirloom This peach colored French pumpkin is shaped like a wheel of cheese and covered with pebbly bumps and filled with firm, tender, very sweet bright...

MSRP:
Now: $3.45
Was:
Musquée de Provence/Fairy Tale Pumpkin A gorgeous French heirloom pumpkin that averages about 15–20 lbs each and is deeply ribbed, looking exactly like fairy tale pumpkins in...

Lady Godiva Pumpkin - The Naked-Seeded Pumpkin The naked or hulless greenish seeds are very nutritious and rich in protein in this pumpkin and grows to 4-8 lbs, with 12-15 pumpkins per plant and...