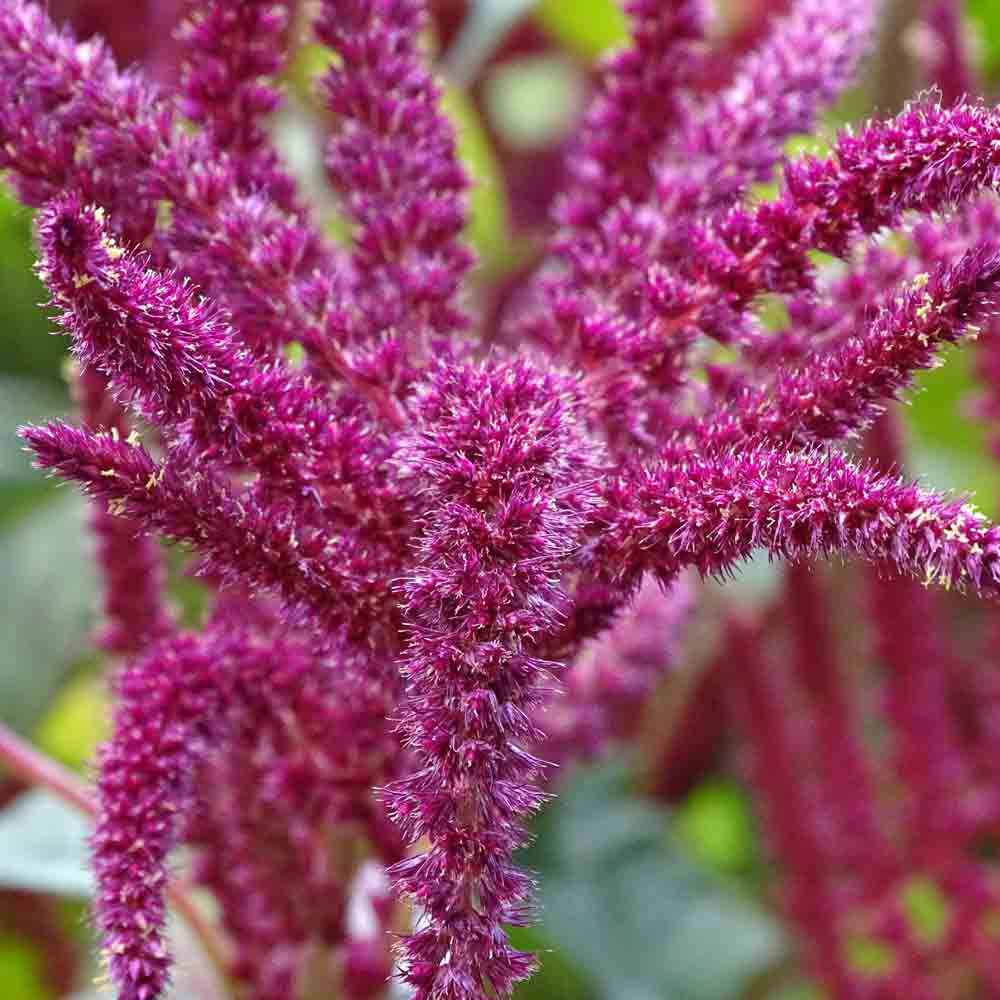 Often seen as an adorable, old-fashioned, cottage garden flower with its long, graceful wine-red ropes of tiny burgundy blossoms, Love Lies Bleeding belongs to an ancient plant family with a dramatic history. Known as “Huaútli” (wow-tlee) in the native Aztec Nahuatl language, amaranth was grown as food, revered in sacred rites, and valued as tribute payments as long as 6,000 - 8,000 years ago.

The word amaranth comes from the Greek amárantos, meaning “unfading” with the Greek word for flower ánthos, forming amaranth, or unfading flower.

They are easy to grow, adding vibrant, eye-catching color and drama to any garden, and cut bunches of the colorful tassels make riveting decorative vase flowers. Depending on the soil fertility, love lies bleeding can grow from 2 - 8’ tall with multiple 2’ long ropes of flowers, each made up of hundreds of individual tiny flowers. It is very hardy once established, capable of producing a crop of seeds with up to 40 days of no rain. It is drought tolerant once growing and thrives in full sun. Frost helps dry the seeds, preparing them for harvest.

Both the seeds and young leaves are edible and quite tasty. The seeds have a nutty flavor and are toasted like sesame seeds, cooked like oatmeal, popped like popcorn, and ground into flour. Young leaves and stems are used like spinach or stir-fried in Asian countries.

Banned by the Spanish conquistadors and the Catholic church in 1519 because of its use in religious ceremonies. Victorians collected this “exotic” plant, fell in love with the tall, graceful stalks with the striking flowers and made it a popular garden flower. They named it Love Lies Bleeding, giving it a place in the Victorian language of flowers to represent hopeless love.

Grown by Thomas Jefferson as early as 1786. Sometimes called Inca wheat, Amaranthus caudatus was a staple grain for the Incas and Aztecs.  Nearly as important in their diets and as widespread in tropical areas of America as was maize (corn).

The cereal-like grain (about the size of a poppy seed) is high in protein, and high in lysine, an amino acid usually deficient in vegetables. In fact, amaranth seeds are extremely nutritious, with more protein than most cereals and a better balance of amino acids for the human diet than any other plant. The species is still cultivated in Bolivia, Peru and Ecuador, and now in India for its young leaves and seeds.