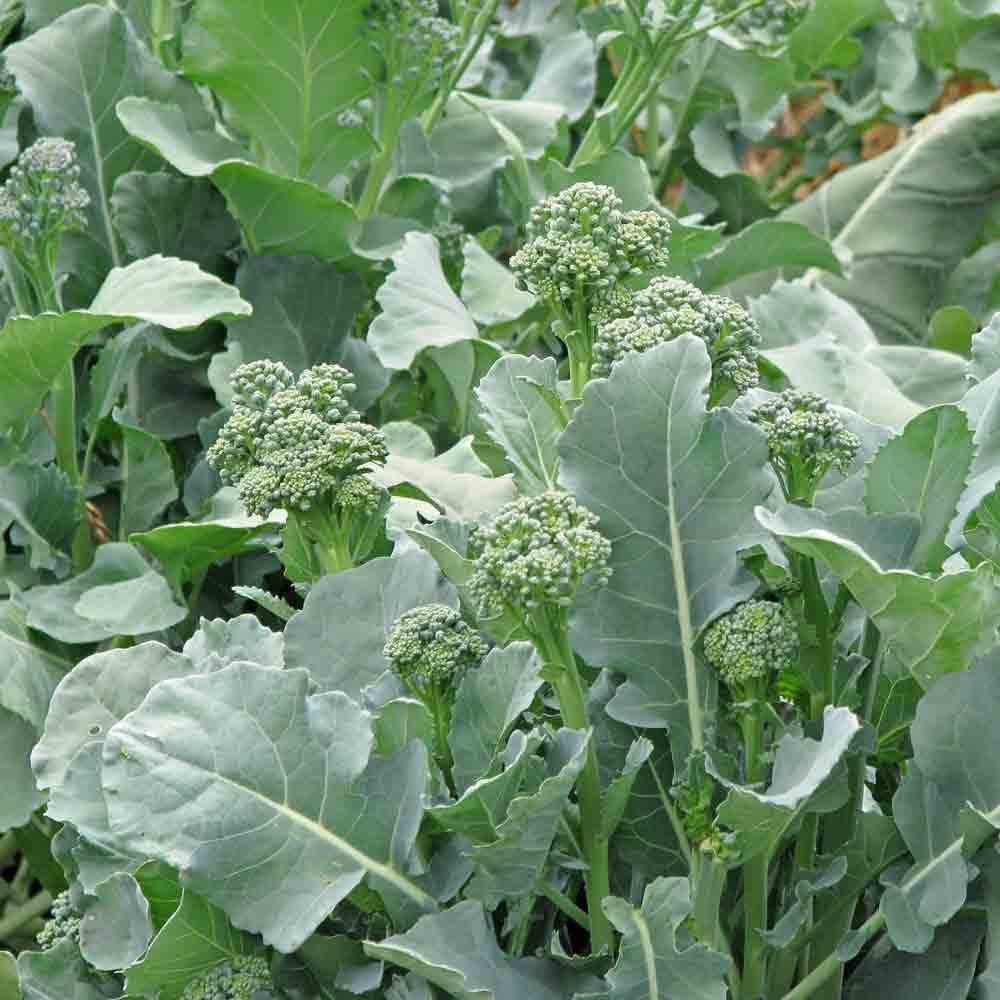 At first glance, this deep green, leafy vegetable with tender budding shoots looks almost common, yet is a truly ancient green with a perplexing history that is loved and claimed by many cultures.

The tangle of green leaves and branching shoots resemble a sprouting or shoots-and-leaves broccoli, never quite forming a head the way broccoli does. The tender shoots have a slightly spicy/peppery, broccoli-asparagus flavor that gives zing to salads, stir-fries, and steamed dishes. Great as a very early spring or a fall and winter crop.

Best known in the United States as broccoli raab or broccoli rabe, it could be called the vegetable of a thousand names. Some of the many names it is known by are raab, rapa, rapine, rappi, rappone, fall and spring raab, turnip broccoli, Italian or Chinese broccoli, broccoli de rabe, Italian turnip, and turnip broccoli.

Brassicas are one of the most cultivated vegetables across the world - easy growing and delicious, they are found in almost every cuisine.

Selective breeding across many cultures has cultivated Brassica oleracea to produce several vegetable varieties that might not seem related - such as collards and kale, Chinese broccoli, cauliflower, Romanesco broccoli, Brussels sprouts, and conventional broccoli.

Rapini is also popular in the Galicia region of northwestern Spain; a rapini festival called Feira do grelo is held in the Galician town of As Pontes every February.

As mentioned above, Brassica rapa has what is politely termed a "complicated" history. The Italians claim it originated in Italy, while the Chinese and several Asian cultures claim it as their own.

This is why you'll see mentions of both Italian and Chinese origins in the same sentence.

However, in June of 2021, Molecular Biology and Evolution published research from an unprecedented study of the Brassica rapa family that pulled genetic sequencing, environmental modeling, and the largest number of wild, feral, and cultivated samples ever collected to try and understand where this unique species truly originated.

Ancient Indian and Chinese texts mention Brassica rapa crops dating to nearly 3,000 years ago, while genetic analysis of hundreds of samples dates the start of domestication to somewhere between 4,000 and 6,000 years ago.

The center for the original domestication of wild Brassica rapa was likely in a narrow, mountainous stretch of the Hindu Kush, encompassing parts of today's Pakistan, Afghanistan, and India, which then spread east and west, most likely by way of trading routes.

Over the long period of domestication, different cultures chose to select for certain traits in different parts of the same plant. For example, the root became the turnip, the leaves tatsoi, and the flowers are broccoli raab.

Much of the broccoli rabe we know in the United States descended from wild mustard plants from southern Italy. The D'Arrigo brothers, founders of the Andy Boy brand of vegetables and a major supermarket supplier of broccoli rabe, brought their seeds from Sicily.

The leaves, stems, and flower heads are cooked and eaten just like regular broccoli - broiled, stir-fried, braised, roasted, sautéed, or grilled beforehand to mellow the sharpness just a bit.

A highly popular and delicious dish is to boil for 5-6 minutes until very tender, then sauté in olive oil, garlic & chili flakes, then tossed with small pulled chunks of Italian bread and a little bit of pasta water & lots of Pecorino Romano Cheese, salt & pepper.

Broccoli raab seeds planted during warmer weather can have a touch of bitterness, often described as pungent or sharp. Some would describe the bitterness factor as more than just "a touch," but that completely changes with a short blanch in boiling water, roasting, stir- or pan-frying.

Overwintered broccoli raab is sometimes sold in early spring markets and sells out quickly because of its sweet flavor. They aren't as large and leafy as the warmer weather broccoli rabe, but the leaves, stems, and floret stalks are super-tender. It's planted in the fall, often in September, before the first frost, and harvested in March or April.

Broccoli raab grown in the fall and winter works hard not to freeze, so it converts stored starch into sugar which is pushed up into the leaves and stems because sugar freezes at a much lower temperature than normal plant sap. This plant sugar makes broccoli raab noticeably sweet in early spring.

MSRP:
Now: $3.30
Was:
Purple Top Globe Turnip Purple Top turnips grow larger than many other varieties, making them an excellent choice for a home gardener with limited space. The tops develop their characteristic...