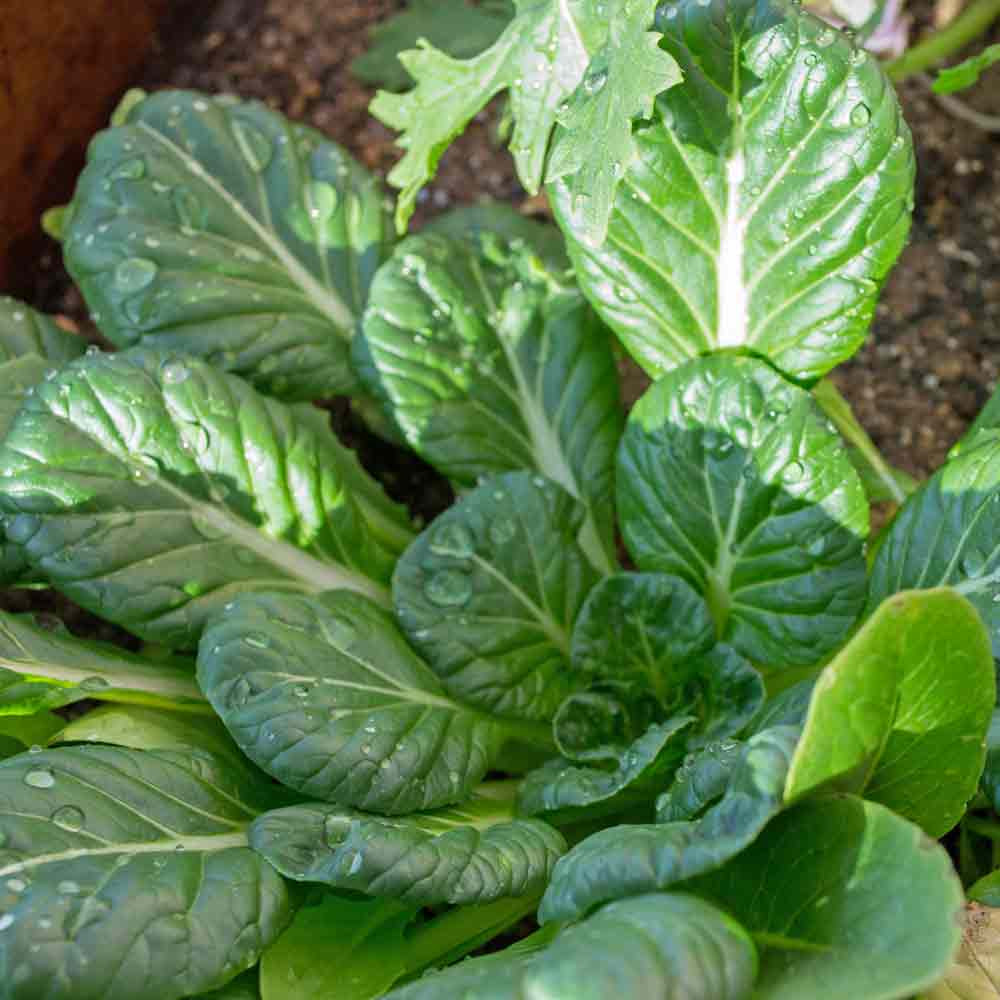 Very cold tolerant and prolific, tatsoi leaves are crunchy and tender with a mild mustard flavor and tangy, peppery notes adding interest to cool-weather salads. The spoon-shaped leaves with crisp stalks are visually intriguing, making it friendly in a number of cuisines and dishes.

Botanically it’s related to Chinese cabbage, but like the offbeat, cool cousin.

Tatsoi is indigenous to China, where it has been grown since at least 500 AD and has been treasured in Japan for centuries. In recent decades it has become well-known and grown around the world.

Tatsoi (pronounced tat-SOY) grows dense rosettes of broad, dark-green, thick spoon-shaped leaves. The crunchy, mild mustard-flavored green is a popular Asian cooking staple, excellent for salads, stir fry or anywhere spinach is used. Once you get to know it, tatsoi will quickly become one of the most versatile cool-weather greens you’ll grow.

Flavor is superior to Bok Choy, and it can be harvested at almost any stage of its growth but is often used as cut-and-come-again baby greens. Use tatsoi as you’d use spinach, fresh, steamed, sauteed, braised or stir fried. Lightly wilt the leaves, then dress with a warm dressing or add to a cold-weather soup at the end of cooking.

Fresh leaves can be harvested under a cover of snow! In warmer conditions, the rosettes grow upright, while in colder climates they grow almost flattened to the ground. Tatsoi is a vigorous grower, germinating quickly. The Japanese say seedlings develop so rapidly you can almost see them grow.

Plants can be harvested within 3-4 weeks of sowing. Tatsoi thrives in fertile nitrogen-rich soil, warm days and cool nights, though it will adapt to loamy and sandy soils.

MSRP:
Now: $3.30
Was:
Purple Top Globe Turnip Purple Top turnips grow larger than many other varieties, making them an excellent choice for a home gardener with limited space. The tops develop their characteristic...

MSRP:
Now: $3.30
Was:
Raab/Rapini Broccoli Raab is from the "Cima di Rapa" strain that makes small heads or shoots with lots of edible leaves and is very popular throughout Italy, especially in the South. Also...

MSRP:
Now: $3.30
Was:
Seven Top Turnip The best variety for masses of fine-flavored, old-fashioned, turnip greens. Produces consistently for a long period. Grown as a winter annual for spring greens. History One...

MSRP:
Now: $3.30
Was:
Corn Salad/Lamb's Lettuce/Mache  A small plant with a rosette of rounded leaves with a unique, nutty, delicate, buttery flavor.  Quick growing, sow in early spring or late fall. It...

MSRP:
Now: $3.30
Was:
Rocket Arugula - Make Your Salad Rock! A great cut and come again plant, this annual adds a refreshing tangy spiciness to salads and sauces. Rocket Arugula is also known as "rocket salad" or...

MSRP:
Now: $3.30
Was:
Red Russian Kale An uncommon, old European variety, Red Russian is quite different from either of the more common curly and Tuscan varieties. The base color is a blue-green with brighter purple...