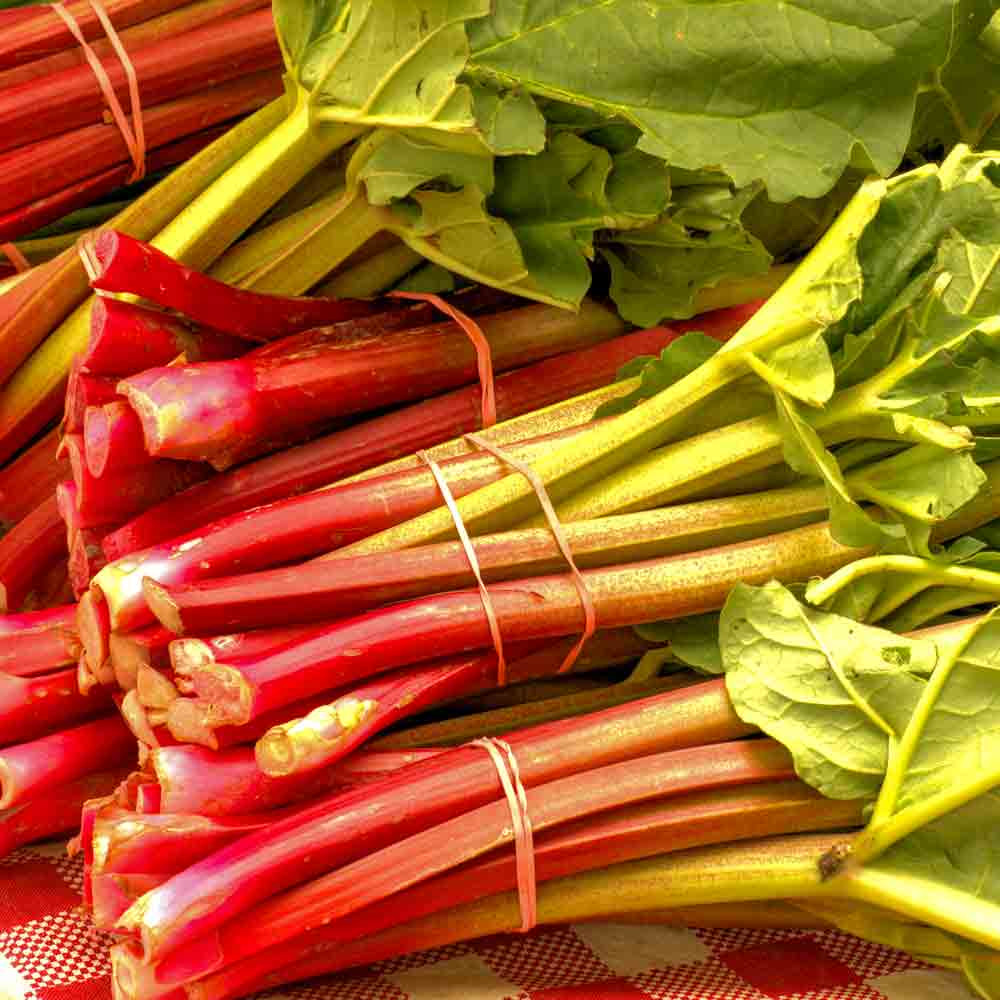 Large, fat, brightly colored stems that are non stringy with a tart, apple-gooseberry flavor followed by a hint of citrus. This cold-hardy perennial vegetable is a heavy producer, easy to grow from seed and few pests bother it. The leaves and roots produce oxalic acid that keeps pests and predators away.

Normally blooms in late May and early June, but in some climates will bloom into summer.

Plant at least 4' apart so stalks are not crowded, the stems can be long and the leaves large, so give it room. When harvesting pull the entire stem away from the crown, do not cut. Pulling the stem's base allows room for more stalks to grow, while cutting the stem leaves a stump which is an opening for disease or pests to enter. Mulch well and keep watered in the heat, or plant in a semi-shaded spot in warmer climates.

Introduced in 1837 by Joseph Myatt in Deptford, England and named in honor of Queen Victoria, this cultivar put rhubarb on the dessert map. According to many gardeners and chefs, Victoria Rhubarb has not been surpassed or improved since its introduction.

The leaves are inedible, but the stalks are tasty and nutritious after cooking. Rhubarb is low in calories but high in calcium, potassium, along with many vitamins and minerals. Chefs are using cooked rhubarb juice as an intriguing, flavorful alternative to lemon juice in many dishes and drinks. Highly adaptable to a variety of dishes, it is used in everything from jams, fruit tarts, soups, sauces, to flavor ice cream and even an Iranian lamb dish.

Soil fertility will determine the size and flavor of the rhubarb, with richer soil giving better and stronger growth along with richer flavors.

MSRP:
Now: $3.30
Was:
Fragrant Flower Mix This seed mix has been carefully hand-selected with both annual and perennial flowers for a painter’s palette full of gorgeous colors with lovely, captivating fragrances...

MSRP:
Now: $23.75
Was:
Salsa Seed Collection Strictly speaking, salsa simply means sauce in Spanish. Today we think of it as the magically addictive combination of tomatoes, chiles, onion, garlic, and spices that we...