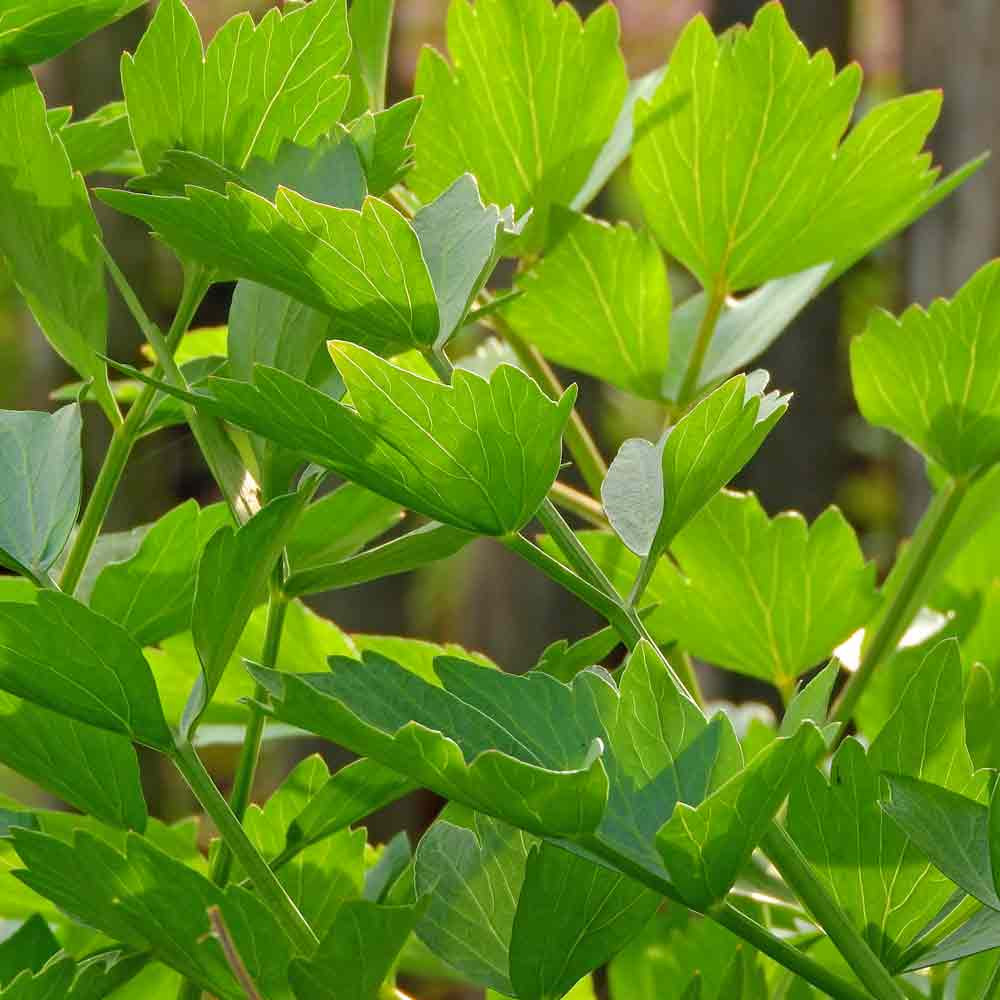 Lovage - The Love Parsley of the Ancient World

This tall, dark and handsome herbaceous plant is perennial from Zones 3-9 and is one of the first up in the spring in most areas. Loaded with vitamins A and C, its leaves and stems taste like a supercharged mix of celery and parsley. Today the leaves are used as both a culinary herb and vegetable, the roots as a vegetable, and the seeds as a spice.

Beloved by the ancient Greeks who chewed the leaves for digestion and used as an herbal remedy for centuries, lovage came to America with the early settlers. New Englanders chewed the seeds to keep alert during long church services.

Lovage can grow to 6 ft. with dark green and shiny leaves that look much like carrot tops but are wider like celery leaves. It grows best started in late Summer, with seedlings transplanted in late Fall or very early the next Spring. Very prolific, usually only one plant is needed to supply a family with seasonings and leaves.

Grows just about anywhere except very dry and sunny spots. Its height makes it an ideal background border plant, where its copious blossoms attract a variety of pollinators into your garden. Needs fertile soil for best production, aroma, and flavor. Amend soil with rich compost or liquid fish emulsion.

Considered to be native to the Balkans and Mediterranean, lovage was introduced to Europe and Britain by the Romans, as it was one of the most prominent flavors in their cuisine.

If you were to walk into almost any historical kitchen garden from ancient Greece to the medieval era, lovage would be at the back being used as an herb, a vegetable, and a spice.

It is variously called Garden Lovage, Bladder seed, and Love Parsley. The latter name arose from the belief that it has aphrodisiac properties.

The flavor is described as an intensely flavored mix of celery and parsley, but growing better than either one. Leaves were very popular as a salad green before celery became commonly available.

All parts of the plant are both edible and delicious. Chop the leaves and add them to any dish that calls for celery – either fresh or cooked, including salads, sandwiches, stews, frittatas, egg salad, and potato salad. The flavor is stronger than celery, so adjust the amount accordingly. Eastern European cooks prefer the flavor of lovage in their broths over parsley or dill.

The roots are grated into salads like carrots, or cooked and used as a root vegetable, being especially hearty after oven roasting. Seeds are used as a spice and chewed as a digestif, similar to fennel seeds. Europeans lightly saute it as a green vegetable, and the seeds are used to flavor baked goods.

Plan ahead, as it can live for up to 20 years in ideal conditions! Divide roots every fourth year when shoots appear.

MSRP:
Now: $23.90
Was:
Salad Bar Seed Collection - Grow The Best Salad You'll Ever Have A good mixed salad is appealing to both the eyes and taste buds, satisfying your appetite with great nutrition. Great salads have a...

MSRP:
Now: $3.30
Was:
Rampion - Shakespeare’s Salad Greens Rampion – sometimes called ramps in Europe where they are native – is one of the earliest wild edibles to emerge in spring. It is a...