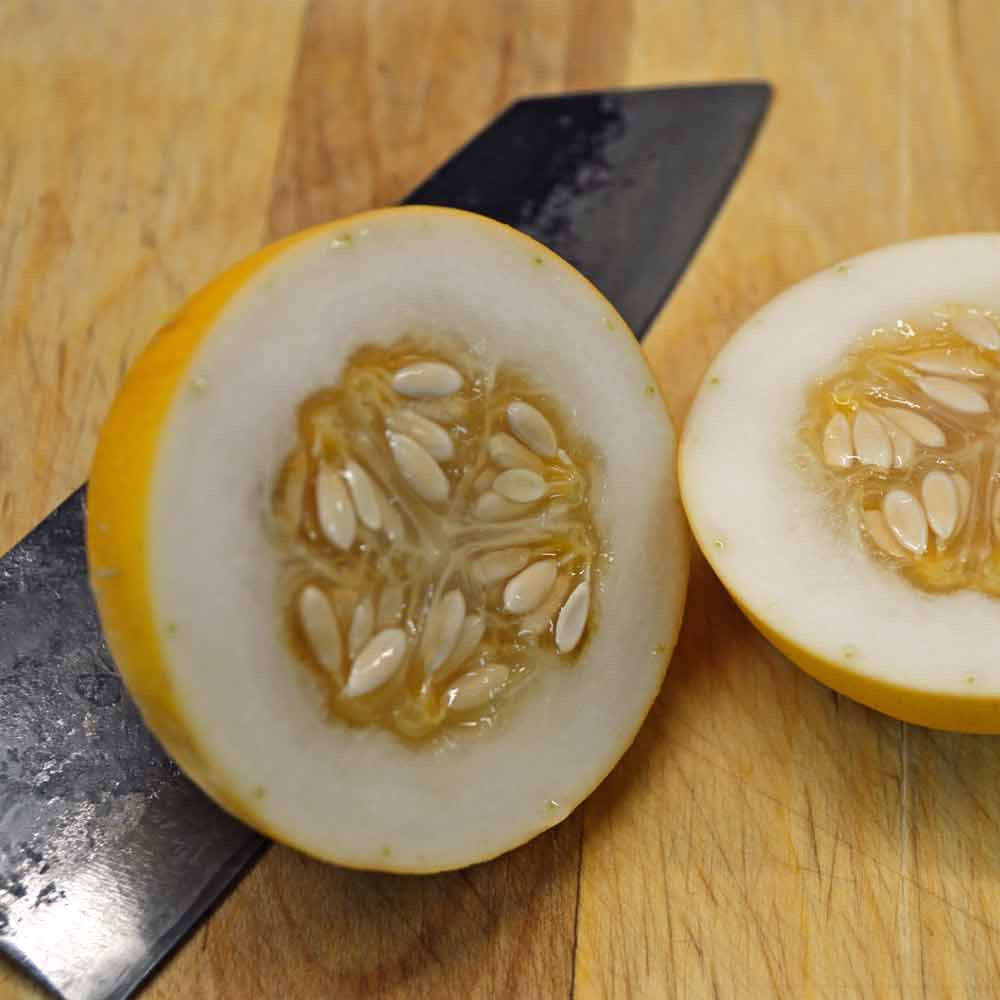 A drought-tolerant annual whose fruits are peach-sized and colored, and mango-like in flavor and texture. Often mistaken for their kissing cousins – the inedible Queen Anne’s Pocket Melon – a couple of vine peaches in a bowl will perfume the room with their namesake scent – peaches and mangoes.

There is some discussion as to how they arrived in America, as William Woys Weaver shows Samuel Wilson, a seedsman in Mechanicsville (Bucks County), Pennsylvania, offered seed in the Farm Journal in February of 1889. Another source shows they were first describe in 1849 by Charles François Antoine Morren, a Belgian botanist and horticulturist, as well as the Director of the Jardin botanique de l’Université de Liège in the early to mid-1800s. He apparently obtained his trial seed from Cuba and brought them to Belgium for study. The vine peach became a well-known commercial variety in Europe soon after, where it might have come to America. Regardless of how vine peach arrived, in the early 20th century it was being commercially grown for pickled foods and preserves.

While tasty raw, they excel canned or cooked into pies, preserves, conserves and pickles (for pickles, pick while still green).

Melon seeds dislike cold soil. It's better to wait until the soil is warm to plant the seeds.  Melons do not ripen much off the vine so it is important to pick them when they are ready. Ripe melons “slip” from the vine with light pressure.

MSRP:
Now: $3.30
Was:
Armenian Pale Green Cucumber - The Burp-less Wonder The Armenian is known as the Burp-less Cucumber. Light-green, heavily ribbed, 3-4” in diameter, best to harvest at 12-18” long, mild flavor,...

MSRP:
Now: $3.30
Was:
Charentais Melon – French Melon Adored Above all Others A true French heirloom cantaloupe from the Poitou-Charentes region of western France, this is the melon to fall in love with, or over. Mostly...