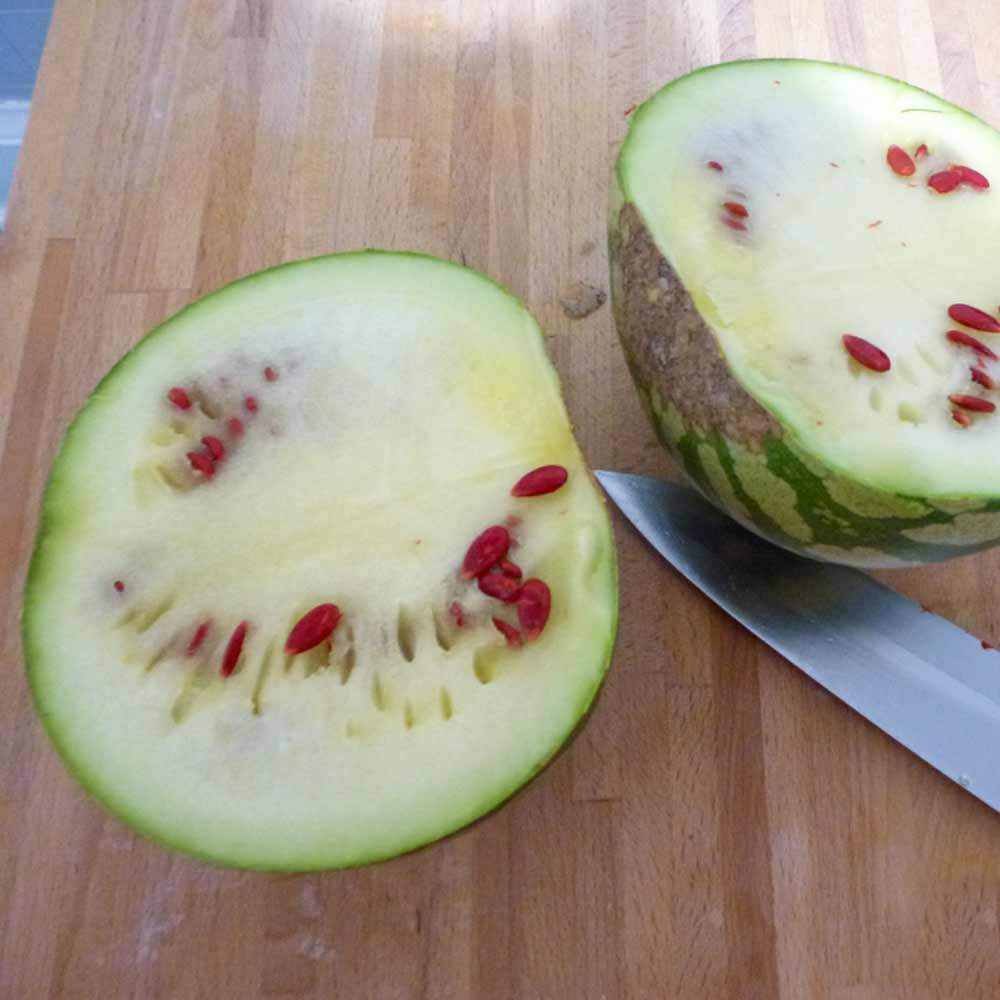 This ancestor to our modern watermelon goes by several names that hint at its best uses - jam melon, preserve melon, or pie melon. At first glance, the Red Seeded Citron melon (Citrullus lanatus) looks like a small, round watermelon, but when cut into you'll find a pale green to white, dense crunchy flesh dotted with shocking red seeds scattered throughout with a very mild to almost absent flavor. Sometimes people taste a young, not-quite-ripe honeydew, others taste cucumber, and still others taste young pumpkin.

The lack of flavor from a fresh-picked fruit might surprise you, especially since it looks so much like the beloved watermelon. The real value of citron melon isn't the fresh taste, but in what it can do for jams, jellies, marmalades, preserves, and pickles. Citron melons have naturally high concentrations of pectin, the traditional gelling agent for jams, jellies, and marmalades, as well as fruit pies and cobblers. The high pectin content makes them perfect for candied fruit for fruitcakes and desserts. After cooking, citron melon's natural flavors become more apparent.

Because of their exceptionally hard rinds, melons can be harvested in late fall and some kept aside in a cool place until just after Christmas, to be made into the last citron melon preserves of the year.

Seed germination is strong and production is quite prolific - 50 melons from a single large, sprawling plant is not uncommon. The French prune the first half-dozen flowers, then let the next set pollinate for however many melons are needed, then the rest of the flowers are also pruned. This prevents being overrun by melons!

It is native to Africa and thought to have originated in the Kalahari desert - where it still grows abundantly today. Called Tsamma melon in its native range, it has been in use and in cultivation for at least 4,000 years. Recognizable watermelons were portrayed in Egyptian paintings from as early as 3100-2180 BC and seeds were found in the tomb of King Tutankhamun (ca. 1330 BC). Murals and mosaics portray watermelons at locations around the Mediterranean from the Roman era (510 BC to about 410 AD) and in southern European medieval herbals (AD 1200-1500). They traveled through trade to India by 800 AD, and to China in 1100 AD. They were in Cordoba by 961 AD and Seville in 1158 AD. They came to the New World with the Spanish in the mid to late 1500s.

The French have long since figured out the easiest and most delicious way to work with what they call 'melons d'Espagne' - translating as Spanish melons, but meaning 'jam melons'. In the Médoc region of France, just north of Bordeaux, these melons are widely grown solely to make fruit confitures or fruit preserves after harvesting in early November.

In fact, locally crafted sweet preserves made with 'jam melons' are highly valued - it is an honor to receive a jar of citron preserve from outside the family.

Citron melons create the most delicious homemade jams after peeling the melon rind, de-seeding and chopping. Vanilla and sugar are added to a bowl of chopped citron melon; or ginger, lemon, mandarin, melon, and sugar as another option. Left overnight to soak and mingle the flavors, they turn into a syrupy fruit mash that is gently simmered for about 45 minutes, turning a gorgeous translucent yellow and filling the house with the scent of sugar and spices.

Add melon chunks, lemon slices, and ginger slices to a large bowl and mix well. Add sugar and mix again. Cover with cling film and let set overnight to macerate.
The next morning, cook on low heat, stirring every few minutes, for about 40 - 45 minutes, or until the consistency is thick and glossy. Pour jam into sterilized glass jars and leave to cool before closing.
Be careful not to overcook, as the jam will become stiff and pasty.

As you might expect from a melon that grows exceptionally well in the Sahara and is used as a water source during droughts, citron melon is hardy - shrugging off the heat and dry conditions with aplomb. Despite this, better flavor results from moderate moisture during seedling growth and after flowering when the fruits are growing. Harvest the fruit when the vine starts to die back.

MSRP:
Now: $3.45
Was:
Moon and Stars Watermelon - Out of This World Sweet, pinkish red flesh with that old-time watermelon flavor. Large silver dollar to pea-sized moons on dark green and yellow speckled slightly...

MSRP:
Now: $3.65
Was:
Turkish Watermelon - Çekirdegi Oyali  Flavor, productivity and the most uncommon seeds you’ve ever seen are the hallmarks of this beloved watermelon from Turkey. The exact origins of this old...

MSRP:
Now: $3.45
Was:
Moon and Stars Watermelon - Out of This World Sweet, pinkish red flesh with that old-time watermelon flavor. Large silver dollar to pea-sized moons on dark green and yellow speckled slightly...

MSRP:
Now: $3.65
Was:
Turkish Watermelon - Çekirdegi Oyali  Flavor, productivity and the most uncommon seeds you’ve ever seen are the hallmarks of this beloved watermelon from Turkey. The exact origins...