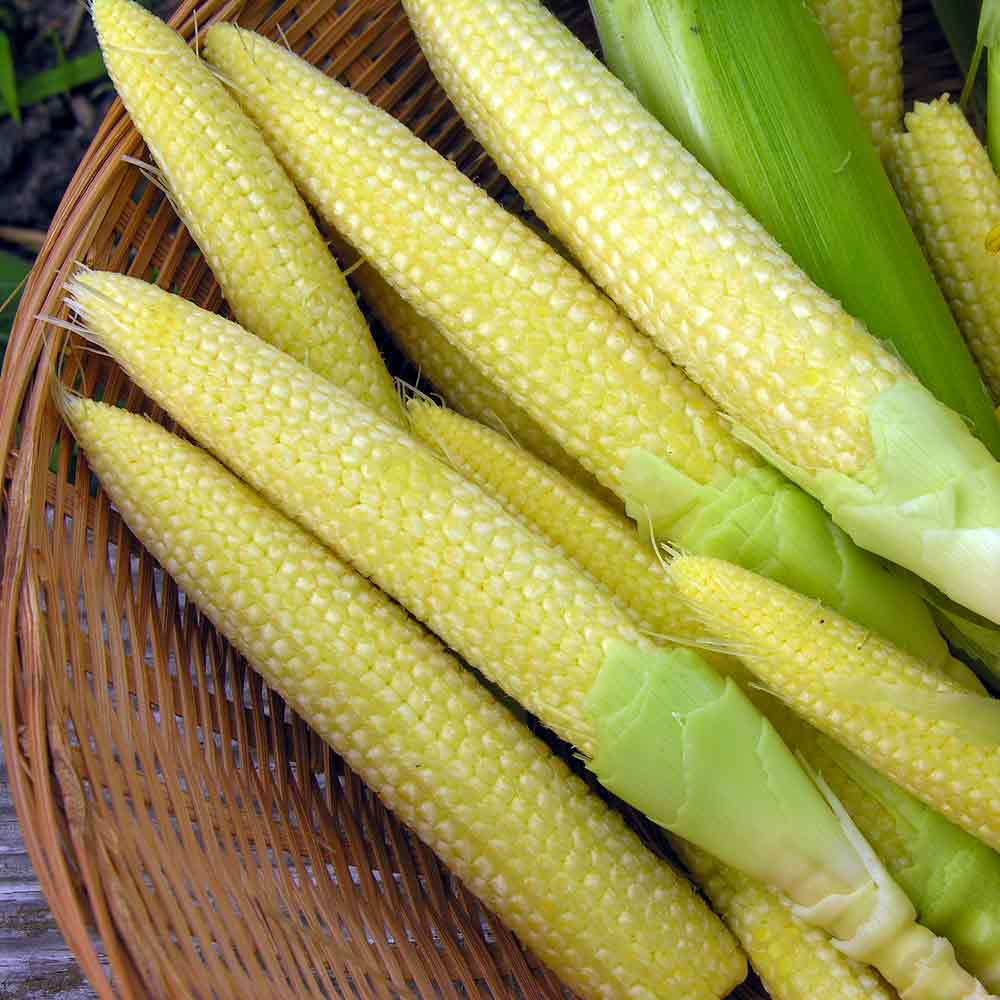 Baby Corn - Put Baby Front and Center in Your Garden

Baby corn - also known as young corn, mini corn, or candle corn - is delicious - perfectly suited for the home gardener. Freshly harvested, the tender, succulent, finger-like ears have a snappy crunch, followed by a mild, subtly sweet taste. Baby corn is mostly used to add texture and visual interest, providing a satisfying crunch without altering the flavors of a dish.

Unlike mature corn, ears are entirely edible, delicious for hors d'oeuvres, stir-fries, and pickles, and are often the visual centerpiece of many Asian dishes.

Baby corn is not commercially grown in the United States due to the hands-on work needed, but it excels in home gardens and small-scale farms because it doesn't need as much space or time for production.

We are one of the few seed companies that offer baby corn seed grown and selected specifically for baby corn production. The seed is physically smaller, and the plants produce more ears per plant than other corn varieties. Plants can be spaced closer together, so less room is needed in the garden, and harvest is earlier, allowing a second crop to grow in the same space.

Baby corn is harvested small, when it is around 1/2" in diameter and 1 1/2" to 3" long. The ears are straight and cylindrical, tapering towards the tip. Tiny developing kernels cover the cob in straight rows and are pale yellow to cream color.

The most recent archaeological research into corn in 2009 shows the earliest known domestication and selection of what would become what we recognize as corn in the Balsas region of Mexico - southwest of Mexico City - about 8,700 years ago.

Christopher Columbus documented the first European introduction of corn into Spain in 1493. From there, corn was brought to the Vatican and was rapidly spread soon after. German herbalist Bock reported corn growing in German in 1539, stating it was grown "in all gardens, almost everywhere".

Baby corn was first seen in the late Victorian era when baby vegetables became extremely popular as a food category, evoking the perceived innocence and virtues of pre-Industrial Europe. There was even a poem to baby corn, published in 1899 where the mother plant "put in each small mouth / A hollow thread of silk, / Thru which the sun and rain and air / Provided baby's milk."

The next chapter of baby corn occurred in the late 1960s with the new cuisine of the French, when chefs adopted baby vegetables, lightly cooked and served with their tops and roots intact showcased the new ideas of small, fresh, and light cuisine.

Alice Waters folded the new cuisine ideas of the French into a New American style of food, where at Chez Panisse baby vegetables were openly celebrated. Soon after, European vegetables including baby vegetables arrived in force with baby chervil, baby arugula, baby chicory, and the whole mesclun mix of baby greens from Provence.

Baby Corn is incredibly versatile, pairing well with almost every other vegetable or spice, and shines in light dishes as well as in spicy and heavily-spiced ones. It is particularly popular in Thai and Chinese cooking.

Fresh Baby corn adds crunch to any salad and can partner with creamy dips as an intriguing appetizer. Toss the tiny fresh cobs into soups, curries, and stews, mix into rice or noodle dishes, or stir-fry with other vegetables and meat as a fresh entrée. Baby corn adds crunch and texture to dishes, and the tiny kernels catch sauces for depth of flavor.

Freshly harvested Baby corn will keep for 3 to 4 days in the refrigerator.

Save space in your garden by planting baby corn seed much closer together than usual. Sow each seed about 4 inches apart down the row, keeping row spacing normal at 30" to 36" apart.

Baby corn has fewer pest problems than full-sized ears of corn because earworms and cucumber beetles generally do their damage later when the corn ear is filling out and maturing.

Baby corn is usually ready for harvest 45 to 50 days after sprouting when it is around 1/2" in diameter and 1 1/2" to 3" long. Finding the perfect time to harvest can take a little practice to learn exactly when the baby corn is at the perfect stage.

Start by harvesting a couple of ears when the silk appears that day, then adjust your harvest time to get the size and crunch of ears you want. Many gardeners find that a day or two after the corn silks appear is right for them. Each ear will mature at different rates on different plants, so check them in the morning and again in the evening to get the perfect baby corn. One stand of baby corn will yield several ears each day.

If you aren't going to use the baby corn immediately, refrigerate the ears with the husks on to help them keep better, but use them before 4 days of storage for the best flavor and texture.

MSRP:
Now: $3.30
Was:
Red Corn Poppy - The Remembrance Poppy A deep, almost blood red poppy with plants that grow 12 – 30" tall and are very attractive to pollinators. Direct sow in early to late spring for a...