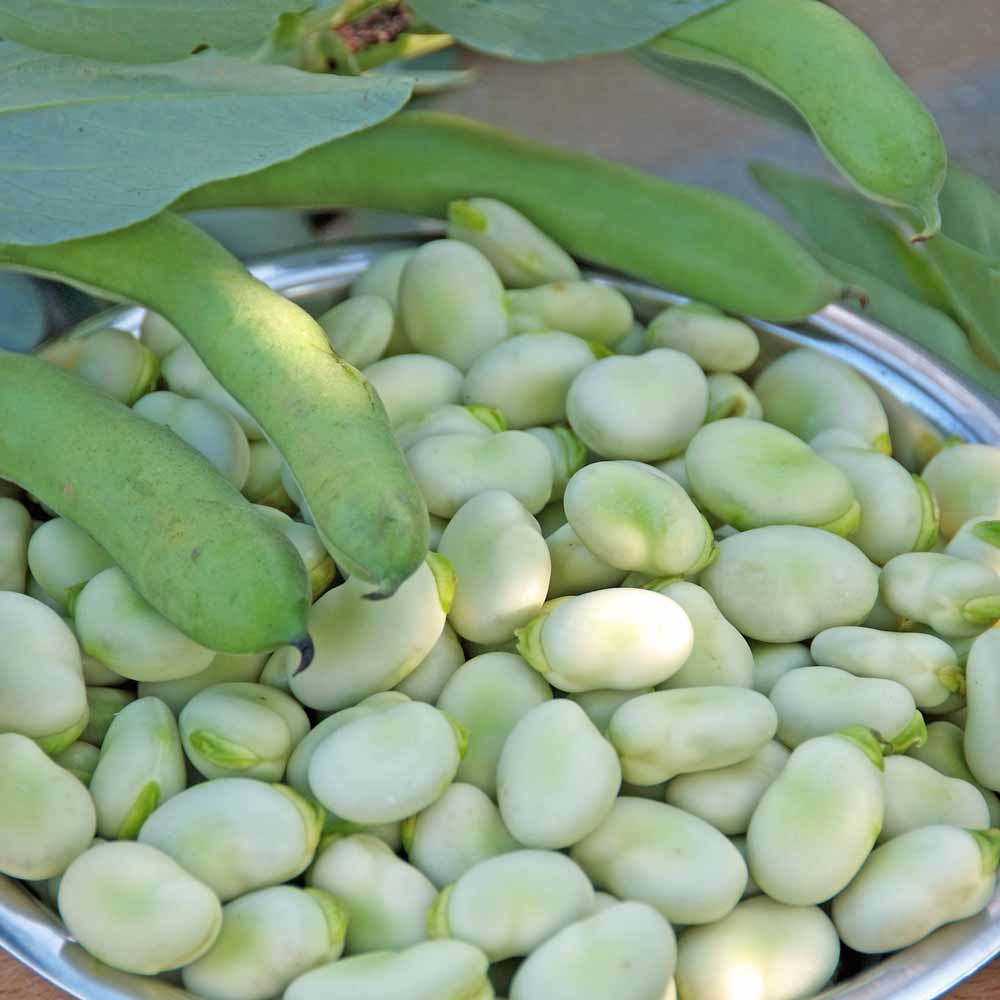 One of the tastiest and largest of garden beans - often the size of a quarter - and perennially popular, especially in European kitchen gardens. Broad Windsor fava is an ancient legume, grown for thousands of years, making it a classic ingredient in rustic Italian dishes. Eaten at the smaller, tender shelling stage, their mild flavor is the essence of a classic blank canvas, partnering perfectly with many spices and herbs.

Favas are easy to grow and germinate quickly, thriving in colder weather while tolerating shade, making them perfect for early spring and fall plantings. They grow into sturdy bushes standing 4’ tall, produce 4-5” pods with large 1” beans, and are reliably hardy to about 12°F.

Fava beans, also called faba beans or broad beans, are not actually a true bean but more closely related to vetch, a common cover and forage crop. Evidence of fava bean cultivation date back to at least 6000BC, with Egyptians using them in many traditional dishes and offerings to their gods. Pharaoh Rameses III offered jars of fava beans to the god of the Nile.  Their hardiness and cold tolerance contributed to their adoption as an essential food crop, along with lentils, peas, and chickpeas they became part of the ancient eastern Mediterranean diet.

A serious drought in Sicily during the Middle Ages led to widespread crop failure and hunger, but fava beans were the only crops to survive the drought, growing readily after prayers to Saint Joseph brought a miracle of rain showers. Ever since, Sicilians honor St. Joseph annually on March 19th by placing fava beans on church altars and using them in their feasts. The beans are traditionally planted on All Souls Day, November 2nd.

Grown worldwide today, favas are an integral part of the cultural cuisine of almost every country.

As an edible bean in the young stage – using the entire pod like a green bean when the beans are very small, or as a green shelling bean, or when mature as a dried bean that is soaked, cooked and peeled before using in a dish. A delightful way to avoid peeling is to roast larger favas whole, coated with olive oil and sprinkled with salt. They make a great snack hot from the oven, eaten with your fingers, sucking the bean from the skin.

As a nitrogen replenishing cover crop in fall and early spring. Edible pods and beans can be harvested, allowing the plant to re-grow as a cover crop.

Fava beans germinate quickly, tolerate shade and thrive in cooler temperatures, making them a perfect early spring and fall choice for both an edible crop and a cover crop.

As a cool-season crop, favas should not be planted in summer with dry, hot weather. Temperatures of 80° F or more slow or prevent flowers and seed pods from setting. The ideal temperatures for fava beans range from 60 to 65° F.

Soaking the beans for a few hours helps speed up germination - sprouts usually appear within the first week, growing into 6” seedlings in two weeks. Sow about 6” apart and 1” deep.

They grow well in cool soil, but it shouldn’t be waterlogged. Adding extra organic matter like well-aged compost increases available nitrogen to get the growth started vigorously.

Pinch out the growing tip or cut off the top stem and two sets of leaves once the beans start setting. This gives you an earlier harvest and keeps the plants open to airflow and sunshine, helping prevent fungus diseases and insect problems.

For Snap Beans, wait until they are about pencil size, but harvest before the beans inside the pods become lumpy. Snap beans, are snapped, strings removed and eaten fresh or cooked.

For Fresh Shell Beans, let the seeds in the pods get good and fat. You shell/remove the green beans from the pod and they are eaten fresh or cooked.

For Dried Beans, let the pods get brown and dry on the plant. Pick them before they can split open and spread out to finish drying. Remove from dried pods and store. Dried beans are usually soaked and cooked.

After harvesting the beans, prune the plants down to about 6” tall, encouraging new growth and a possible second harvest, especially in milder climates. After the spring harvest, cut the stems down to the soil but leave the roots to rot, releasing nitrogen and organic material into the soil for the upcoming growing season.

MSRP:
Now: $3.50
Was:
Anasazi Bush Bean - Sweet and Nutty  The Anasazi Bean is a beautiful maroon and white bean, similar to Jacob's cattle bean. Identified as one of the few cultivated crops grown by the...

MSRP:
Now: $3.50
Was:
Lazy Housewife Pole Bean  Completely string-less beans. Brought to America by German immigrants and first listed in W. Atlee Burpee’s 1888 catalog. These beans were so-named because they were...

MSRP:
Now: $4.15
Was:
Mung Bean Sprouting Seeds Organic Mung Bean Sprouts are the most-grown and consumed sprout in Asian countries, as they are used widely in Asian cooking. You can grow them smaller with a more...

MSRP:
Now: $3.50
Was:
Anasazi Bush Bean - Sweet and Nutty  The Anasazi Bean is a beautiful maroon and white bean, similar to Jacob's cattle bean. Identified as one of the few cultivated crops grown by the...

MSRP:
Now: $3.35
Was:
Alaska Pea - Earliest Pea The Alaska pea was originally known as "Earliest of All" in England where it was bred to be extremely early by Thomas Laxton around 1883. It was renamed Alaska when...

MSRP:
Now: $3.50
Was:
Lazy Housewife Pole Bean  Completely string-less beans. Brought to America by German immigrants and first listed in W. Atlee Burpee’s 1888 catalog. These beans were so-named because they...