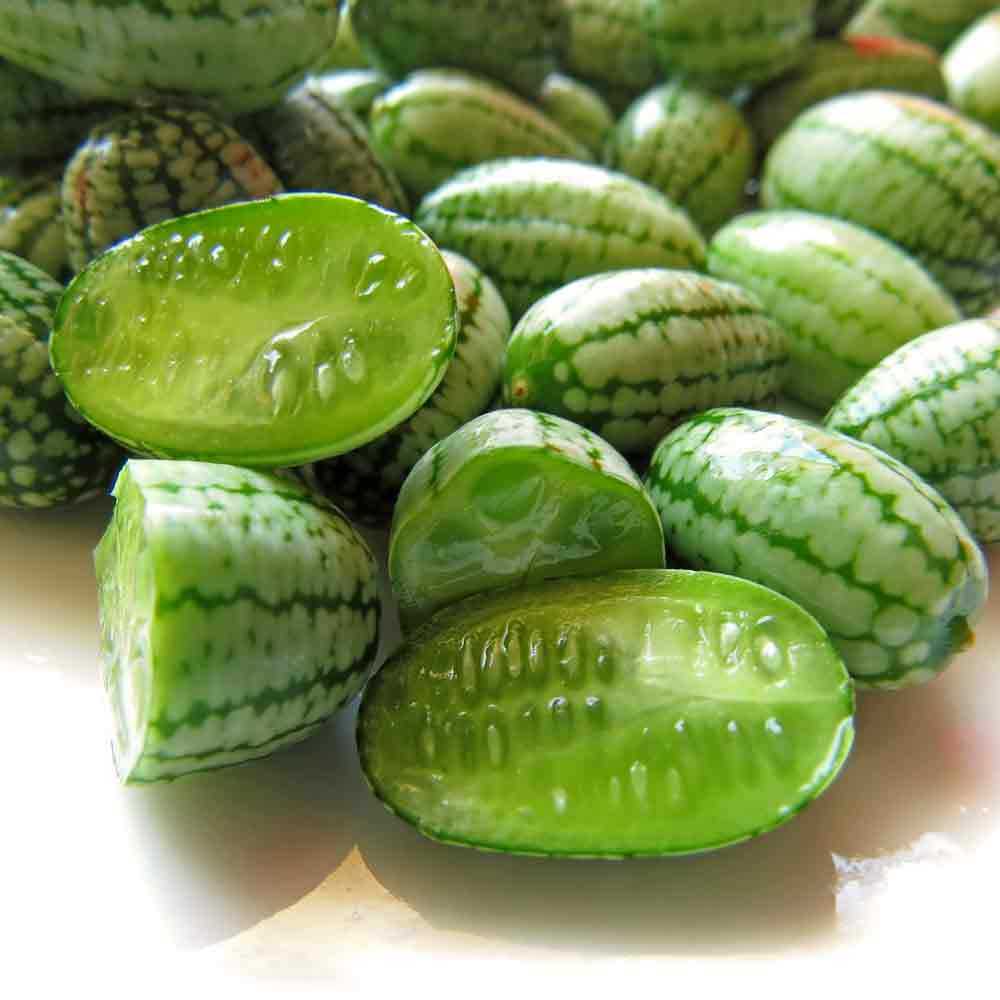 Looking like perfect Lilliputian watermelons for a dollhouse, Cucamelon is a tiny tangy bite-sized treasure that easily matches the crunch of pretzels or chips. When mature, the 1" long light-green tiny watermelon-like fruit has a white, crisp, and crunchy flesh with a slight lemony tartness.

Its unique flavors, rampant and pest-free growth coupled with an almost embarrassing productivity have made this ancient vining vegetable a darling of home gardeners and chefs alike.

Cucamelon is an excellent conversation piece in the garden, or as an edible centerpiece at the table. The vine is attractive and productive enough for hanging baskets. Also known as the Mexican Sour Gherkin or Mexican Sour Cucumber because the fruit becomes sour when overripe, mouse melon, or "Sandita" (little watermelon in Spanish).

One person described them as, "Cucumber with a bit of watermelon rind and a squeeze of lemon juice."

Check out the short video in the video tab above from James Wong - English botanist, BBC personality, and "obsessive foodie grower" on the cucamelon from Sutton's Seeds in England. On a side note, we provided seed to Sutton's for the initial grow-out!

The first European description was by French botanist Charles Victor Naudin in 1866.

The name of Melothria scabra is descriptive of the fruit – Melothria is from ancient Greek mēlothrōn meaning "kind of white grape", referring to the small grape-like fruit. The common name of cucamelon was coined in the 1980s – a combination of 'cucumber' and 'melon' to better describe the diminutive fruits when introducing them to North American gardeners.

Their uses are only limited by your imagination, as they are excellent in stir-fries, pickled just like French gherkins, sliced in half to top salads while sparking conversation, or chopped and added to salsas. Party cocktails are more engaging when garnished with these miniature watermelons!

Their prolific vining growth makes them a dual-purpose plant, with the leaves shading other sensitive plants while their butter-yellow button-sized flowers bring in loads of smaller pollinators.

Growing cucamelon is exactly like growing cucumbers - plant seed in warm soil, with moderate moisture and provide a trellis for the cucamelon plant to climb.

Blossom set will be delayed in comparison to cucumbers - just when you think there will be no blossoms, you'll walk out to see the vines covered with button-sized yellow blossoms.

In favorable climates, cucamelons produce tubers in the roots that can be overwintered for an earlier and large crop the second year!

MSRP:
Now: $3.30
Was:
Charentais Melon – French Melon Adored Above all Others A true French heirloom cantaloupe from the Poitou-Charentes region of western France, this is the melon to fall in love with, or over...