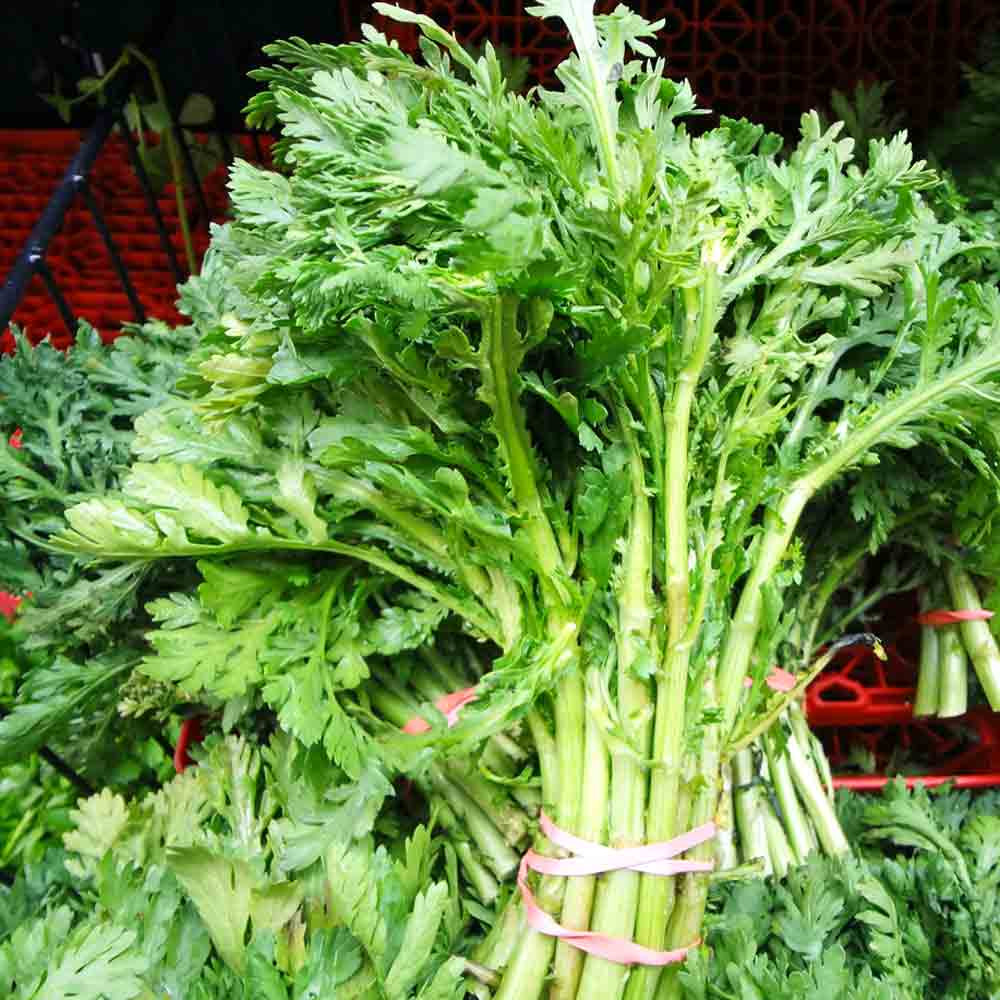 The cheerfully brilliant orange-yellow flowers floating above clouds of deep green foliage may look like simple garden flowers but they conceal an ancient, noble secret.

In ancient China, they were considered to be so exceptional that only the nobility had permission to plant them. They were an essential part of the Taoist immortality elixir and were known as "edible cold medicine" in Chinese medicine.

Japanese call them shungiko (shun-gee-cue) - literally "Spring Chrysanthemum" - both the flowers and leaves are edible, especially the tender shoots that are sweet and slightly crunchy, and the young leaves are tender with a mildly grassy, herbaceous flavor.

Some describe the taste as a citrusy carrot flavor that adds interest and texture to a salad.

Depending on your access to a good Asian market, these greens can be expensive - or impossible - to buy, but they are easy to grow!

Edible chrysanthemum is very easy to grow and prefers cooler weather, making it a great two-season crop in early spring and again in fall for most American gardens. In more temperate areas with a mild winter, it will happily grow during the cooler fall, winter, and early spring seasons.

Deep green serrated foliage supports abundant stalks of brilliant orange-yellow flowers, growing up to 4' tall. Often grown as an ornamental, it attracts loads of pollinators to its bright flowers and has a pleasing herbaceous scent.

It is grown and loved for several uses, including edible leaves and flowers, as a medicinal plant, flower borders, container gardening, flower meadows, and naturalization of an area.

Chrysanthemums were grown as a flowering herb in 15th Century BC China, seen as an honored plant with exceptional qualities. Only noble families were allowed to plant them in their gardens.

The chrysanthemum was introduced to Japan in the 8th Century, where it quickly became the symbol of the Emporer of Japan, gracing the royal seal. The people honored the emperors by covering their seats with its flowers, giving rise to the name Chrysanthemum throne. The highest knighthood is bestowed by the emperor and is called the "Supreme Order of the Chrysanthemum".

Chrysanthemums spread by trade into Europe in the late 17th Century, traveling from France to England and reaching the United States in 1798. The scientific name combines the Greek "chrys" meaning gold colored, indicating the original color of the flowers with "anchemon" meaning flower, thus gold-colored flower.

The leaves are long, thin, and flat, growing in an alternating pattern divided into leaflets with serrated edges, 2-4" long. Young leaves are tender and slightly crunchy with older leaves having a more noticeable bitter bite.

The secret to preparing chrysanthemum greens is to not overcook them. Keep the best flavor and crunch by quick blanching - dunk a handful of leaves in boiling water for 10-15 seconds, then transfer them to a bowl of cool water.

A simple yet favorite Japanese side dish is blanched shungiko greens with a sesame dressing, as the nuttiness of the dressing contrasts nicely with the herbaceousness of the greens.

The dressing uses two sesame ingredients: a spoonful of toasted and ground sesame seeds, as well as a few spoonfuls of tahini (sesame paste). Mirin, soy sauce, and rice vinegar to taste round out the flavors in this classic dressing.

Chrysanthemum leaves are used widely in Korean, Chinese, and Japanese dishes often used to flavor sukiyaki and shabu-shabu, soups, stews, hot pots, and stir-fries. Its special aromatic flavor is used like an herb. Best eaten raw or lightly cooked to keep the texture and nutrients intact.

The edible flowers, both buds and mature flowers, are picked, dried, and used to make a beneficial herbal tea that is a beautiful yellow color with a distinctive aromatic flavor.

Direct sow as soon as the frost has passed, or start transplants inside a month before the last frost date. Seeds usually germinate in 10-18 days in 60°F soil. Can be sown into late fall in mild climates or when overwintering in a high tunnel or other protected structure.

You can begin harvesting shoots and leaves about 5 to 6 weeks after sowing, once the plants are at least 4-6" tall. Harvest young leaves by pinching the plant back by half, making sure to leave at least four leaves to re-grow. New shoots will grow from the base of each leaf at the stem, and these shoots can be harvested when they reach 4-6" long. This creates a very stocky, leafy plant that will keep you in greens through most winters, even down to freezing temperatures.

Succession planting every 3-4 weeks ensures a regular supply of leaves and flowers for the entire season.

MSRP:
Now: $3.30
Was:
Edible Flowers – Colorful and Tasty Our Edible Flower Mix is a colorful and tasty blend of annual and perennial flowers which are all edible. The culinary world is in love with edible flowers, from...

MSRP:
Now: $3.30
Was:
Edible Flowers – Colorful and Tasty Our Edible Flower Mix is a colorful and tasty blend of annual and perennial flowers which are all edible. The culinary world is in love with edible flowers,...