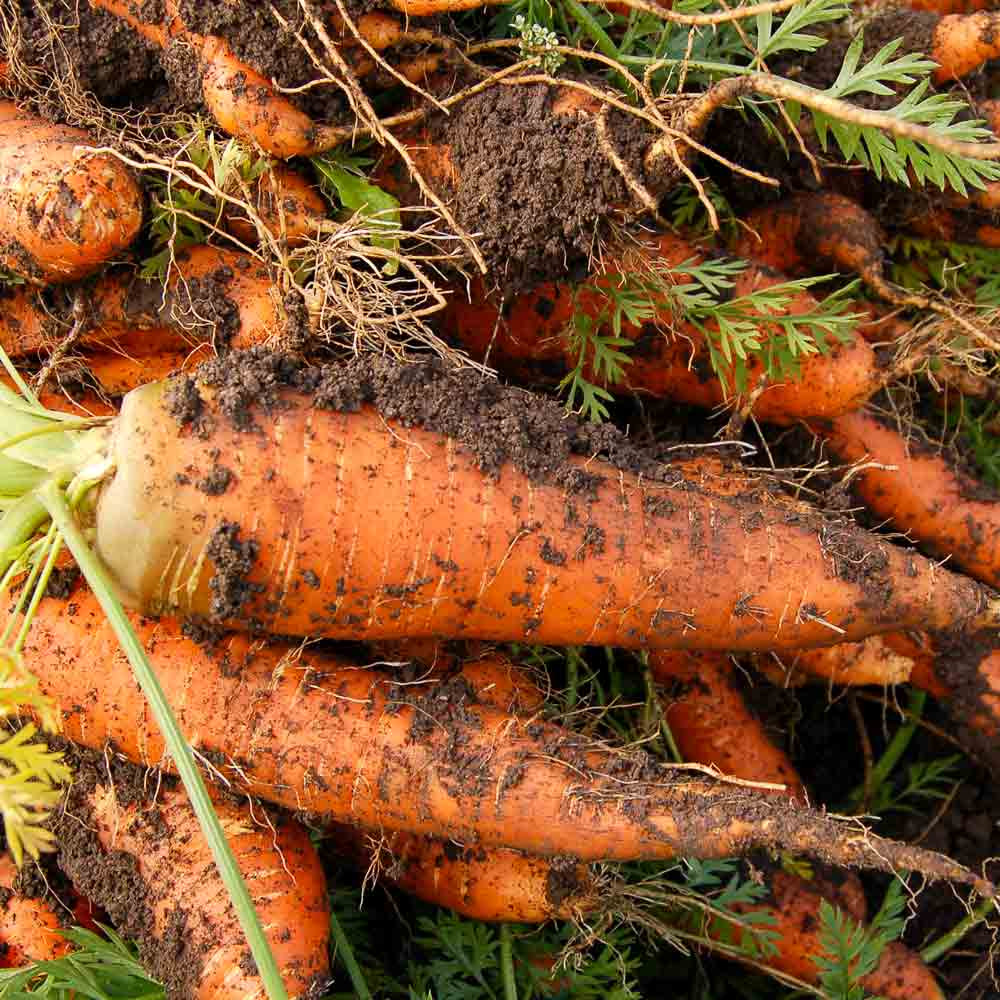 Red Cored Chantenay carrots are crisp, tender, sweet, and crunchy large-bodied roots with deep red-orange color from the skin to the very center. This fine-grained smooth refined carrot was introduced by the French seed company Vilmorin-Andrieux in the late 1800s and quickly became a beloved American heirloom about 1929.

Their dependable high yields, coupled with their signature sweet crunch quickly made them a benchmark for all carrots to be measured against. In fact, Chantenay carrots are still commercially grown for the canned and processed carrot markets.

C. C. Morse described them in their 1931 seed catalog:"The first time you pull this new carrot you will want to eat it then and there. The deep orange-red color and smooth symmetrical shape are combined with just the right size to make it irresistibly appetizing. Its beauty is not merely skin deep; it goes clear through to the very center and the interior is even more tempting than the outside. The yellow ring which is usually found around the core of carrots has been bred out of Red Cored Chantenay and in the breeding a sweeter, richer flavor has been acquired. This flavor alone is enough to establish its superiority and when combined with the crisp, tender quality and deep color of the flesh a new treat is furnished for those who appreciate the healthful and high nutriment value of carrots. On the inside back cover will be found an unretouched photograph of this and other carrots in natural colors."

Sweetens in storage, making it the perfect early Spring or Fall and Winter garden candidate. For table use, canning, juicing, freezing or storage. Heavy producer, even in heavier soils.

MSRP:
Now: $3.30
Was:
Kaleidoscope Baby Carrot Mix - Colors All Around A lovely full-color spectrum of tender, delectable baby carrots. We’ve selected these carrots for their flavor, color and fast growth for both baby...

MSRP:
Now: $3.30
Was:
Parisian Carrot - Sweet Tasty Tidbits Parisian carrots are highly prized among chefs for their natural “baby carrot” size and their bright flavors bursting with sweetness. As with most older...

MSRP:
Now: $3.30
Was:
Nantes Scarlet Carrot - Flavor and a Big Crunch Bright red-orange flesh is crisp, sweet, and delicious with a high sugar content, fine grained with almost no core. Average 6 - 7” long with...