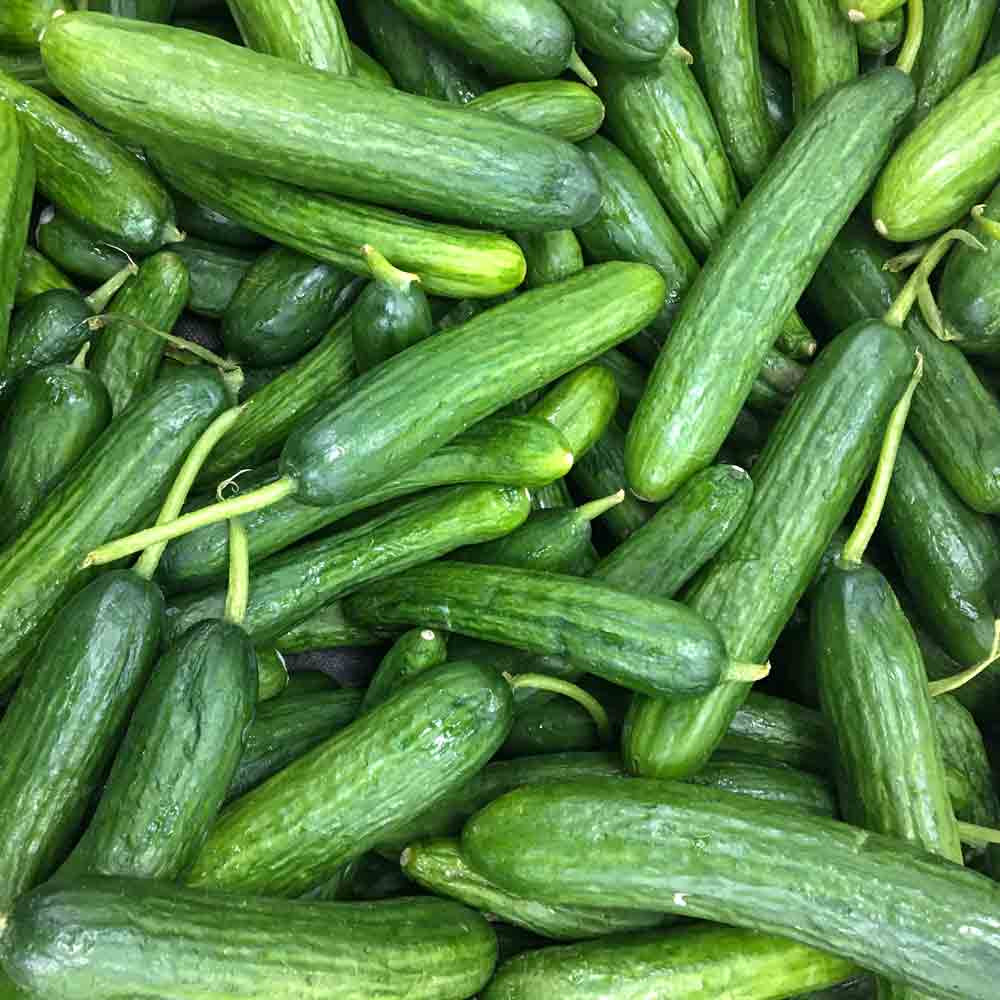 The Beit Alpha cucumber was bred specifically for early, sweet, burpless, and prolific characteristics in the Beit Alpha kibbutz of northern Isreal during the early 1930s and has become one of the most popular varieties worldwide.

As a bonus, it is also one of the most disease-resistant varieties available, including powdery mildew, and produces well in both hot and cool weather.

Vines are easily trellised and usually top out at a convenient 6' height, the strong, thick stems easily support fruit that can grow to 12" but is most often picked at 5 - 6" for fresh use or pickling. Plants are vigorous and readily set large flushes of flowers followed by tiny cucumbers that mature quickly. Continuous harvesting of mid-sized fruit encourages more production. Sometimes a bit slow to start, it always quickly picks up flowering to produce bounties of fruits.

Abundant foliage helps shade the soil and young tender fruit from the sun. Considering it was bred in a desert, this cucumber is surprisingly tolerant of cool temperatures and is noted for being one of the most disease-resistant cucumber varieties.

The fruits are blocky with smooth dark green skin and sweet, crunchy flesh, and mild skin that doesn't need to be peeled.

Hanka Lazarson began breeding what would become the Beit Alpha cucumber in 1931 at the Beit Alpha kibbutz in northern Isreal, in the fertile soil of the Harod valley of lower Galilee. She started with the local Damascus cucumber that had a desirable thin skin and good flavor but uneven growth and significant variation.

The goal was to develop a consistently sized fruit with a juicy flavor and fine texture with a high yield for the varied climates of Isreal and the Middle East.

Her team began distributing the initial seedstock to regional farmers in 1936, while they continued to refine and select for the best traits over the next 30 years.

Since then, the Beit Alpha variety has become the foundation stock for many cucumber strains, both hybrid and open-pollinated. We offer the open-pollinated variety that is close to the original strain that founded a dynasty of beloved cucumbers. This variety has both male and female flowers so does not depend on pollinator action to set fruit.

Middle Eastern immigrants brought the Beit Alpha seeds with them wherever they settled around the world, introducing their favorite cucumber with their new neighbors.

Planting seed in one-month intervals will ensure an almost continual harvest, but be aware that you may be drowning in cucumbers! Only do this if you are needing a large number of fresh cucumbers for pickling or preserving, or feeding several families.

These are an excellent choice for home gardens, farmer's market or CSA growers. 2 - 3 plants will often supply plenty of fresh cukes for smaller gardens.

The flavor will be sweetest and juiciest when planting seeds in fertile soil.

Cucumbers grow straighter on a trellis or fence and can curl when grown on the ground. Trellising takes up less ground space while giving shade for tender plants underneath, keeps the fruit cleaner, and saves time harvesting as you don't have to hunt for the young ripe fruit.

Harvest Beit Alpha cucumbers a bit smaller than other types, sometimes as small as 3" for baby pickles or petite salads, or up to 5 - 6" for dill spears or fresh slices for salads or sandwiches. Cut the stems from the plant with garden scissors or a knife instead of pulling to prevent tearing of the stem into the plant.

Overripe fruit will be bitter but are perfect for saving seed.

MSRP:
Now: $3.35
Was:
Boston Pickling Cucumber - An Old Favorite Considered by many as the standard for home-made pickles, it always gives high yields of short, blocky, thin-skinned cucumbers with crisp, solid flesh...

MSRP:
Now: $3.35
Was:
Crystal Apple Cucumber - Fine Crystal for Your Garden These small 3" oval fruits are about the size of a small apple with a creamy pale greenish-white color and mild, almost slightly sweet flavor...

MSRP:
Now: $3.35
Was:
Everbearing Cucumber - Top Producer Continually produces fruits for the entire season if kept picked, living up to its namesake. It does its job with great regularity, earning it a perennial spot in...

MSRP:
Now: $3.35
Was:
True Lemon Cucumber - A New Love in Your Garden Lemon-like in color, size and shape, the True Lemon Cucumber's white flesh is sweet with a superb crunch. They start producing a little later...

MSRP:
Now: $3.50
Was:
Rocky Mountain Bee Plant - Feeding Multitudes of Pollinators Bee plant is a gross understatement of the riot of noise and activity, color and scent this plant brings, attracting hundreds of bees,...

MSRP:
Now: $3.35
Was:
Everbearing Cucumber - Top Producer Continually produces fruits for the entire season if kept picked, living up to its namesake. It does its job with great regularity, earning it a perennial spot in...

MSRP:
Now: $24.05
Was:
Butterfly Pavilion Seed Collection - a Garden of Butterflies and Pollinators Have you ever visited a butterfly pavilion, where hundreds or even thousands of different, multi-colored butterflies fly...

MSRP:
Now: $4.60
Was:
Achocha - The Unknown Cucumber Relative Achocha/Caihua (pronounced kai-wa) is a slender tropical vine with long tendrils for climbing originally from South America. Domesticated in the...