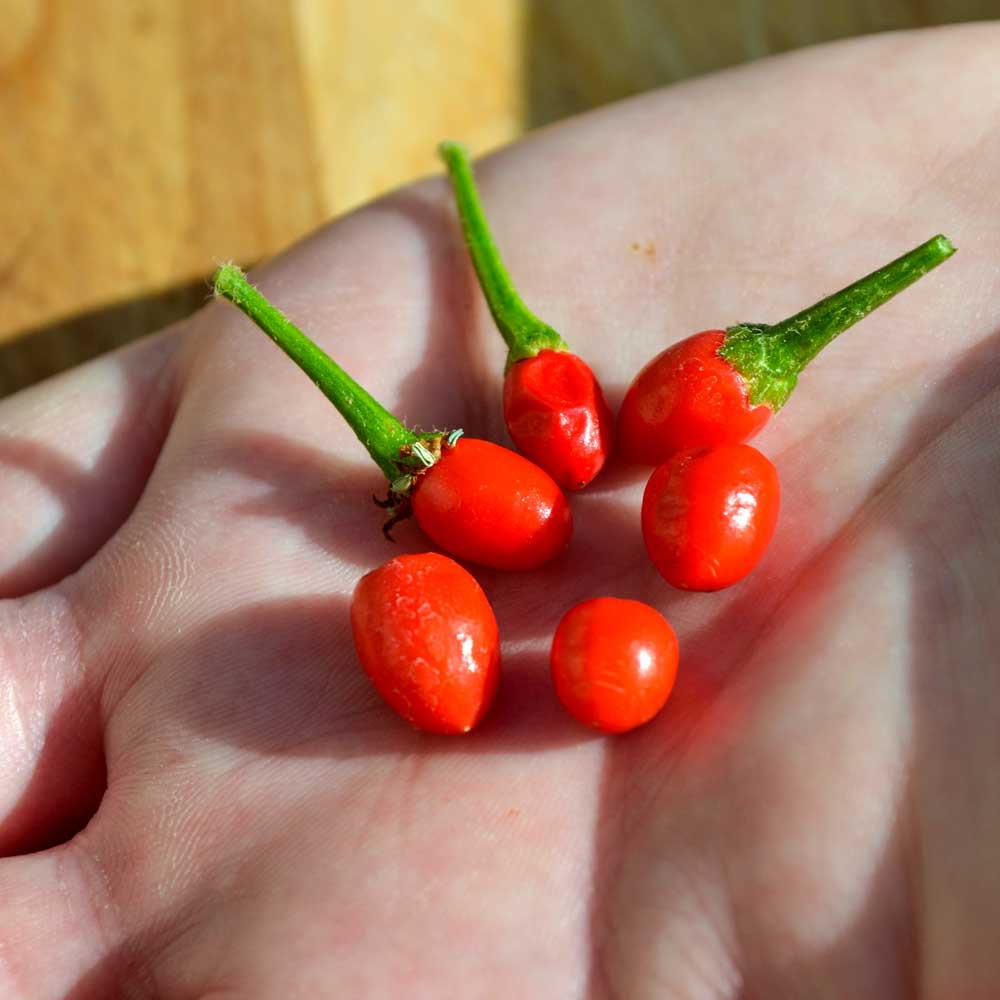 Chiltepin Pepper - Mother of All Peppers

Looking more like a small round berry than a chile, the Chiltepin – pronounced “chill tuh peen” – is one of the oldest of the very few remaining wild chiles still available. Considered by many to be the mother of all chiles, it is the only indigenous pepper to the U.S., still growing on shrubs under nurse plants in canyons throughout southern Arizona, New Mexico, Texas, and northern Mexico.

Its name comes from the Aztec Nahuatl language – spoken when Cortés arrived and still used today by approximately 1 ½ million people in Mexico – of  chiltecpin, “chilli” + “tecpintl”, meaning “flea chile”. The pea-sized scarlet berries are an irresistible snack to the wild birds who are credited with their spread from South America all the way up to the southern U.S. and why they are also known as “bird peppers” in the Southwest.

On first taste, the heat is intense and unapologetic, coming on fast and strong – the flavor introduces itself later. The heat quickly passes, leaving you with a fruity, mineral flavor described as “the lingering taste of the thirsty desert earth itself,” by Dr. Gary Nabhan in his Chasing Chiles book.

The fruit are usually the size of a pea and ripen from green through orange-red to full deep scarlet red when mature. They are erect, growing on top of the stem, above bright green pointed leaves on short bushy shrubs in protected areas. Fruit production is prolific; one bush can yield up to a hundred tiny flavor bombs. Perennial in their home environment of Central America and Mexico, they are usually annuals in most places in the U.S. except in very southern climates that don’t freeze.

In the wild, Chiltepins need more moisture and shade than the Sonoran desert provides, so they grow under nurse plants—vegetation that gives shade and shelter where moisture gather and seeds can germinate. Mesquite, ironwood, and hackberry are the most common nurse plants in the wild.

Southern Brazil or Bolivia seems to be the origin of the wild chiltepins, but this is hard to prove because of the prolific dissemination by wild birds who find the scarlet berries an irresistible snack. The birds don’t taste the capsaicin which gives all chiles their heat, and the seeds pass through the birds' digestive systems. Wild chiltepins were often found growing along fence rows and under trees or anywhere birds would roost, migrating up through Central America and Mexico into the American Southwest.

Aztecs gave it the name most known today, but it has a rich history with native people from Central America north into Mexico and as far as the southwestern United States. It has long been used by native people to spice food, as a food preservative, and as a medicine.

Even Thomas Jefferson enjoyed the heat and flavors, as he first acquired seed in 1812 from Captain Samuel Brown who was stationed in San Antonio, Texas. He recorded planting chiltepins in pots and in his kitchen garden in 1814.

Chiltepins are historically used when ripened to a bright scarlet red color, but some chefs and home cooks have recently been experimenting with the green stage for different flavors. It’s easier to see when they are fully ripe, as the bright red spots catch your eye.

After picking, they are most often dried in the sun to a brittle stage that crumbles easily between your fingers. They can be used like hot chile flakes, or soaked in a little water or vinegar for a few minutes to create a chile water to flavor and spice soups, stews, rice, or bean dishes.

In Mexico, chiltepins are often paired with fish, where the quick heat is reminiscent of wasabi, a technique that has caught on with chefs around the U.S.

Historically, no kitchen table of Sonorans, Opatas, O’odham or Yaqui rural homes would be without a bottle of dried chiltepins. Today, those same homes might have a bottle of pickled chiltepins, crushed and mixed with wild oregano, garlic, and salt as a tabletop condiment. It is eaten sun-dried, added to cheese and ice creams, fermented into sauces, or mixed with wild greens and onions as a typical Sonoran dish.

It’s pungent flavor can be extreme - depending on the growing season - followed by its quite distinctive smoky aftertaste. The flavor profile is often described as an initial burst of high heat followed by a complex taste of fruit and citrus notes finished by toasted or smoky elements.

In our domesticated gardens, chiltepins prefer partially shaded to shady locations with a bit more moisture than some other chiles. Using garden vegetables as nurse plants works well - such as tomatoes, trellised peas, and the afternoon shade from corn.

They grow well in pots, often living for multiple years if brought in during the winter.

Use gloves to harvest and handle fresh chiles, as the capsaicin can linger on your fingers for hours, causing unexpected burns to eyes and sensitive skin.

MSRP:
Now: $3.30
Was:
Jalapeño M Hot Pepper - The Original Jalapeño An improved historical pepper that is ubiquitous in Mexico and the American Southwest. It has a medium heat with a great flavor either green or red...

MSRP:
Now: $3.65
Was:
Lemon Drop Hot Pepper – Addictive Spicy Citrus Flavor For those who love their chile heat with a citrus tang, this is the pepper to know and grow. Also called Aji Limon or Lemon Chile and very...

MSRP:
Now: $3.30
Was:
Tabasco Pepper - Avery Island Original These highly prolific peppers have a surprising heat level that comes on immediately and lasts longer than expected. The 2" long peppers grow upright on...