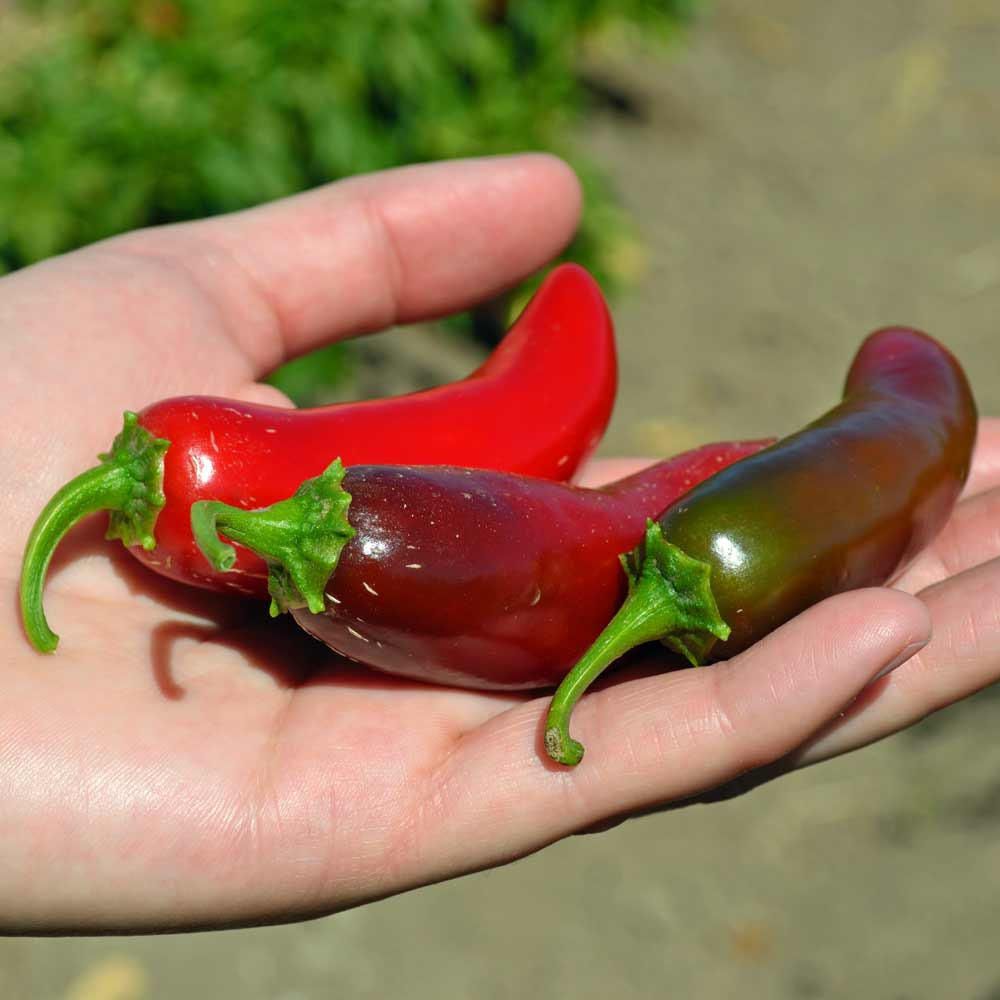 An improved historical pepper that is ubiquitous in Mexico and the American Southwest. It has a medium heat with a great flavor either green or red. Named for Xalapa in the state of Veracruz, Mexico it is used green for pickling, stuffing, roasting and salsas.

Once fully ripened to a gorgeous brick red color, it is mesquite-smoked to become chipotle. Also strung on ristras for easy access or dried and crushed for a hot chile powder. Extremely productive over a long season.

Fruits are usually about 3” long and 1” in diameter, sausage-shaped with a blunt end and have shiny skin. They ripen from deep green into greenish-purple, then to a deep fire-engine red when fully mature and grow pendant, or downwards. Plants are short and robust, growing to 18 - 24” tall with lots of leaf canopy that helps shade the ripening fruit.

Blossoms will appear singly at first, then in bunches, followed by ripening fruit. A deep green c plant in full production loaded with maturing red fruit is a sight to see! In fertile soil, production is prolific, often topping 20 - 30 fruits per plant, so be prepared to share with neighbors and friends, along with lots of cooking.

Jalapeño is one of the most well-known spicy chiles (or peppers if you prefer) around the world and originated around the city of Xalapa in the state of Veracruz, Mexico - due East from Mexico City and almost on the Gulf of Mexico. Its name literally means “from Xalapa” and was changed to Jalapa – and thus jalapeño. The name Xalapa is itself of Nahuatl origin, formed from xālli "sand" and āpan "water place". It is thought that the ubiquitous jalapeño pepper is several thousands of years old.

Bernardino de Sahagún, a Franciscan friar, missionary priest, and pioneering ethnographer came to Mexico – known as New Spain at the time  – in 1529, learned Nahuatl, the Aztec language, and spent more than 50 years in the study of Aztec beliefs, culture, and history. Sometime after 1545, he wrote in the Florentine Codex describing the long-established Aztec markets selling fresh jalapeños alongside chipotles (smoked jalapeños), and sauces made from them.

Because jalapeños are one of the most well-known and widely used chiles today, there are almost unlimited ways to use them. Salsas, either fresh or roasted, are a great starting place to enjoy the flavors. Pickled jalapeños, with or without garlic and onions, are an excellent ingredient for nachos, breakfast burritos, queso, or any dish where the pickled bite can contribute to the flavors. Vinegar based hot sauces are a delicious way to use and preserve an overabundance of fresh ripe red chiles. Drying is yet another way to preserve a large harvest - dry them in a food dehydrator or oven at about 150°F for several hours until the chiles crackle when broken, then either store whole until needed or grind them into powder for the best home-made chili powder you’ve tasted!

Small white lines often appear along the chile’s skin during ripening, sometimes described as cracks. They are actually scars from the peppers growing faster than the skin and known as “corking”. This is completely normal as the peppers heal and form the lines. Many chefs, home cooks, and gardeners consider this a desirable characteristic that shows the pepper was grown in good conditions and has great flavor.

Corking does not mean the chile is spicier!

MSRP:
Now: $3.65
Was:
Red Peter Pepper - Spice Up Your Garden You should grow this chile despite its unusual shape. Appearances aside, this is a surprisingly good pepper with an excellent flavor balanced by a good amount...

MSRP:
Now: $3.30
Was:
Poblano/Ancho Pepper - Fresh or Dried This thick-walled stuffing pepper is 4" x 2 1/2" at shoulder and turns from black-green to red-brown when ripe. Concentrated fruit set on beautiful 2-3'...

MSRP:
Now: $3.65
Was:
Beaver Dam Hot Pepper A Hungarian heirloom pepper brought to Beaver Dam, Wisconsin in 1912 by the Joe Hussli family. Tapered fruits are crunchy and mildly hot when seeded. They mature from...

Chile de Agua Hot Pepper - Treasure of Oaxaca  A triangular, conical shaped pepper about 4" long and 1 - 1 1/2" wide at the shoulders, tapering to a pointed tip. The skin is shiny, smooth and...