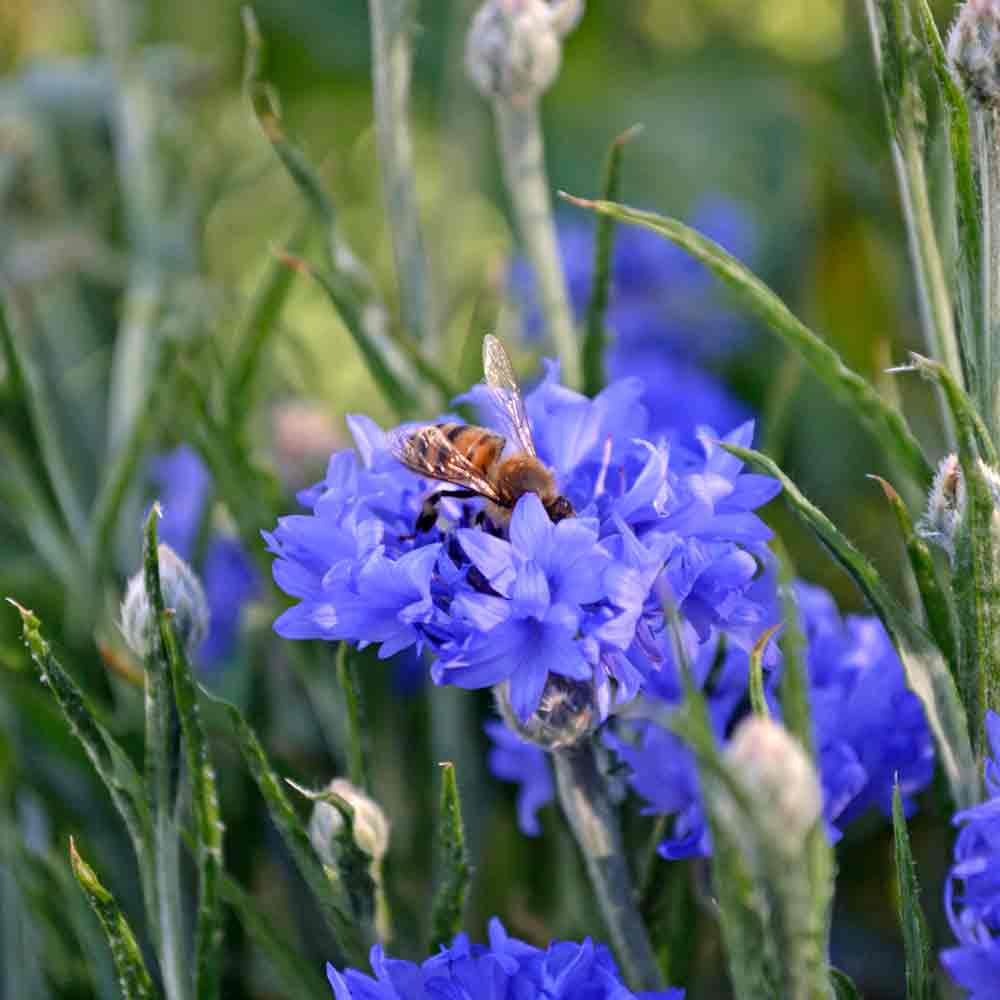 Given a chance, they will also brighten up a dry, difficult area when combined with red poppies, orange cosmos, or yellow marigolds. Even by themselves, they will turn a barren area into a ribbon of low-maintenance country blue you’ll never tire of admiring.

All gardeners need at least one can’t-fail flower they rely on, and this reliably gorgeous blue, lightly fragrant flower belongs in every garden.

Often worn in lapels of courting gentleman in years past, giving it the common name bachelor button.

Quick-growing single to fully double showy flowers look like miniature carnations, in colors from Azure to Indigo on multi-branching stems usually reaching about 30” with a spread of 10”.

Bachelor buttons is a robust, low-maintenance plant. In fact, it’s so easy to grow, it’s widely used in children’s gardening. Once established, it grows back year after year as it freely reseeds, making it a good choice for xeriscaping.

They are happy growing just about anywhere, from USDA Hardiness Zone 3 through 11. Plant the seed during the cool season as they will decline as the weather heats up.

They are the national flower of France, Germany, Estonia, Belarus and the Czech republic.

Bachelor buttons originated in Turkey and south-eastern Europe and spread through grain trade throughout the world. Cornflowers grow very well in fields of grain and their seed is similar in size and weight to most grains, sorting them out was difficult so grain became a primary method of travel.

Cornflowers are old enough to have been grown and respected by the ancient world. Both Egyptians and Greeks knew and used them extensively. The remarkably well preserved floral funerary collar of King Tutankhamun - buried circa 1340 BC - contain olive leaves, cornflowers, and poppies.

Archaeological evidence shows bachelors buttons appearing in England in the middle to late Iron Age and the Netherlands in the Middle Ages with the widespread planting of rye. Both appearances are traced to trade, especially grain trade.

Bachelor buttons were used historically for their blue pigment, and the dried flowers are often an ingredient in tea blends and herbal teas. The edible flowers have a sweet/spicy flavor often described as somewhere between cloves and black pepper, with field green undertones. Others say it has notes of cinnamon, making it perfect for the kitchen garden to jazz up salads.

They are traditional English cottage garden and meadow choices, but make great cut flowers and dry very well. Cornflowers excel in cutting gardens, beds, borders, meadows, and prairies. Their bright blue blossoms and nectar content are highly appealing to bees and butterflies, boosting the yields of tomatoes, squash, and all other plants relying on pollinators.

Sow seeds outdoors just before or after the last frost, or at the beginning of the cool season for warmer climates. Plants will struggle and flowers will decline once the weather heats up.

Bachelor buttons grow well in almost all soils, but they prefer well-drained soils best. Will tolerate poor soil and both high and low pH, even very alkaline western soils. Needs moderate moisture to become established, but will tolerate drought once the roots are established. It cannot grow well in heavy shade, needing at least partial sun.

Once harvested, flowers become a long-lasting display in cut flower arrangements. For the best results, harvest just before they are fully open when the centers are still curving inward. Collect in the morning, when the stems are still full with water.

MSRP:
Now: $3.30
Was:
Dwarf Sunspot Sunflower - Snow White Would Be So Happy! These dwarf sunflowers only grow 2-3 feet tall, and is one of the easiest flowers to grow in any garden. Makes a huge statement and catches...

MSRP:
Now: $3.30
Was:
Dwarf Sugar Pea - Colorful Blossoms One of the earliest, dwarf edible sugar pod peas around. Popular for the colorful blossoms, shoots and leaves as well as its prolific crop of curved small...

MSRP:
Now: $3.30
Was:
Fire Chief Dwarf Petunia - First True Red Aromatic Blossoms Fire Chief is the first true red petunia to be introduced and of the 45 pre-1960 All-American Selections award-winning petunias, the only...

MSRP:
Now: $3.30
Was:
Evening-Scented Stock Pretty purple and lilac flowers are small but their fragrance in the evening is unforgettable. Leaves are usually a gray-green and the perfumed flowers can be produced from...

MSRP:
Now: $3.30
Was:
Red Corn Poppy - The Remembrance Poppy A deep, almost blood red poppy with plants that grow 12 – 30" tall and are very attractive to pollinators. Direct sow in early to late spring for a...